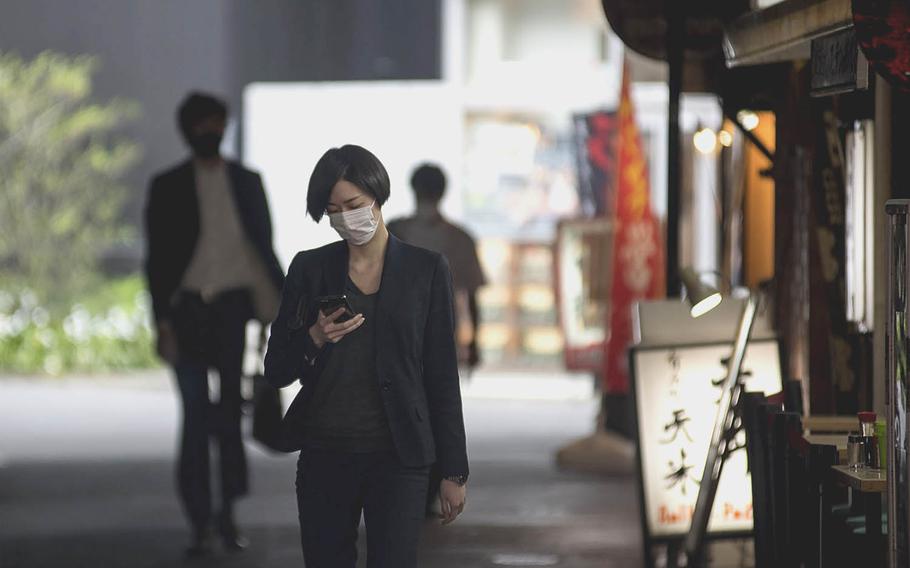 Buy Photo
A woman in a protective mask walks through a park in central Tokyo on April 13, 2021. (Akifumi Ishikawa/Stars and Stripes)

TOKYO – A relatively quiet Wednesday passed for U.S. military commands in Japan and South Korea, which reported just a few fresh coronavirus cases as of 6 p.m.

All three new patients tested positive for COVID-19 at Camp Hansen, according to a Facebook post by Marine Corps Installations Pacific.

Tokyo reported another 843 had contracted the virus Wednesday, according to public broadcaster NHK. That’s the city’s highest one-day count since a state of emergency there ended March 21, according to metropolitan government data.

Osaka prefecture, the country’s next largest metro area, reported 1,242 new coronavirus cases Wednesday, its highest one-day count to date, NHK reported. Osaka has reported more than 1,000 new patients on eight of the past nine days, according to its coronavirus tracking website.

Osaka Gov. Hirofumi Yoshimura has asked the government for an emergency declaration more stringent than the largely unenforceable periods imposed over the winter.

Japan’s 542,467 COVID-19 cases and 9,682 deaths, thus far, are low in comparison to other nations, but the country has been slow to administer vaccines obtained from abroad or develop its own.

The government has asked Pfizer for another 50 million doses in addition to the approximately 144 million it already contracted for, NHK reported Wednesday.

As for U.S. troops, civilians and their families overseas, they should be able to make an appointment to get vaccinated through their immediate military health-care facility, Pentagon spokesman John Kirby said during a media briefing Monday.

However, a DOD-ordered pause on distribution of the one-shot Johnson & Johnson vaccine has meant delays at bases in Japan and South Korea that planned to administer that vaccine.

At Yokota Air Base in western Tokyo, for example, appointment availability “is limited to vaccine supply,” and none of the two-shot Moderna vaccine is available for first doses, according to a base Facebook post Wednesday. It advised its population to hold off calling the base immunization clinic for appointments. Anyone due for a second dose should make an appointment through their unit, the base said.

The air base directed its people to a shot clinic Friday at Yokosuka Naval Base, where any eligible beneficiary may sign up, although some may be placed on standby.

Osan Air Base in South Korea is also waiting on the Johnson & Johnson pause to lift or for Moderna shipments to arrive. It shut down its vaccination point at the base officer’s club and switched distribution to the immunization clinic April 15, according to a base Facebook post.

DOD ordered the Johnson & Johnson pause based on recommendations by the Centers for Disease Control and Prevention and the Food and Drug Administration after six people out of more than 6 million inoculated with the vaccine developed very rare and dangerous blood clots.

Before the pause, Osan had inoculated 12,500 people, of whom 7,600 are fully vaccinated, according to the base.