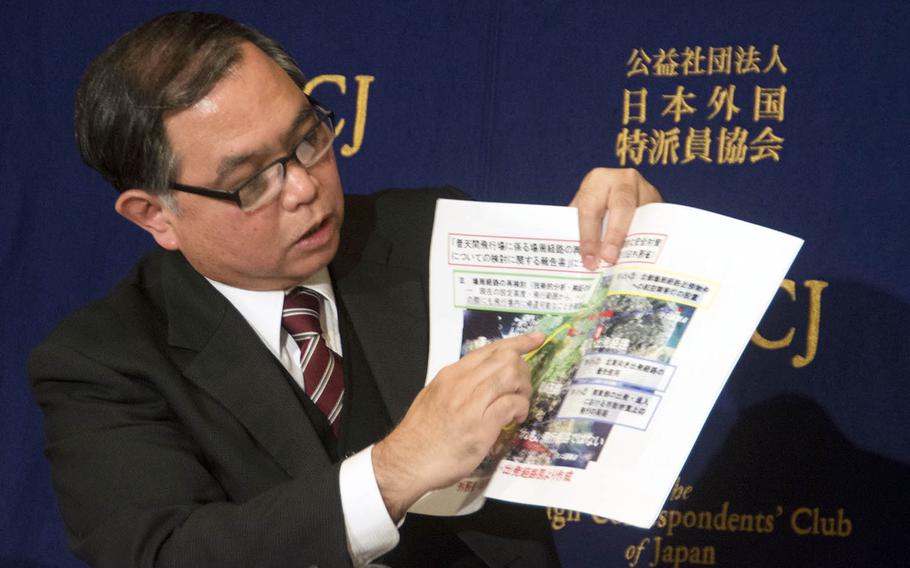 TOKYO – Okinawans angry about parts falling from U.S. military aircraft have taken their concerns to their nation’s capital.

In December, workers discovered a small part from a Marine Corps CH-53E Super Stallion helicopter on the roof of Midorigaoka nursery school, about 300 meters from Marine Corps Air Station Futenma. A week later, a Super Stallion’s window dropped onto a sports field at nearby elementary school, where more than 50 schoolchildren were playing.

The nursery school’s headmaster, Takehiro Kamiya, told reporters Wednesday at the Foreign Correspondents’ Club of Japan that 20 to 30 children were playing outside when the cylindrical, 4-inch-long part fell onto their roof.

“It was fortunate that no child was hurt but … it could have been a major catastrophe with a slight difference,” he said.

Kamiya showed a photo of the object and held up a map displaying official flight paths for Futenma aircraft and the location of his school, which he said is supposed to be outside those paths.

“Every day, U.S. military helicopters and Ospreys fly over our nursery school,” he said.

“There have been no apologies and no explanations of any kind to date.”

The Marine Corps takes the report of the falling object seriously and is actively investigating the incident working closely with local authorities, Marine 1st Lt. Karoline Foote, a spokeswoman from the 1st Marine Aircraft Wing, said in an email to Stars and Stripes after the incident was reported.

“We care deeply about the safety of our friends and neighbors in the communities around which we live and operate,” she said.

Last month, Defense Secretary Jim Mattis apologized to his Japanese counterpart, Itsunori Onodera, for a string of recent aircraft mishaps, including the emergency landings of Okinawa-based Marine Corps helicopters. He also vowed to address the “important” issue of aircraft safety.

However, the nursery school and parents want the Marines to halt flight operations until they find out what happened.

Tomoko Miyagi, president of the facility’s parents’ association, also spoke at Wednesday’s press conference. She said her group has submitted a petition signed by 126,000 people calling for the suspension of military aircraft flights over the school to Japanese government officials.

Another parent, Yukiko Chinen, said officials in Tokyo didn’t seem serious about responding to their concerns.

“It seems to us that our country is protecting U.S. forces rather than the schools and our children,” she said while wiping away tears.

The nursery school was built in 1964, two decades after U.S. forces liberated Okinawa during World War II and built Futenma.

The American and Japanese governments are engaged in a complex process to move some U.S. forces off the island and relocate others away from heavily populated areas such as Ginowan, the city surrounding Futenma.

The southern island prefecture is strategically important to stability in the region and deterring aggression from China and North Korea.

However, Kamiya said North Korea’s nuclear and ballistic-missile threats are less of a risk than the U.S. military presence on Okinawa.

“Nothing would fall from North Korea on top of Okinawa,” he said. “Is it OK that our children are being sacrificed because U.S. forces are protecting Japan from North Korea?”