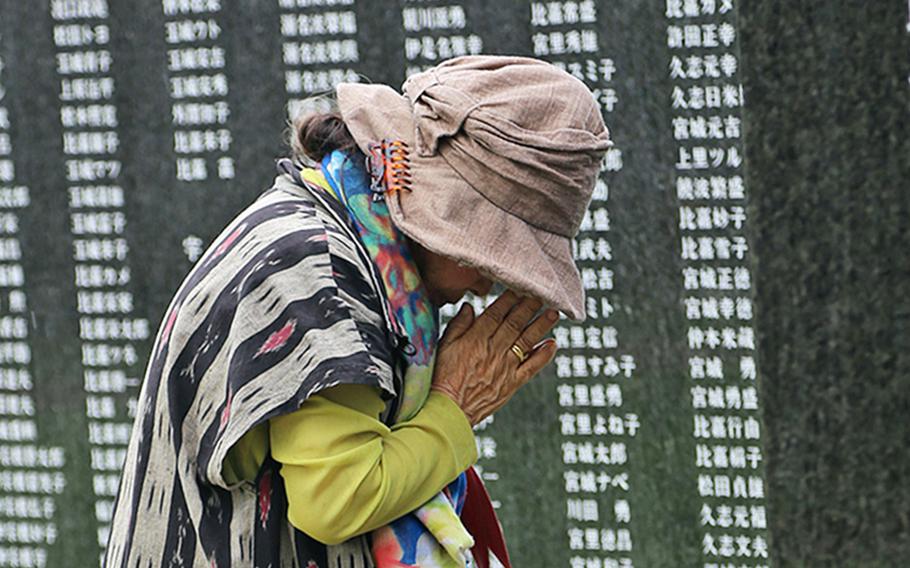 Buy Photo
A woman prays for loved ones lost in the Battle of Okinawa during the annual Irei no Hi ceremony at Peace Memorial Park in Okinawa, Japan, June 23, 2019. This year's ceremony was scaled down because of coronavirus concerns. (Aya Ichihashi/Stars and Stripes)

CAMP FOSTER, Okinawa — Japan marked the 75th anniversary of the Battle of Okinawa on Tuesday with a scaled-down, pandemic version of the annual Irei no Hi ceremony that drew less than a tenth of the attendees of years past.

The general public was told to stay home, though handfuls of locals who lost family in the battle during the final stages of World War II did turn out to pay their respects.

“It has been 75 years since the war has ended; however, the sorrow from losing beloved friends and family has never healed, it has only got stronger,” Okinawa Gov. Denny Tamaki said in his opening remarks. “It is our duty to keep sending the message of the terror of war and the importance of peace to the world.”

The Battle of Okinawa began on April 1, 1945, and lasted 82 days. More than 14,000 Americans, about 110,000 Japanese troops and at least 140,000 Okinawan civilians were killed during or after the fighting, though the total number of civilian deaths may never be known.

The battle rendered large swaths of Okinawa a scorched hellscape, more closely resembling the surface of the moon than the tropical landscape it is today. Reverberations are still evident in the island’s passionate anti-war movement.

For the Allies, the battle was pivotal. From airfields on Okinawa, U.S. troops began their final assault on the Japanese homeland. The war ended, however, with atomic bombings several months after the Battle of Okinawa.

The program for this year’s ceremony remained mostly the same as in prior years. Local officials, dressed in black funeral attire, sat in the Okinawa heat, underneath expansive white sunshades, flanked by food offerings for the deceased. A select group, including Tamaki, gave speeches. Then they each offered a single white flower at center stage.

Tamaki, elected in 2018 on an anti-base platform, used his remarks to highlight the number of U.S. military forces on the island. Okinawa, an area roughly the same size as metropolitan Tokyo, hosts approximately half of the 50,000 troops stationed in Japan.

“There are accidents and crime cases caused by the U.S. force personnel and civilian personnel, noise from the military airplanes, water contamination from the PFOS affecting the everyday life of people of Okinawa,” he said.

Abe vowed in his remarks to reduce Okinawa’s “huge burden” and to support the rebuilding of Shuri Castle, which burned down in October. The landmark was a keystone in the Japanese line of defense and fell on June 1, 1945, according to Encyclopedia Britannica.

“Over 200,000 innocent people were killed during the war and beautiful ocean and forest was also destroyed,” he said via video message. “My heart is heavy thinking of those lost lives — young people with dreams and future and the parents that died worrying about their children … we must pay the deepest respect for those lost lives.”

Tamaki asked everyone who could not be at Tuesday’s ceremony due to the coronavirus to pause at noon for a minute of silence. Marine officials said that they would be observing the request at bases across the island Tuesday.

“This battle was the largest amphibious assault undertaken by the U.S. Navy and Marine Corps in the Pacific theater and signaled the end of the massive island-hopping campaign by U.S. military forces,” III Marine Expeditionary Force commander Lt. Gen. H. Stacy Clardy III said in a statement to the force Monday on Facebook. “The harrowing battle that ensued was among the fiercest of the war. We owe those who struggled on this soil, military and civilian, especially the Okinawan people who endured so much during the battle, a great debt of gratitude.”

Army Col. Theodore White, commander of the 10th Support Group headquartered on Torii Station, said the alliance between Japan and the U.S. is the strongest in the region and can be traced back to an end of hostilities on Okinawa on June 22, 1945.

“So much has changed in the 75 years since the last shots fired in anger occurred on this island,” White said in a statement emailed to Stars and Stripes Tuesday.

“The strength of the relationship between the United States and Japan is a testament to the unifying principles driven by our common goal – peace and prosperity,” he said. “We were bitter enemies that waged a brutal battle leaving scars on this island still visible today and while time will heal the wounds from war, the scars will remain as a reminder what was … Let us find strength and comfort in our combined commitment to each other for a peaceful and prosperous future.”