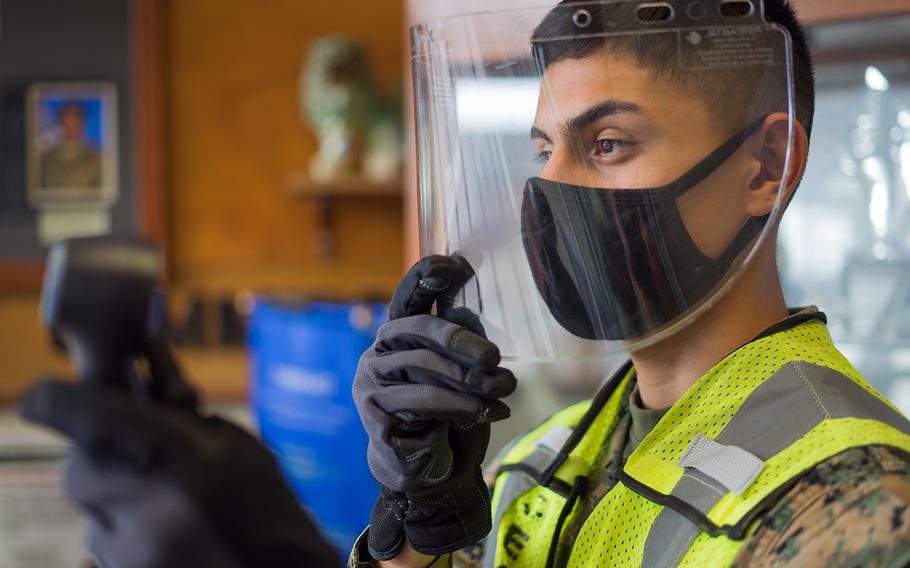 Meanwhile, the number of new infections outside the gates continued to climb. Okinawa on Thursday reported 49 new cases, according to a prefectural health official. Okinawa on Wednesday reported 44 cases, the highest daily toll since the pandemic began.

The Marines said four of its new cases had close contact with infected individuals at Camp Hansen; the fifth new case had contact with someone infected at Marine Corps Air Station Futenma, according to a Facebook post Thursday by Marine Corps Installations Pacific.

The new patients have been in quarantine for over a week and were tested as part of the Marine Corps’ policy to test all close contacts placed in quarantine. The Marines did not specify whether the individuals are service members, Defense Department civilian employees, contractors or family members.

“We continue to test large groups of individuals and have been re-testing many already placed in [restriction of movement] before they return to work,” the Facebook post said. “We are also phasing in a new policy to test all inbound personnel and will notify those who will be tested.”

The Camp Foster case was discovered during mass testing of 938 Japanese employees from Camp Hansen, MCAS Futenma and other bases on Saturday and Sunday, the spokesman said. All the test subjects had close contact with infected individuals.

The Marines said the likelihood the gate guard had infected others at Camp Foster is low due to a mask requirement and no-contact procedures at the camp gates, according to the Facebook post. “Close contacts of this individual have been placed in quarantine and contract tracing is being conducted,” the post stated.

The prefectural health official had few details on the MCAS Futenma employee, although that case is not tied to the outbreak cluster at that base. The worker started to experience symptoms and requested a test, the spokesman said.

Some government officials in Japan customarily to speak to the media on condition of anonymity.

While the rate of new cases among the U.S. military in Japan has started to fall, the number of new cases in some areas of Japan this week has surged.

Tokyo on Thursday reported a new high of 367 new cases, exceeding the previous daily high of 366 reported on July 23, according to public broadcaster NHK and the Metropolitan Tokyo Government.

After a two-month stretch without a new infection, the number of local cases on Okinawa has risen to 182 since July 8. The island has reported 325 cases since the pandemic began.

Also Thursday, the Marines reported another three people infected during the recent outbreak have recovered and were released from isolation. That brings to 148 the total number released so far this month.