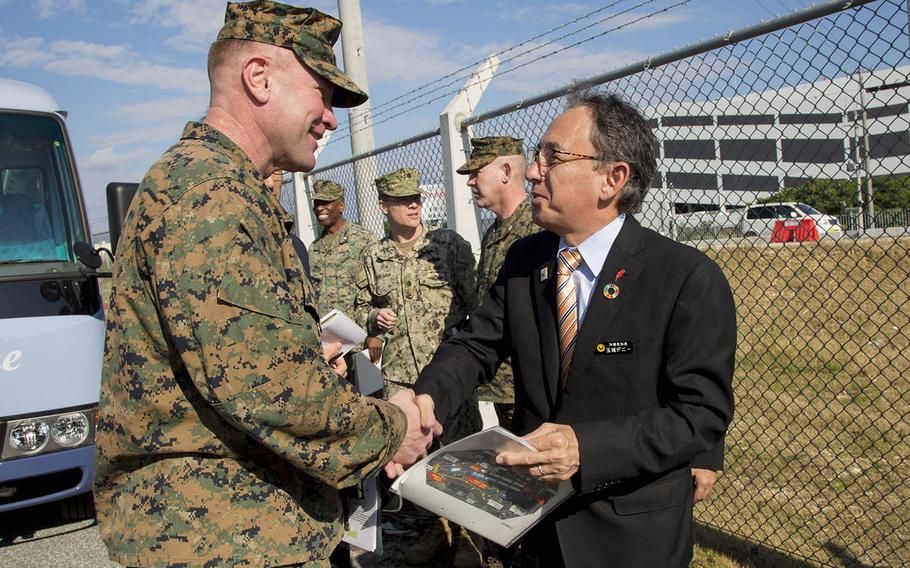 CAMP FOSTER, Okinawa – Okinawa Gov. Denny Tamaki is urging Tokyo and Washington to slash the U.S. military footprint on the island where some 30,000 U.S. troops are stationed.

Okinawa accounts for 70.3% of the total area in Japan occupied by U.S. bases, Tamaki told the prefectural assembly Tuesday in Naha, according to a copy of his remarks. He wants that number reduced to less than 50%, he told the assembly.

Tamaki for the first time set a target for an acceptable U.S. military footprint, an Okinawa prefectural spokesman for base affairs told Stars and Stripes by phone Thursday.

“Noise and environment issues and U.S. military-related incidents and accidents continue to occur because 70.3% of U.S. military facilities and areas continue to be concentrated on Okinawa, which is 0.6% of Japan’s land area,” the governor told the assembly.

Tamaki said he understands the necessity of the U.S.-Japan security alliance, but Okinawa shoulders an inordinate share of that burden.

“It is absolutely unacceptable,” he said.

Tamaki does not plan to target specific installations on the island for closure and has no timeline to make the reduction, his spokesman told Stars and Stripes. It’s customary in Japan for some government officials to speak to the media on condition of anonymity.

“The Japanese government will make its best efforts to ease the burden,” he said.

Next year, the prefecture will mark the 50th anniversary of its reversion to Japan from U.S. administration. The U.S. and Japanese governments have quietly been consolidating, closing and returning military land for years.

In 2016, the U.S. handed back nearly 10,000 acres of Okinawa’s Northern Training Area to the prefecture, an area twice the size of Kadena Air Base. That transfer reduced the American footprint on the island by 20%, U.S. officials said at the time.

That handover and a number of base closures were agreed upon during U.S.-Japan negotiations in 1996, among them Marine Corps Air Station Futenma.

The Marines plan to relocate the airfield from densely populated Ginowan city farther north to Camp Schwab along the coast of Oura Bay where a runway is under construction.

Tamaki said the moves, including the Futenma relocation, are “far from appropriate” and returning all bases south of Kadena would only reduce the occupancy rate to 69%. MCAS Futenma should be closed immediately and Marine air operations moved outside the prefecture, he told the assembly, a position he’s long held.