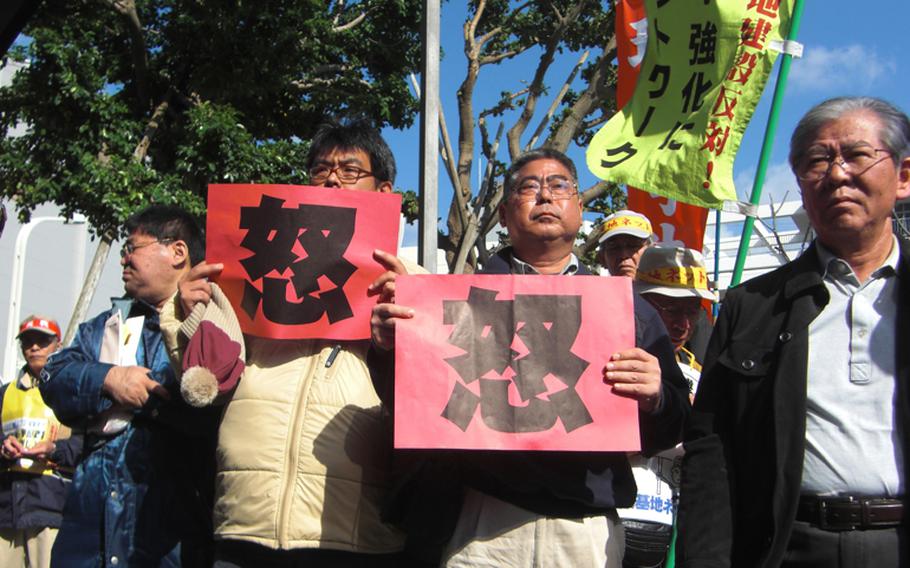 Buy Photo
Holding cards that read 'wrath' in Chinese, protesters assemble for a second day on Dec. 28, 2011, at Okinawa prefectural office in an attempt to block a controversial environmental assessment report from being submitted to Okinawa government. (Chiyomi Sumida/Stars and Stripes)

Buy Photo
Holding cards that read 'wrath' in Chinese, protesters assemble for a second day on Dec. 28, 2011, at Okinawa prefectural office in an attempt to block a controversial environmental assessment report from being submitted to Okinawa government. (Chiyomi Sumida/Stars and Stripes) 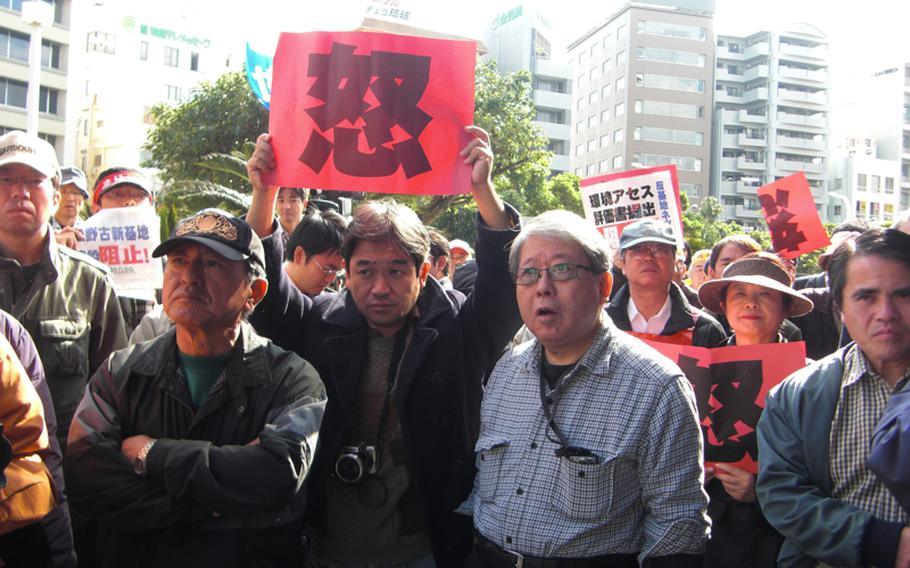 Buy Photo
Protesters express their outrage by hoisting red cards with a Chinese character meaning 'wrath' at the prefectural government office in Okinawa on Dec. 28, 2011. (Chiyomi Sumida/Stars and Stripes) 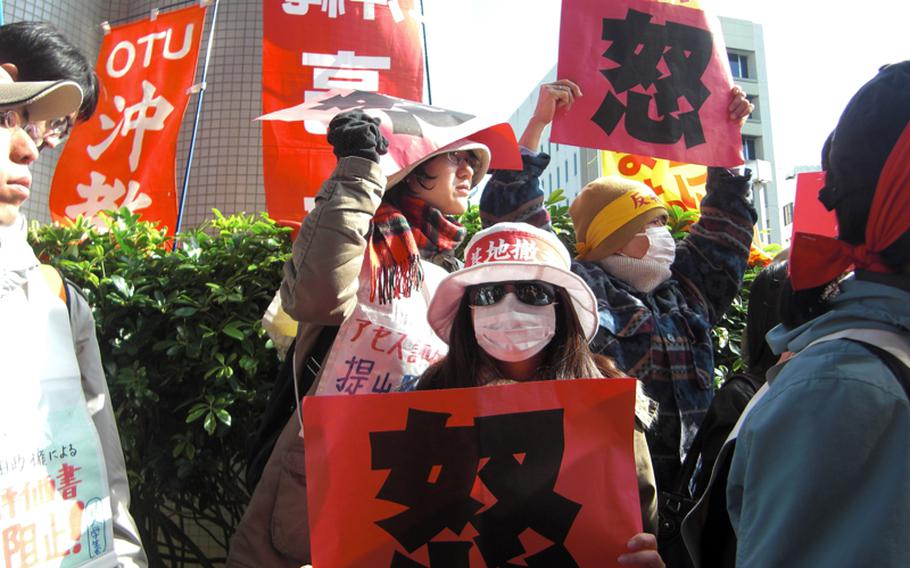 Buy Photo
Protesters wave red cards that read 'wrath' in Chinese after discovering that an environmental assessment report for a new Marine Corps runway planned to be built on Camp Schwab had been delivered to the Okinawa prefectural government office on Dec. 28, 2011, before office hours. (Chiyomi Sumida/Stars and Stripes) 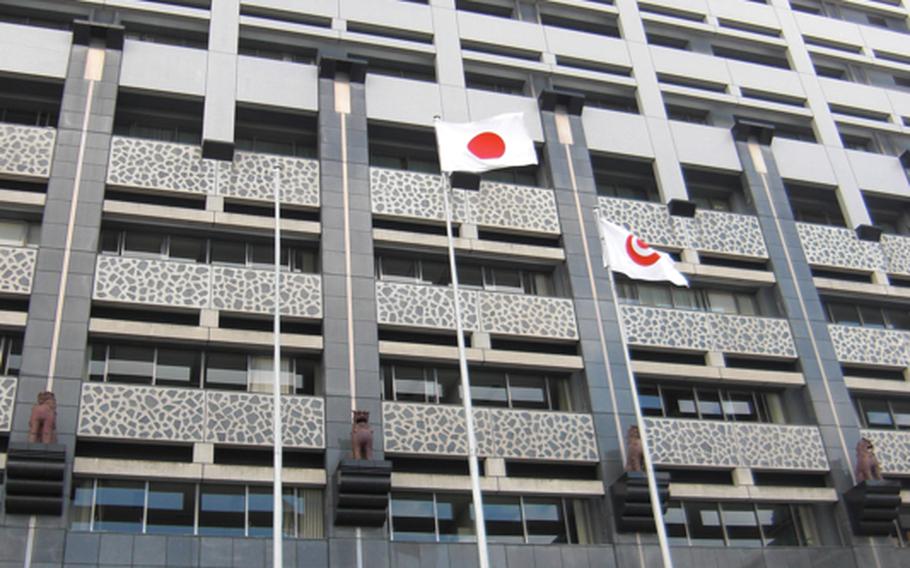 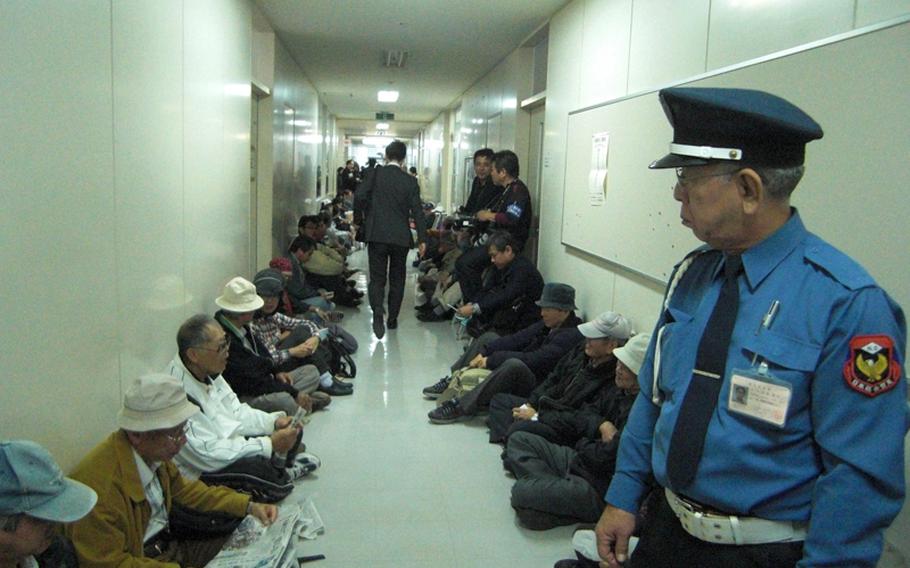 Buy Photo
Protesters stag sit-in Dec. 28, 2011, after learning that the Japanese Ministry of Defense had clandestinely delivered a controversial environmental assessment report for a new Marine Corps air facility planned on Camp Schwab to the prefectural government office early in the morning before business hours. (Chiyomi Sumida/Stars and Stripes) 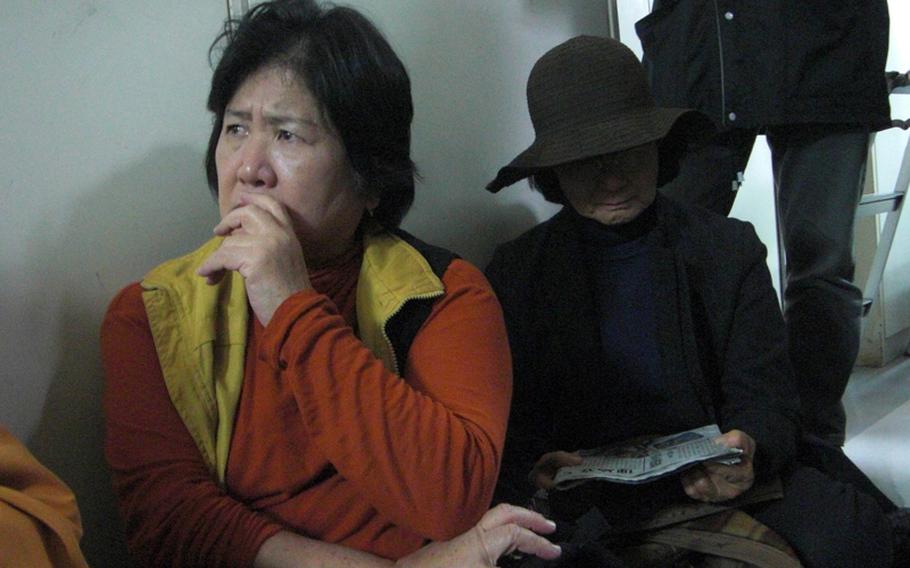 Buy Photo
A protester reacts to an announcement that Okinawa Gov. Hirokazu Nakaima accepted the environmental assessment report that had been delivered to the prefectural government office before office hours Dec. 28, 2011. (Chiyomi Sumida/Stars and Stripes)

CAMP FOSTER, Okinawa &mdash; The Okinawa governor&rsquo;s office Wednesday grudgingly accepted delivery of an environmental assessment report from the Japan Ministry of Defense, one of many steps required in the plan to relocate Marine Corps Air Station Futenma.

Protesters opposed to U.S. military presence in Okinawa had blocked the entryways to the prefectural offices for three days in an attempt to derail delivery and the relocation plan. The central government had been eager to complete the delivery by the end of the year in order to demonstrate to the U.S. that progress was being made.

Acquiescing to the protesters&rsquo; demand for a face-to-face meeting, Okinawa Gov. Hirokazu Nakaima descended from his office Wednesday evening, several hours after the complex had shut down for the six-day New Year holiday. He said he accepted delivery of the report because &ldquo;we have no alternative but to handle it appropriately.&rdquo;

Noting that he owed his election victory in part to his opposition to relocation of Futenma, he said, &ldquo;My stance to call for a move of Futenma operations out of Okinawa remains unchanged.&rdquo;

In a September speech, Nakaima said that forging ahead with the Henoko project could lead to an &ldquo;irreparable rift&rdquo; between Okinawans and U.S. forces.

The plan calls for moving the station farther north to Henoko bay, near the city of Nago.

Nakaima is required by law to submit his opinions on the assessment to Tokyo within 90 days of receipt. Tokyo will revise the report as needed after receiving the governor&rsquo;s input.

The report then undergoes a period of public comment, after which Tokyo will ask Nakaima for permission to reclaim part of the bay for construction of a runway. If he grants it, construction would begin. If not, Tokyo would have to either enact a special law or file a lawsuit.

Five sedans delivered 12 copies of the report around 4 a.m. Wednesday, long after most of the protesters had left. Returning that morning, protesters discovered the reports had been placed in the security guard&rsquo;s office, and they blocked stairs and elevators to the environmental office on the fourth floor, the final destination.

Okinawan members of Japan&rsquo;s parliament were outraged over the dead-of-night delivery, and seven lawmakers condemned it during a press conference Wednesday.

&ldquo;This act was like attacking someone while asleep,&rdquo; said Tokushin Yamauchi, a member of the House of Councillors. &ldquo;This unjust submission is a slap in the face to Okinawan people.&rdquo;

Protesters were heartened by one glitch in the delivery: Only 12 of the 20 copies required by law were delivered to the prefectural offices. Officials said they believed the remaining copies would be delivered before the new year.

The relocation of Futenma and a planned move of 8,600 Marines from Okinawa to Guam both face challenges in the coming year.

Congress and Japan&rsquo;s Diet are both poised to cut funding for the efforts in upcoming budgets and the Senate said it is planning to study the best way to station military forces in the Pacific region, which could produce alternative and less expensive plans.

Sen. John McCain, R-Ariz., who was among senators who called for the study, recently said the Futenma relocation and move to Guam could be replaced by joint basing agreements such as the one struck with Australia in November.