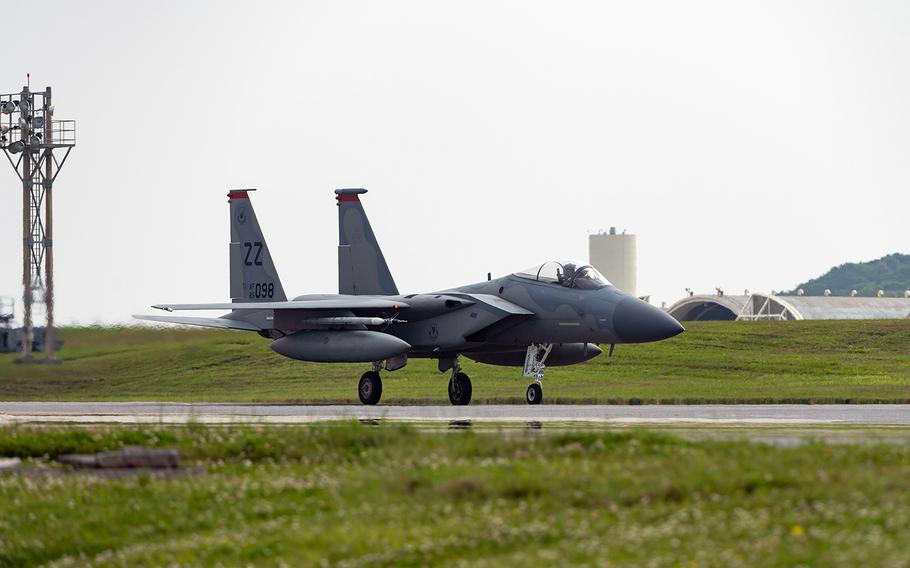 CAMP FOSTER, Okinawa — The 18th Wing at Kadena Air Base is investigating how one of its F-15C Eagle fighter jets lost a small cap Thursday during a joint exercise over southern Japan.

The Air Force reported the incident shortly before noon Thursday to Japanese authorities at the Kyushu Defense Bureau, a Japan Ministry of Defense spokesman told Stars and Stripes by phone Friday.

The hydraulic line filler cap, which is about 1.5 inches in diameter and 1 inch deep, is believed to have come unattached and fallen while the jet was approaching the runway at the Japan Air Self-Defense Force’s Nyutabaru Air Base in Miyazaki prefecture, according to an 18th Wing statement Friday.

Maintenance crews noticed the cap missing during a post-flight inspection, the wing statement said. No injuries or damage were reported following the incident and no aircraft fluids were released, according to the wing.

“The 18th Wing is looking into the cause of the incident,” the wing statement said. “We are committed to conducting safe flying operations while training with our bilateral partners in support of our alliance commitments.”

Nyutabaru Air Base is located on the eastern coast of Kyushu, approximately 50 miles north of the island’s southernmost Kagoshima prefecture.

The ministry spokesman declined to say where the jet was flying at the time the part is believed to have fallen due to “operational security.”

Wing officials said they believe the part fell within one or two miles of the approach end of the runway.

“We asked the U.S. military to check and maintain their jets more thoroughly and to take safety measures seriously to operate the jets,” the ministry spokesman said.