Officials predict success of U.S.-South Korea exercise could be tough to gauge The aircraft carrier USS George Washington moves through the Sea of Japan on Tuesday during the third day of the Invincible Spirit exercise the U.S. and South Korea have been staging to send a message of strength to North Korea. The exercise was scheduled to conclude Wednesday. (Jon Rabiroff/Stars and Stripes)

The aircraft carrier USS George Washington moves through the Sea of Japan on Tuesday during the third day of the Invincible Spirit exercise the U.S. and South Korea have been staging to send a message of strength to North Korea. The exercise was scheduled to conclude Wednesday. (Jon Rabiroff/Stars and Stripes) 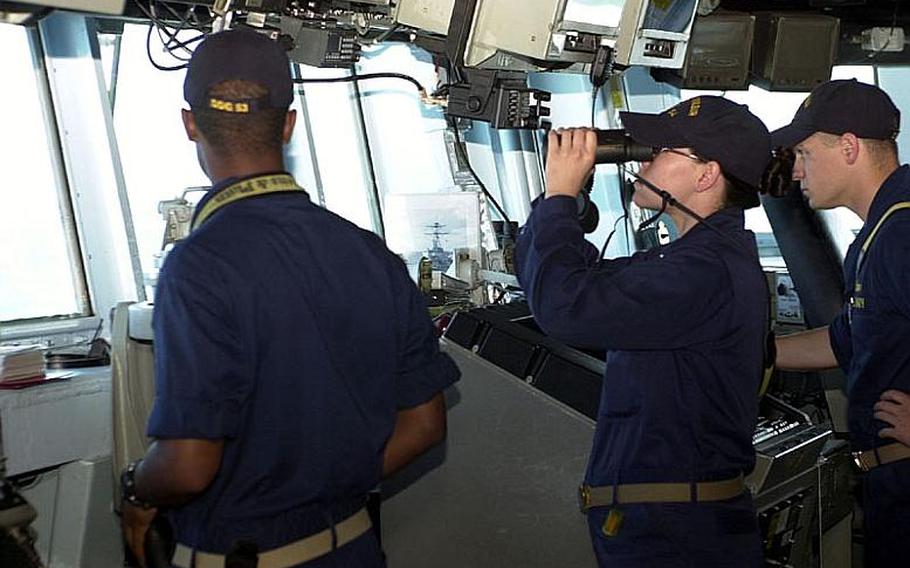 Crewmembers aboard the guided-missile destroyer USS Curtis Wilbur, based out of Yokosuka Naval Base, Japan, scan the horizon Tuesday during the Invincible Spirit military exercise the U.S. and South Korea have been staging off the east coast of the Korean peninsula. The exercise was scheduled to conclude Wednesday. (Jon Rabiroff/Stars and Stripes)

That&rsquo;s the question many will ask after Invincible Spirit &mdash; the four-day joint military exercise the U.S. and South Korea have staged off the east coast of the Korean peninsula &mdash; draws to a close Wednesday.

About 8,000 servicemembers, 20 ships and submarines and 200 aircraft were sent to the Sea of Japan to send a message of strength and deterrence to North Korea after the North&rsquo;s alleged role in the March 26 sinking of the South Korean patrol ship Cheonan and the deaths of 46 of its sailors.

Finding out whether that message was received will be difficult to gauge for a couple of reasons.

First, as Rear Adm. Dan Cloyd, commander of Task Force 70 and the man in charge of the U.S. part of Invincible Spirit, said early in the exercise: &ldquo;The message is in the eye of the beholder.&rdquo;

And, as several high-ranking U.S. military officials said in different ways throughout Invincible Spirit, leaders of the rogue North are erratic, unpredictable and irrational. So, figuring out if the massive exercise has intimidated, antagonized or mollified North Korea could be a challenge.

But Capt. Paul Hogue, commanding officer of the USS Curtis Wilbur, said Tuesday that the U.S. and South Korea had already accomplished their goal, no matter how North Korean leaders might respond. The two militaries got another opportunity to coordinate how they would work together in the event of war, he said, and North Korea clearly took notice.

&ldquo;I don&rsquo;t know if they got the message, but based on what I&rsquo;ve seen in the newspapers and online, they&rsquo;re paying attention,&rdquo; he said. &ldquo;I think the right signal has been sent.&rdquo;

Barring an eleventh-hour surprise, it appears North Korea will not make good on its threats to respond in a physical way or use a nuclear deterrent to what it said was a provocative exercise conducted by the U.S. and South Korea.

The exercise is the first of what the two countries said will be a series of joint drills conducted in the months ahead on the Korean peninsula and in the seas to its east and west &mdash; the latest in a string of military, economic and symbolic acts the U.S. and South Korea have taken to punish the North for its alleged role in the Cheonan incident.

Invincible Spirit has featured a variety of air, sea and underwater drills, including anti-submarine warfare exercises. As fighter jets spent a third day bookending aerial missions around practices of take-offs and landings on the deck of the USS George Washington, close to a dozen media representatives were flown from the aircraft carrier to U.S. destroyers to get a taste for what those combat ships were doing.

Officials onboard the guided-missile destroyer Curtis Wilbur said that in the first three days of the exercise they had practiced a variety of missions along with South Korean ships, including firing at a passing drone, taking control of an unfriendly vessel &mdash; played by an allied one &mdash; from air and sea, and tracking submarines.

Hogue said when it comes to figuring out how best to coordinate with the South Koreans, &ldquo;There&rsquo;s not much we really have to do. We&rsquo;ve been working together for &hellip; 60 years.&rdquo;

An interested observer aboard the Curtis Wilbur on Tuesday was South Korean Navy Lt. Kim Sung-joon, a combined-training officer who once worked with two sailors killed on the Cheonan.

&ldquo;Because (South Korea) has a very small navy, we are kind of a family,&rdquo; he said, adding that he thought the name of the exercise &mdash; Invincible Spirit &mdash; was a fitting description for the attitude of him and his counterparts.

Looking forward, U.S. military officials involved in the exercise said they stand ready in case called upon to defend South Korea from any aggression from the North, but stressed that disputes between nations are best settled over bargaining tables rather than across battlefields.

&ldquo;I think every misunderstanding &hellip; should be solved through political means,&rdquo; George Washington commander Capt. David A. Lausman said during the exercise.

The United Nations Security Council earlier this month issued a statement expressing &ldquo;deep concern&rdquo; about the sinking of the Cheonan, but stopped short of blaming North Korea.

&ldquo;The important fact is we all (need to) put our differences aside,&rdquo; he said.