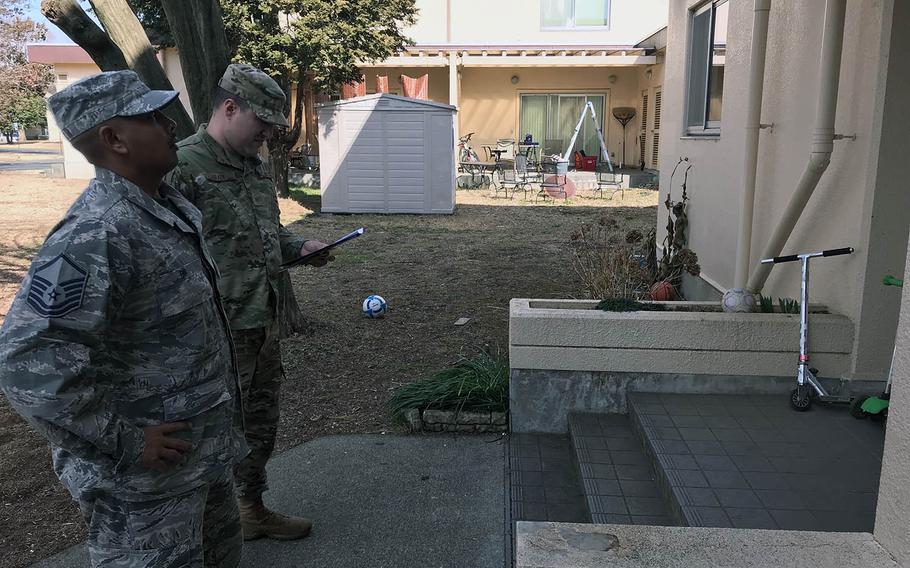 Master Sgt. Adam Brady, right, and Master Sgt. Paul On surveyed residents of Yokota Air Base, Japan, housing Friday, Feb. 22, 2019, about issues with their base homes. (Allen Onstott/Stars and Stripes)

Master Sgt. Adam Brady, right, and Master Sgt. Paul On surveyed residents of Yokota Air Base, Japan, housing Friday, Feb. 22, 2019, about issues with their base homes. (Allen Onstott/Stars and Stripes) 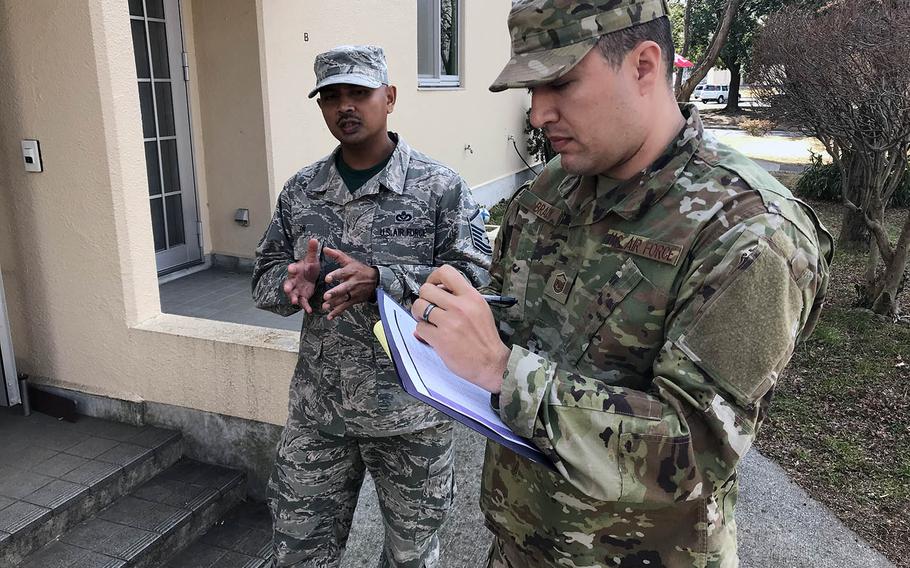 YOKOTA AIR BASE, Japan — Officials at U.S. military installations across the Far East are going door-to-door, holding meetings and seeking feedback from residents following recent testimony to Congress and media reports about health and safety issues in military housing.

The moves echo an effort on bases in Europe following testimony Feb. 13 about military housing before the House Armed Services Committee and a series of reports by the Reuters news agency that found housing at many U.S. bases was dilapidated and dangerous.

On Feb. 15, top military officials ordered commanders to inspect all housing for which they were responsible within 30 days and to hold town hall meetings.

For example, Air Force Secretary Heather Wilson and Chief of Staff Gen. David Goldfein directed commanders at every base worldwide to conduct a “100 percent review” of the condition and safety of all military housing by March 1, the Air Force said in a statement.

At Yokota Air Base in western Tokyo, 374th Airlift Wing commander Col. Otis Jones wrote to residents Wednesday to inform them that military leaders would come personally to base housing and speak directly to residents about health and safety issues.

After those house calls, base housing residents may expect “follow-up with a personal visit” prior to March 1 to “confirm that your concerns are being addressed appropriately by our housing team.”

Residents may choose no inspection of their home, but “your leaders will still reach out to each resident family to solicit your direct feedback, document your concerns, and understand your perception of the health and safety of your home.”

On Friday, Master Sgt. Adam Brady and Master Sgt. Paul On visited residents of Yokota’s eastside housing area to ask them about issues with their single-story row houses.

By early afternoon the pair had visited 47 out of 50 homes on their list but had found no major problems, Brady said.

“There are issues that Civil Engineering needs to identify but there is nothing that affects someone’s life or safety,” he said.

Eastside resident Margie Riddell, 40, of Dallas, said she had a visit from a survey team Thursday.

“They are taking it very seriously, which I think is the right response,” she said.

Riddell’s family haven’t had problems with military housing in Japan, although their home is smaller than they’re used to, she said.

Some other bases in the Far East are holding meetings to talk about housing issues.

Yokosuka Naval Base posted a flyer on its official Facebook page for a “Townhall & Housing Forum” to be held at the Community Readiness Center from 6.30 p.m. March 5.

In South Korea, meetings have been scheduled to discuss the housing and barracks issues at Yongsan Garrison and Camp Humphreys.

The Yongsan meeting will be attended by the garrison’s senior responsible officer, Maj. Gen. Daniel Christian, and is scheduled from 6 p.m. Wednesday at the South Post Chapel.