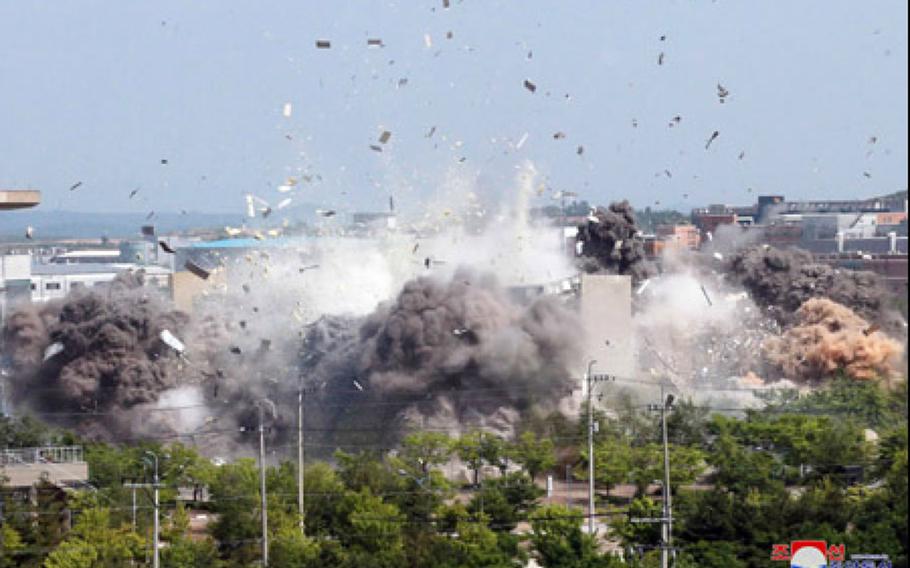 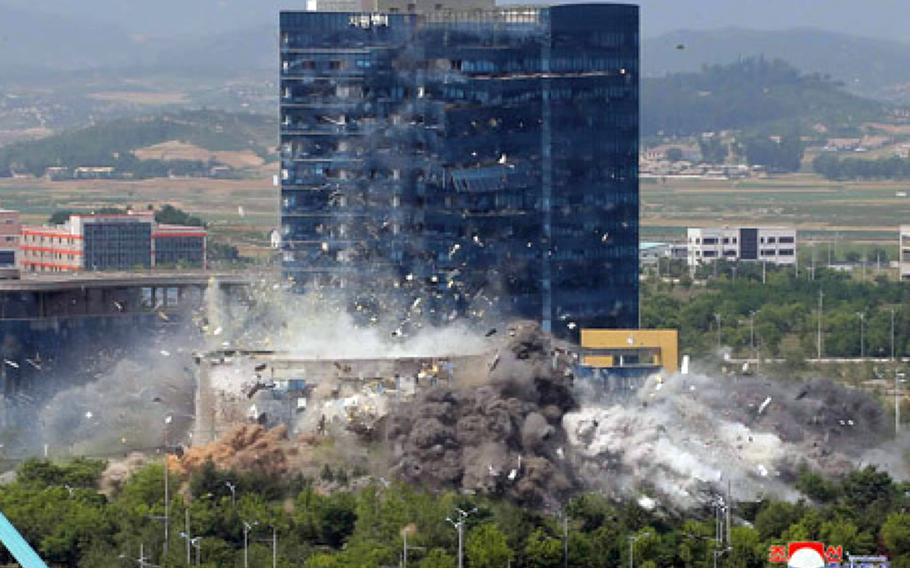 SEOUL, South Korea — North Korea’s demolition of a liaison office and threats to redeploy troops to front-line areas signaled a move to unravel a 2018 military pact that had been a high point in efforts to improve relations with the South.

While the principal target of the North’s ire was South Korean President Moon Jae-in, experts said it also sent a message to the United States that the regime is prepared to raise the ante with more provocations amid frustration over the lack of progress in nuclear talks.

The explosion that destroyed the inter-Korean liaison office in the North Korean village of Kaesong on Tuesday was largely symbolic since the South Korean staff had pulled out in January due to coronavirus concerns. But it was a major blow to Moon as the facility had been a centerpiece of his hopes for peace.

The North ratcheted up tensions on Wednesday, warning that it was developing a plan to send regiments and “necessary firepower sub-units” to the tourist area at Mount Kumgang and the Kaesong industrial zone, areas that had been demilitarized as part of the 2018 agreement, according to the Korean Central News Agency.

“Civil police posts that had been withdrawn from the Demilitarized Zone under the north-south agreement in the military field will be set up again to strengthen the guard over the front line,” KCNA said, quoting a spokesman for the army’s general staff.

He also threatened to “resume all kinds of regular exercises” near the Demilitarized Zone that divides the peninsula, as well as naval boundaries.

Pyongyang also revealed that Moon’s administration had asked on Monday to send special envoys to discuss the current crisis, but said that Kim Yo Jong, the powerful sister of leader Kim Jong Un, had rejected “the tactless and sinister proposal.”

That prompted an unusually angry response from South Korea, which called the criticism of Moon “a senseless act” and “very rude.”

“We won’t tolerate North Korea’s indiscreet rhetoric and actions,” presidential spokesman Yoon Do-han told reporters on Wednesday, warning that the North will be held responsible for the consequences.

Yoon also expressed “strong regret” that the North had unilaterally disclosed the South’s offer to dispatch a special envoy in a bid to restore calm.

The dramatic escalation in tensions followed months of North Korean saber rattling that has raised fears of a return to the type of hostilities that pushed the divided peninsula to the brink of conflict before diplomatic efforts gained momentum in 2018.

The North has stopped short of actions that would likely provoke a response from President Donald Trump, who is preoccupied with his re-election campaign and civil unrest over racial injustice.

Instead the Kim regime appeared to be reverting to its playbook of raising pressure on the South in a bid to wring more concessions including the lifting of U.S.-led sanctions that have stymied inter-Korean economic initiatives, experts said.

It also may be testing the longtime alliance between Seoul and Washington, which has been hit by a defense cost-sharing dispute.

“The Kim regime takes these extreme measures in order to increase tensions on the peninsula and raise the stakes for future negotiations,” said Jessica Lee, senior research fellow on East Asia for the Washington, D.C.-based Quincy Institute. “But it is also a very dangerous and reckless gamble that can easily backfire.

“The longer the deadlock persists, the more likely the volatile situation on the Korean Peninsula is to spiral out of control,” she said in an emailed commentary. “Inter-Korean relations will not improve unless tools of financial warfare such as economic sanctions are deployed strategically.”

South Korea has been caught in the middle as talks between Pyongyang and Washington deadlocked last year in disagreement over the extent of sanctions relief in exchange for steps toward disarmament.

Trump, who went from calling Kim “rocket man” to saying the two leaders had “fallen in love,” has insisted that he prevented another war by becoming the first-ever American president to meet with a North Korean leader during their 2018 summit in Singapore.

But relations between the two leaders have soured as the North expressed increasing frustration with the U.S. refusal to offer rewards and resumed short-range missile tests last year after a yearlong hiatus.

“The destruction of the liaison office reveals North Korea’s frustration with the status quo and the lack of sanctions relief,” Frank Aum, a specialist on North Korea at the U.S. Institute of Peace, said in an email. “To disrupt the status quo, North Korea will continue to use lower-level provocations and inflammatory remarks to increase pressure on Washington and Seoul in the areas that hurt the most.”

“Since Washington and Seoul are unlikely to significantly amend their approaches to North Korea, they should focus on the things they can control, such as increasing financial costs on the regime, maintaining military deterrence and readiness,” he added.

Aum also said the United States should resolve the cost-sharing dispute with the South and improve relations with Japan and China to gain their support in the standoff.