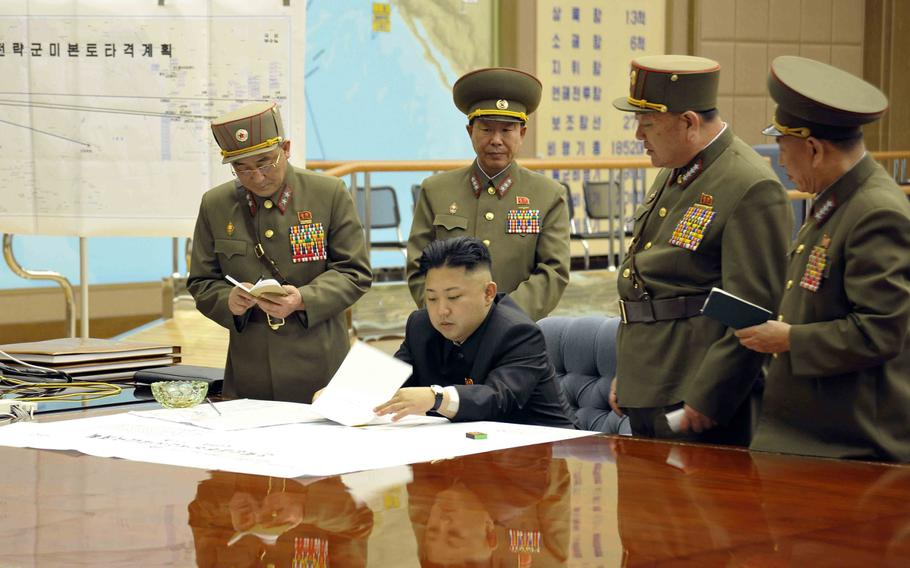 North Korean leader Kim Jong Un reportedly was a no-show Friday at one of the country’s biggest annual events, further fueling speculation that he is seriously ill or no longer in power.

Kim, who took over the reins of the reclusive communist country nearly three years ago following the death of his father, Kim Jong Il, was last seen in public Sept. 3. This is the longest period that he has been out of the public eye, and includes his absence from a national parliament meeting Sept. 25 that he usually attends.

There is a wide range of theories on what’s going on: Kim is sick or dead, has been ousted in a coup, or that his younger sister is running the show. Some analysts have suggested that the regime of the poverty-wracked country, hit by so many international sanctions and crop failures, could be facing collapse.

The situation raises questions not only about the pudgy Kim personally, but about who is running a country that is considered one of the world’s most dangerous because of its nuclear weapons and missile programs – and its repeated threats to use them. There have been reports that the capital, Pyongyang, has been closed off in recent weeks.

For the first time in three years, Kim wasn’t on a list of dignitaries at a celebration Friday of the anniversary of the founding of the ruling Workers’ Party. An official state media dispatch listed senior government, military and party officials who paid their respects at an event marking the party’s 69th anniversary, but not Kim. It said a flower basket with Kim’s name on it was placed before statues of his father and grandfather, both of whom also ruled North Korea.

A South Korean Ministry of National Defense spokesman said Friday that he could not comment because of intelligence concerns about Kim’s health or the stability of his regime. Unification Ministry spokesman Lim Byeong-cheol said Kim seems to be maintaining authority as normal, and the ministry has no information about any specific health problems, according to a transcript of a press briefing.

Some 28,500 American troops are stationed in South Korea as a deterrent to invasion by the North, which has most of its approximately 1 million troops stationed within 90 miles of the Demilitarized Zone that has separated the two Koreas since the end of the Korean War.

Oct. 10 is a major holiday in North Korea and usually features a major military parade and other activities.

Last year, Kim visited the mausoleum that holds the bodies of his father and grandfather, Kim Il Sung, who began the only communist dynasty, just after midnight. He later attended a band and chorus concert and sports events, according to the North’s mouthpiece, the Korean Central News Agency.

Kim, who is believed to be in his early 30s and has gained substantial weight since taking over, was limping when seen in July, and a recent North Korean documentary reported that he has been feeling “discomfort.” The country has built a personality cult around all three Kims, portraying them as nearly godlike, even rewriting the tale of Kim Jong Il’s birth along the lines of the biblical story of Jesus.

With so little reliable information seeping out, trying to figure out what’s going on in North Korea is akin to reading tea leaves. The country seems to employ a strategy of keeping the world guessing.

Last year was one of the most tense on the Korean Peninsula since the war ended, with the North conducting its third and most powerful underground nuclear test following the successful launch of a three-stage rocket that it claims could reach the U.S. mainland.

But things generally cooled off into a period of relative calm and what some South Korean media have even described as a North Korean diplomatic offensive that included sending a delegation of North Korean officials — as well as a contingent of athletes — to the closing ceremonies of the Asian Games last Saturday.

When the officials flew in on Kim’s private plane, they became the highest-level delegation to visit the South since 2009, according to Victor Cha and Andy Lim of the Center for Strategic and International Studies in Washington.

They met with the South’s minister of unification and national security adviser and agreed to set up an inter-Korean meeting in late October or early November. Those talks could lead to agreements on more reunions between families separated since the Korean War, Cha and Lim said in a statement Monday.

“One expects at least a temporary thaw between now and the next set of talks, but there is no guarantee that this will be long-lasting,” they said.

Then on Tuesday, the two Koreas exchanged fire near their disputed maritime demarcation line, though it was unclear if a North Korean naval ship crossed the line intentionally or by accident.

Hours later, South Korea’s Ministry of National Defense released a report to the National Assembly saying the North had announced its goal of achieving reunification between the two Koreas in 2015 — though it apparently didn’t specify how — and that the North was preparing for full-scale war.

“For that goal, the North doubled the number (of troops) involved in its summer trainings compared to previous years. It has also boosted its attack capabilities in a consistent manner,” Yonhap News quoted the ministry as saying.

Pyongyang also has increased its number of rocket launchers by 300 over the past two years to a total of about 5,100, Yonhap said.