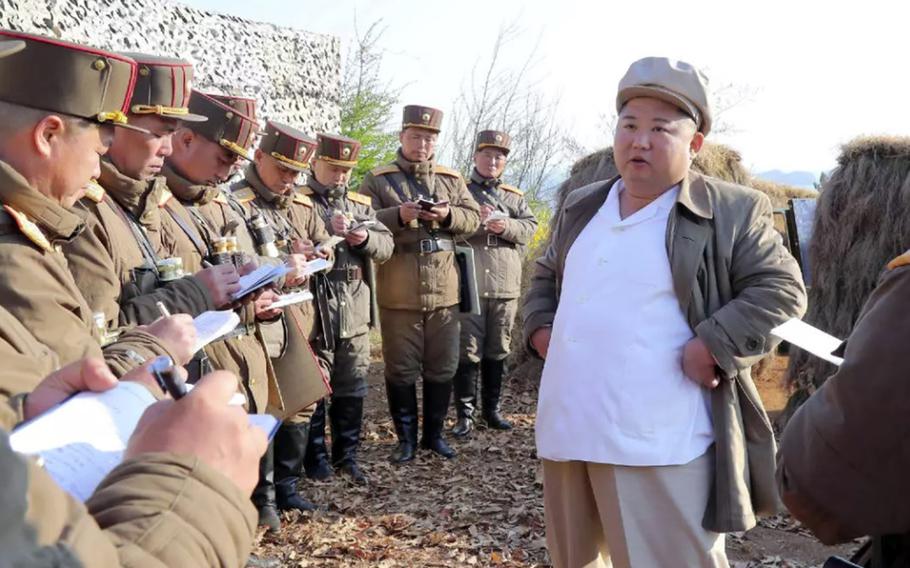 SEOUL, South Korea — North Korean leader Kim Jong Un suspended plans for military retaliation against the South, state-run media reported Wednesday, in a de-escalation of political tensions on the eve of the 70th anniversary of the outbreak of the Korean War.

The surprise reversal by North Korea followed weeks of bellicose rhetoric by Kim’s powerful sister, Kim Yo Jong. The saber-rattling was capped by a June 16 blast that devastated an inter-Korean liaison office on the North’s side of the border to protest South Korean activists’ efforts to float anti-regime propaganda into the communist state.

North Korea also removed loudspeakers used for blaring propaganda against the South, which the communist state had recently reinstalled along the Demilitarized Zone, the buffer zone that divides the peninsula, according to officials in Seoul.

Kim Jong Un presided over a preliminary meeting of the military commission of the ruling Workers’ Party on Tuesday, according to the Korean Central News Agency.

The commission “took stock of the prevailing situation and suspended the military action plans against the South” that had been proposed by the general staff of the North Korean army, KCNA said in a brief report.

It also said the commission, which met via video conference, examined major policy decisions and documents “for further bolstering the war deterrent of the country” ahead of the fifth meeting of the party’s seventh central military commission.

Seoul has said it would respond strongly to any further provocations.

“Regardless of the North Korean moves, we will continue to maintain a firm readiness posture,” Jeong Kyeong-doo told a parliamentary judiciary committee. He also confirmed reports that North Korea had removed the propaganda loudspeakers.

South Korea’s Yonhap News Agency later reported that some North Korean propaganda outlets also had removed more than a dozen online stories that had denounced the South over the leafleting issue.

The spat was a stark reminder of the fragility of relations between the two Koreas 70 years after the war began with a North Korean invasion on June 25, 1950. The three-year conflict ended in an armistice instead of a peace treaty, leaving the sides technically at war.

It was unclear why the North suddenly reversed its stance and issued the first public reference to Kim Jong Un in weeks. The 36-year-old leader’s prolonged absences between sporadic appearances have prompted continued speculation about possible health problems, although U.S. and South Korean officials have dismissed major concerns.

Experts also suggested that Pyongyang may feel it had accomplished its goal of raising pressure on the South and wanted to avoid provoking a stronger reaction that could involve the United States.

“It is trying to test the water and watch Seoul’s response while slowing down the tempo since Kim Yo Jong issued her statement,” said Lee Ho Ryung, a research fellow at the Korea Institute for Defense Analyses.

She also said it would be hard for North Korea to follow through with its threat to distribute anti-Moon leaflets in the South because the rainy season has begun, making it difficult to get them across the border.

Good cop, bad cop?Nathan Hunt, a specialist on North Korea who contributes to Jane’s Intelligence Review, said it could also be an effort to boost the hardline credentials of Kim Yo Jong by showing the leader’s younger sister and potential successor as a supporter of the military who only pulled back when ordered.

“This might be the brother and sister playing good cop, bad cop, so as to help raise her standing among the military,” Hunt said.

Kim Yo Jong, who has emerged as the North’s main point person on inter-Korean relations, accused the South Korean government of conniving with the anti-North activists to send the leaflets across the border in violation of past agreements.

She warned earlier this month that the liaison office would be demolished and said she would leave it up to the North Korean army “to decisively carry out the next action.”

The army’s general staff then threatened to redeploy troops to frontline areas in what would be a reversal of a 2018 military agreement with the South, and to support North Korean efforts to scatter propaganda leaflets criticizing South Korean President Moon Jae-in’s administration. State media showed photos of people producing anti-Moon leaflets.

Door to diplomacyThe spat has raised fears of a new crisis that could pose another setback to stalled U.S.-led efforts to persuade the North to abandon its nuclear weapons.

Pyongyang has conducted several short-range missile and artillery tests in recent months as it expressed increasing frustration over the lack of diplomatic progress.

Marc Knapper, deputy assistant secretary of state for Korea and Japan, said Wednesday that “the door to diplomacy remains open.”

“We remain ready to engage in dialogue with the North, and we remain committed to a diplomatic solution to address the nuclear and missile issues,” he said during an online forum hosted by the New York-based Asia Society. “We have to work hand in hand with the South Koreans to do this.”

He also said he wouldn’t rule out the possibility that diplomacy could resume before the November presidential election, pointing out that it had happened during Bill Clinton’s presidency.

“History has shown the North Koreans seem quite capable of engaging in an election year,” he said, declining to go beyond that. “I’ve been proven wrong before when it comes to making predictions about what’s going to happen.”