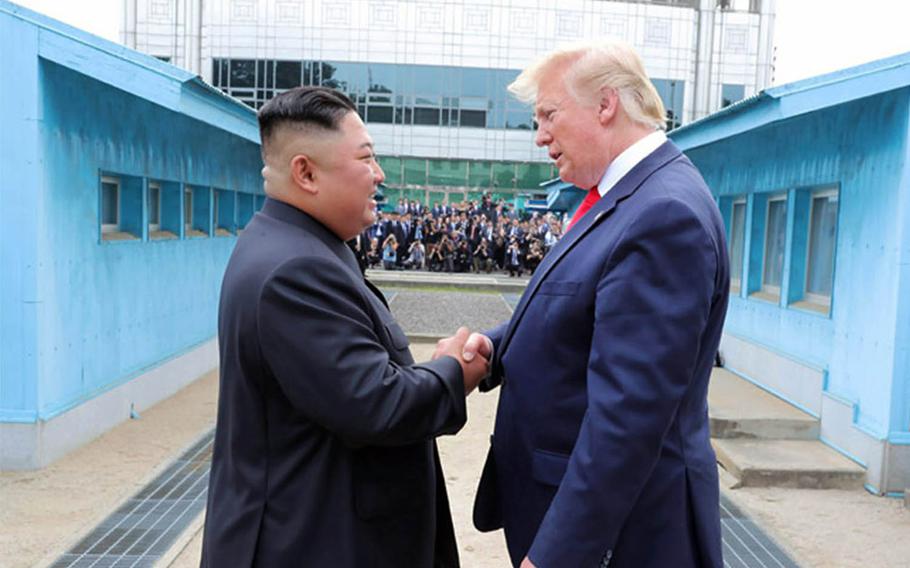 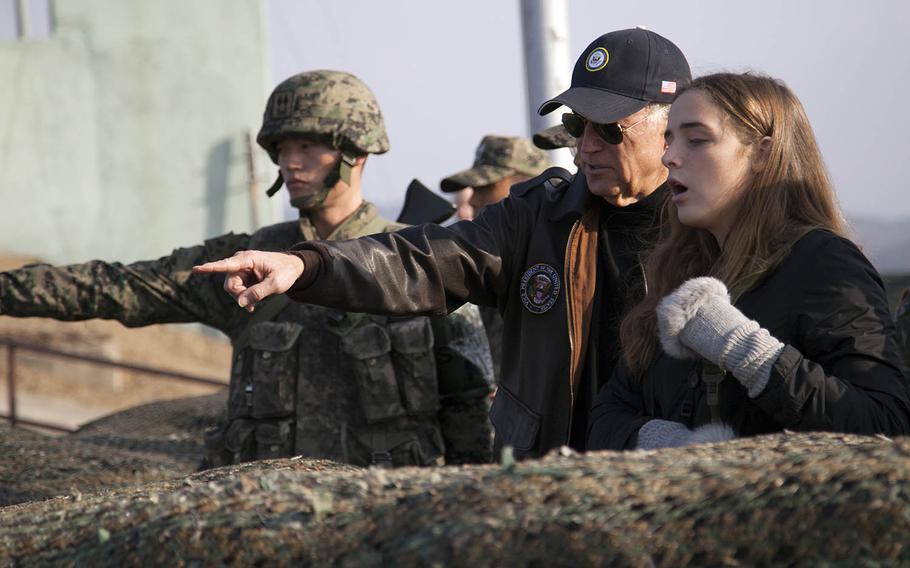 Then-Vice President Joe Biden points out an area of North Korea to his granddaughter, Finnegan Biden, during a visit to the Demilitarized Zone on Dec.7, 2013. (Chris Church/U.S. Navy) 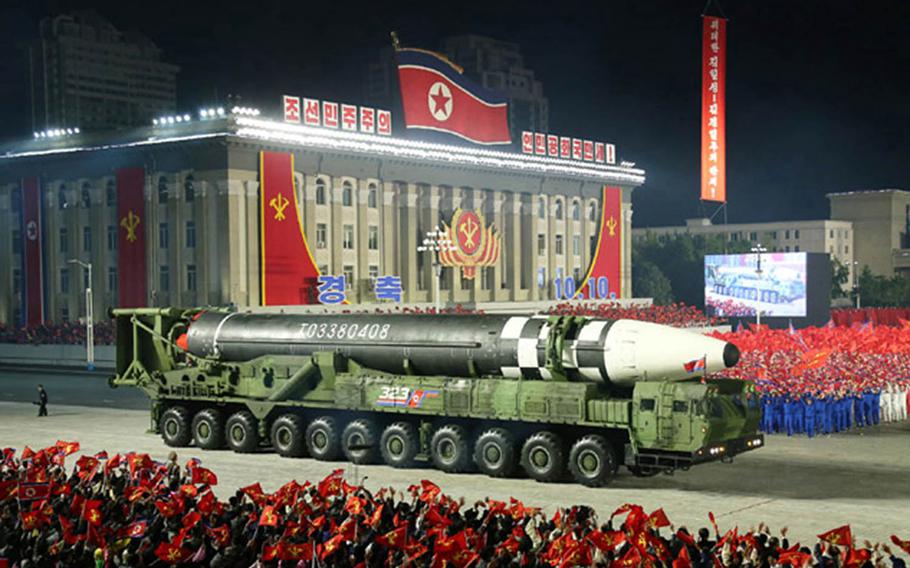 North Korea shows off what appears to be its largest intercontinental ballistic missile during a military parade on Oct. 10, 2020. (KCNA)

SEOUL, South Korea — With the U.S. election less than two weeks away, it appears clear that North Korea’s leader would like to continue his bromance with President Donald Trump.

Kim Jong Un has heaped praise on Trump in more than two dozen letters even as nuclear talks between the two countries faltered. Meanwhile, the North has called Democratic rival Joe Biden a “rabid dog” who is “greedy for power.”

No matter who wins, the new U.S. administration will face a growing nuclear threat from the North, which recently rolled out a huge new intercontinental ballistic missile that may be able to target the United States.

Testing a new administration The North’s next step will likely be to test-fire a long-range missile, but probably not until after the results are in from the Nov. 3 vote, experts said.

“The North Koreans are perhaps more inclined to teach a lesson and to housebreak a new Biden administration than they are to throw a monkey wrench into what’s already a kind of wild and crazy U.S. election,” Daniel Russel, former assistant secretary of state for the region, said during a virtual panel earlier this month.

Despite the weapons advances, Trump has consistently touted North Korea as a foreign policy success, saying in 2018 that he and Kim “fell in love” after months of high-profile summits and diplomatic efforts tamped down hostilities that pushed the divided peninsula to the brink of a new war in 2017.

The North agreed to “work toward the complete denuclearization of the Korean Peninsula” during Kim’s first summit with Trump in June 2018 in Singapore. But the two sides subsequently failed to agree on how to accomplish that, with Kim demanding extensive sanctions relief in exchange for incremental disarmament steps.

Amid the stalemate, North Korea has advanced its missiles and delivery systems while stopping short of a long-range missile test that Trump has signaled would be a red line.

A Trump win would likely mean a return to the fitful diplomatic efforts that characterized his first term, according to David Maxwell, a senior fellow at the Foundation for Defense of Democracies, a Washington, D.C., think tank.

“My concern is that he could make a deal that would be counter to all the advice of his national security team that would involve some kind of trade of US troops for a reduction in the North’s ICBM and nuclear capabilities,” he added.

A new approach Biden, meanwhile, accused Trump of making the United States less secure by embracing “all the thugs of the world,” including Kim and Russian President Vladimir Putin, during a televised town hall last week.

“You have Iran closer to having enough nuclear material to build a bomb. North Korea has more bombs and missiles available to it,” he said.

The former vice president is widely expected to seek a return to a reliance on allies and working-level talks if he wins, saying that he wouldn’t meet with Kim until diplomats from both sides hammer out a draft agreement.

But most experts agreed a return to President Barack Obama’s policy of “strategic patience,” which relied on pressuring the North and its ally China with sanctions, is not in the cards.

“Strategic patience didn’t work so Biden can’t totally go back, but his new policy won’t be that much different,” Park Won-gon, a professor of international politics at Handong Global University, said in a recent telephone interview.

Obama began his presidency declaring American would “extend a hand” to old adversaries, including North Korea, willing to “unclench” their fists.

North Korea responded within months by firing a long-range missile and conducting its second nuclear test in 2009.

The communist state ramped up tests in Trump’s first year in office, culminating with a suspected hydrogen bomb and an ICBM fired toward the waters off Japan in 2017 while the U.S. and North Korean leaders traded threats and personal insults.

Many pundits have called for a new approach to North Korea policy, including possible acceptance of the communist state as a de facto nuclear power.

Michelle Flournoy, a former defense adviser under Obama who reportedly may be a candidate for defense secretary in a Biden administration, echoed that idea in a Sept. 30 video interview with Defense News.

“This is a really hard problem that many, many administrations of all different political stripes have tried to deal with,” she said, calling for a layered approach including defenses, deterrent measures and engagement to discourage bad behavior.

“But it’s, I think, from a disarmament perspective hard to see this leader and this regime completely accepting nuclear disarmament because it is their survival card,” she added. “So, I think it’s more of a risk management in my view, realistically, even though we should keep disarmament out there as the ultimate long-term goal.”

The standoff hasn’t featured much on a campaign trail that has been overshadowed by the coronavirus pandemic, racial tensions and other domestic woes.

But North Korea has a pattern of conducting provocations to force itself onto the U.S. agenda.

Embracing diplomacy “North Korea knows very well that if there’s anything that can make the United States come to the negotiation table that’s nuclear weapons and ICBMs,” Haksoon Paik, the president of South Korea’s Sejong Institute, said during a virtual meeting this week with the Council on Foreign Relations.

“The next U.S. administration has to resume negotiations with North Korea, like it or not, to protect its security interests,” he added, advising whoever wins not to waste too much time on policy reviews.

He warned both candidates not to waste too much time on policy reviews.

“President Donald Trump deserves credit for doing what no sitting American president has done before — meet with the North Korean leader,” she said in an email. “If Biden were elected president, he should take full advantage of the diplomatic opening by declaring the Korean War over and moving toward establishing a peace regime that addresses the use of nuclear weapons on the Korean Peninsula.”