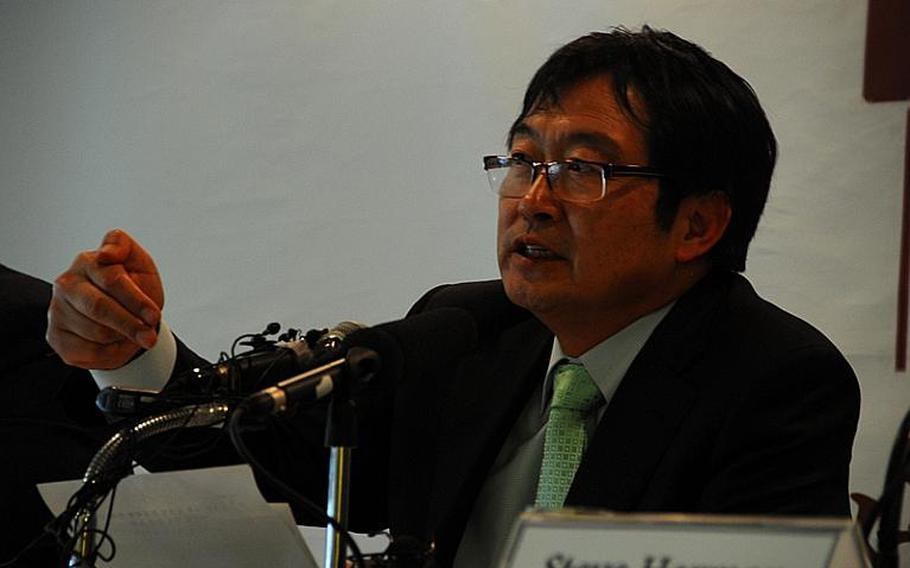 Buy Photo
Baek Seung Ju, director of the Center for Security and Strategy for the Korea Institute for Defense Analyses, speaks to reporters on April 9, 2012, about North Korea's upcoming rocket launch. (Ashley Rowland/Stars and Stripes)

SEOUL &mdash; It is highly likely that North Korea is preparing for an underground nuclear test in another apparent snub of the international community, a South Korean defense spokesman said.

Satellite photos indicate the North appears to be preparing for a nuclear test, a Ministry of National Defense spokesman said Monday in a telephone interview, even though the communist nation has not announced plans to conduct one. The official, who spoke on the customary condition on anonymity, said images show a mound of dirt beside a tunnel &mdash; an indicator that the North may be digging a new tunnel that would play a role in the test.

The Associated Press reported Monday that an intelligence report said excavation at North Korea&rsquo;s northeast Punggye-ri site, where nuclear tests were conducted in 2006 and 2009, is in its final stages. Dirt believed to have been brought from other areas is piled at the tunnel entrance. The dirt is needed to fill underground tunnels before a nuclear test, according to the AP.

Fears of a nuclear test come just days before it is believed the North will launch a satellite from a site near the Chinese border.

North Korean officials have said the launch &mdash; scheduled to take place sometime this week or early next week &mdash; will be used for peaceful purposes. But the U.S. and other nations believe the launch will be used to test long-range missile technology.

Baek Seung Ju, director of the Center for Security and Strategy at the Korea Institute for Defense Analyses, told reporters during a briefing Monday in Seoul that the North likely believes it can use the threat of a nuclear test as leverage to secure food aid from the United States. Impoverished North Korea agreed in late February to freeze its nuclear and missile testing in exchange for food aid, but announced the satellite launch just weeks later, prompting the U.S. to rescind the aid offer.

Because North Korea claims it is not launching a missile, &ldquo;it will put the U.S. in a dilemma,&rdquo; forcing it to choose between providing food or enduring another nuclear test, Baek said through a translator.

Baek said North Korea has a &ldquo;nuclear obsession&rdquo; and will eventually conduct another nuclear test so it will be considered a nuclear power by the international community.

White House spokesman Jay Carney on Monday called the rocket launch &ldquo;a very provocative act that would be, if it were conducted, done in direct violation of North Korea&rsquo;s international obligations.&rdquo;

A rocket launch would make it &ldquo;virtually impossible&rdquo; for the U.S. to provide food aid, he said.

&ldquo;That fact alone reinforces the kind of regime that we're dealing with when we talk about North Korea -- because the decision that they make to go through with this provocative act directly results in more deprivation for their people -- a people who are literally starving and suffer greatly because of the actions of the regime in Pyongyang,&rdquo; Carney said.

In a rare move, reclusive North Korea allowed a small group of foreign reporters and scientists to tour the Tongchang-ri launch site, located near the Chinese border, on Sunday.

Reporters from several news agencies, including The Associated Press, said the three-stage rocket was on the launch platform, indicating that preparations for the launch were nearing completion. South Korea&rsquo;s Yonhap News reported Monday that the North was expected to begin fueling the rocket soon, the final step toward launch.

&ldquo;North Korea has only fueling remaining after completing the installation of three stages of boosters on a launch pad,&rdquo; a South Korean official told Yonhap on condition of anonymity. &ldquo;Fueling is expected to begin soon, considering it usually takes two to three days.&rdquo;

The rocket launch will coincide with the 100th anniversary of the birth of North Korea&rsquo;s founder, Kim Il Sung, who died in 1994 but is still revered in the North. His grandson, Kim Jong Un, assumed power in December following the death of his father, Kim Jong Il.

The launch is widely seen by experts as a measure to shore up support within the North for the new leader.

U.S. military officials have said little about how the rocket launch might impact operations, though U.S. Forces Korea and U.S. Forces Japan both said they were &ldquo;monitoring the situation very closely&rdquo; and were coordinating closely with their host countries.

South Korea and Japan have warned they are prepared to shoot down any North Korean rocket that strays into their airspace.