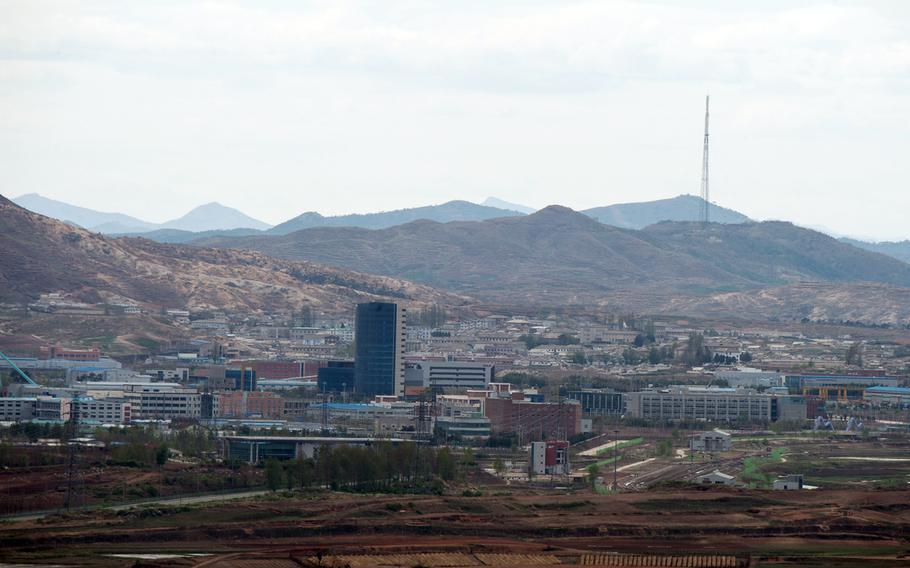 SEOUL, South Korea — North Korea blew up a joint liaison office near the border with South Korea on Tuesday in one of the most provocative acts by the communist state since nuclear talks with the United States collapsed last year.

Seoul warned it would “strongly respond” to further provocations, marking a sharp escalation of tensions triggered by the dispatch of anti-regime leaflets by activists.

In an unusually fast report on state-run media, North Korea confirmed that it had demolished the liaison office with a “terrific explosion” to punish the South for the propaganda leaflets that were floated across the border earlier this month.

Smoke rose from the area, which is on the North Korean side of the Demilitarized Zone, as seen in photos by South Korea’s Yonhap News Agency.

Symbolic but dangerousNo South Koreans had been in the facility because the office closed in late January due to coronavirus concerns, according to the Unification Ministry in Seoul.

The government convened a national security council meeting and warned it will “strongly respond if North Korea takes any action that worsens the situation.”

“The destruction of the joint liaison office is a betrayal of everybody who hoped for the development of inter-Korean relations and the establishment of peace on the Korean Peninsula,” the NSC’s deputy director Kim You-geun told reporters.

The liaison office, established in Kaesong after a series of inter-Korean summits in 2018, was a centerpiece of South Korean President Moon Jae-in’s efforts to improve relations with the North.

The two sides agreed to send senior officials to the facility for weekly meetings, but the North stopped participating last year as relations chilled. Still, they maintained regular contacts until deciding to close the office because of the pandemic.

“This is a highly symbolic and threatening message to South Korea designed to unnerve Seoul and coerce the Moon administration into defending North Korean interests,” Jean Lee, a Korea expert at the Washington, D.C.-based Wilson Center said.

“Pyongyang is always seeking to drive a wedge between South Korea and the United States, particularly on international sanctions, which are taking a toll on the North Korean economy,” she added.

The Korean Central News Agency reported that the office had been “tragically ruined” on Tuesday, days after the North had severed communication lines with the South.

It said the move was “corresponding to the mindset of the enraged people to surely force human scum and those, who have sheltered the scum, to pay dearly for their crimes.”

The North Koreans frequently use the term “human scum” for defectors who fled to the South and often participate in operations to send messages and food across the border.

North Korea already has suspended most cooperation with Seoul amid frustration over the lack of progress in bilateral economic projects and other issues linked to disarmament talks with the United States.

But the dispatch of propaganda leaflets by a group of activists earlier this month proved a tipping point for Pyongyang, which treats the ruler and his family as godlike.

South Korea’s government promised to prevent further leafleting, but the North accused it of conniving with the activists and violating agreements.

More threatsEarlier Tuesday, the North Korean army said it was “keeping a close watch on the current situation in which the north-south relations are turning worse and worse” and “will rapidly and thoroughly implement any decisions and orders” of the ruling Workers’ Party and government.

The army’s general staff is “studying an action plan” to reoccupy areas that had been demilitarized under past deals and to “turn the front line into a fortress and further heighten the military vigilance against the south,” KCNA reported.

South Korean media speculated the North may be referring to regions where it has pulled out troops to facilitate past economic and tourism projects around the border town of Kaesong and the Mount Kumgang resort area.

The two Koreas also vacated several guard posts in the Demilitarized Zone that divides the peninsula as part of a military agreement reached in 2018 during a bout of diplomatic efforts to improve relations that have since fizzled.

But Pyongyang has largely focused its ire on South Korea and stopped short of test-firing an intercontinental ballistic missile or staging another action that could provoke President Donald Trump.

Experts said the North is likely using a favored tactic of creating a crisis to project strength on the domestic front and pressure the South to take its side on sanctions and other issues.

Speaking about Kim Yo Jong’s threat on Monday, a former senior South Korean negotiator said the destruction of the liaison office would be mainly symbolic.

“Blowing up the liaison office is just killing what is dead already,” Chun Yung-woo said in an online forum about past efforts to persuade the North to abandon its nuclear weapons. “I think the North Koreans are trying to change [South Korea’s] policy toward North Korea through intimidation.”