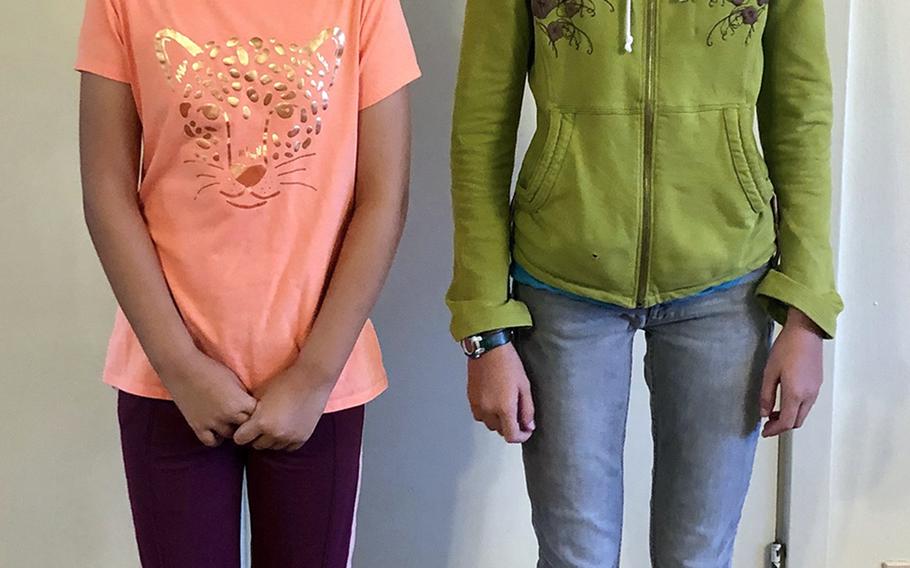 This photo taken Sept. 5, 2019, shows the daughters of Ryukyu Middle School parent Michelle Christensen, who said the child on the left was admonished by school officials for wearing pants without a zipper. (Michelle Christensen)

CAMP FOSTER, Okinawa — A dress code imposed at a Defense Department middle school on Okinawa in August discriminates against female students, according to a complaint filed by parents with the Department of Education.

The complaint — filed Jan. 10 with the department’s Office of Civil Rights — alleges gender discrimination at Ryukyu Middle School, a Department of Defense Education Activity school at Kadena Air Base.

It seeks to remedy what six parents say is an outdated dress code, according to the complaint and the parents’ attorney, Crista Kraics.

The complaint alleges that Principal Lee Ann Mik discriminated against female students by singling them out for their attire and removing them from class. The parents deemed their children’s attire “appropriate.”

The complaint says the students were put before a variety of administrators and teachers who judged their clothing, were subjected to comments from Mik and others and were sometimes forced to change into oversized lost-and-found items, all without parental notification.

Kraics said the actions cultivated an atmosphere of fear in which female students were afraid to go to school because they were worried about being singled out.

The complaint also said that in 2018 then-vice principal Mik held a meeting with female students at which she said if “the female children did not want boys to sexually harass them, then they should not dress like they did, or words to that effect.”

Mik did not respond to a Jan. 21 email from Stars and Stripes requesting comment.

DODEA officials said they investigated the initial complaint in September and substantiated nearly all the parents’ allegations, according to a copy of their investigative report. They then established an interim gender-neutral dress code policy while a working group studies reform.

“I think [Pacific South Superintendent Jim Journey and] the regional director [Lois Rapp] were clear in their responses to [Kraics] that we take this seriously and that we’ll address infractions,” DODEA spokesman Frank O’Gara told Stars and Stripes by phone Jan. 16. “Now, we’re not going to communicate those publicly, but what we have communicated publicly is that we’re going to change that policy.”

The issue began with the start of the new school year on Aug. 26, Kraics said. Parents and teachers almost immediately expressed concerns to administrators, but the policy was kept intact, according to internal school emails obtained by Kraics and shared with Stars and Stripes.

On Sept. 27, Kraics sent a complaint to Rapp, the Pacific director for student excellence. Rapp forwarded it to Journey who put the interim policy in place but placed discretion over dress back in Mik’s hands, Kraics said.

The mother of two female Ryukyu Middle School students, Michelle Christensen, said her daughters no longer feel safe at school and she has noticed personality changes. She asked that her daughters not be named.

“It’s had a really negative impact on [my daughters],” Christensen said. “[One daughter] used to be a lot happier. I think we’re counting the hours until we leave Okinawa.”