No, Australian soldiers aren’t banned from using slang around US Marines 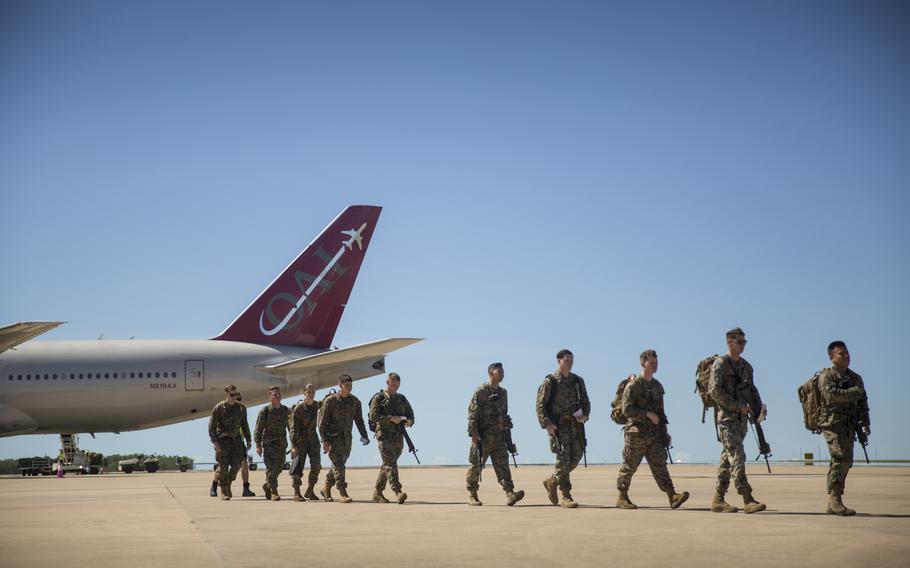 Reports of a ban on Australian slang may have had some Bruces and Sheilas whinging about watching their gobs around U.S. Marines this summer, but officials say the media accounts weren’t fair dinkum, mate.

Aussie troops will be allowed to speak English colloquially, although officials have cautioned that it could cause confusion among their American counterparts, hundreds of whom began arriving last month in the Northern Territory for the eighth and largest annual summer rotation since 2012.

The Marines and sailors, who by July are expected to number 2,500, are slated to take part in several exercises before heading home in October. It’s a chance to hone skills and strengthen ties, while working through possible differences in lingo.

“We have lost-in-translation moments more than you would realize,” Australian Air Force Group Capt. Stewart Dowrie told the country’s 10 Daily last week. “The time to figure that out is not on the battlefield when the bullets are flying.”

For example, the phrase “lucked out” can mean someone benefited from fortune to the Americans or exactly the opposite to the Australians.

But something about his comments got tangled when local media reported that the military had forbidden Australian Defense Forces members from using slang during training with the Americans.

“Soldiers have not been banned from using colloquialisms around United States Marines,” an ADF spokesman said via email Tuesday. “In the quote … Group Captain Dowrie uses the potential to misinterpret each nation’s everyday language as an example to highlight how training together improves understanding and interoperability.”

“It’s become part of the Australian identity,” she said. There is “a self-perception that we use slang more … We certainly kind of celebrate it.”

Some phrases can mean both one thing and its opposite. “Good oil,” for example, can refer to information that’s helpful and true, but in another context it can mean something that’s false.

Other terms that might confuse the Americans include “dag,” a reference to a socially awkward person, or “bludger,” a slacker who depends on others, she said. “She’ll be right” isn’t about girl power, it means everything will work out fine, so don’t “crack the sh-ts” or get angry.

The informal term “diggers,” for example, born during the World War I Gallipoli Campaign to refer to members of the Australian and New Zealand Army Corps, and has become “very entrenched” as part of the ANZAC mythology, she said. It’s now commonly used to refer to all Australian servicemembers.

Laugesen has researched the issue of cross-cultural communication, with special attention on the experiences of the country’s servicemembers during the world wars.

Sometimes, ANZAC members confounded other English-speaking troops with their language, she said. During WWI, a story was published about a pair of blokes speaking in long strings of aboriginal place names, claiming they were speaking a local tongue, just to mess with British troops.

Later, Aussies felt their culture and its unique expression threatened by the growing influence of Hollywood films, but a 1944 article about American soldiers in the country touts their adoption of local slang and their Australian counterparts’ rare adoption of Americanisms, she said.

“When it comes to slang, the Australians can give us a head start and still win,” a 1942 instruction booklet issued to U.S. soldiers stated. “Their everyday speech is just about the slangiest of all the brands of English.”

An estimated 1 million American servicemembers served on the continent during WWII, according to the 2006 preface to the booklet, titled “Instructions for American Servicemen in Australia,” which is available on the Australian Army’s website.

The preface cites an American servicemember who said the locals’ tendency to run their words together or shorten them also made for difficulty understanding them.

Laugesen cited some examples of this habit: afternoon has become “arvo,” service station has become “servo.” An ambulance driver is an “Ambo.”

A glossary in the original WWII-era booklet provides some other “colorful, picturesque” words and phrases — and hints at likely common interests among the troops of both countries, if not a common vocabulary.

Included among the first 20 words are the following selections, some of which appear to have fallen out of use: sheila – a babe; cliner – another babe; sninny – a third babe; shivoo – a party; shikkered – drunk; plonk – cheap wine; shout – to buy drinks for the house; smooge – to pitch woo (to flirt); cobber – pal.

Nowadays, of course, many websites offer lists of Aussie slang for the uninitiated. The Marines may want to brush up.

“The danger in the Australia-U.S. relationship is that we actually assume we mean the same thing,” Dowrie said last week.