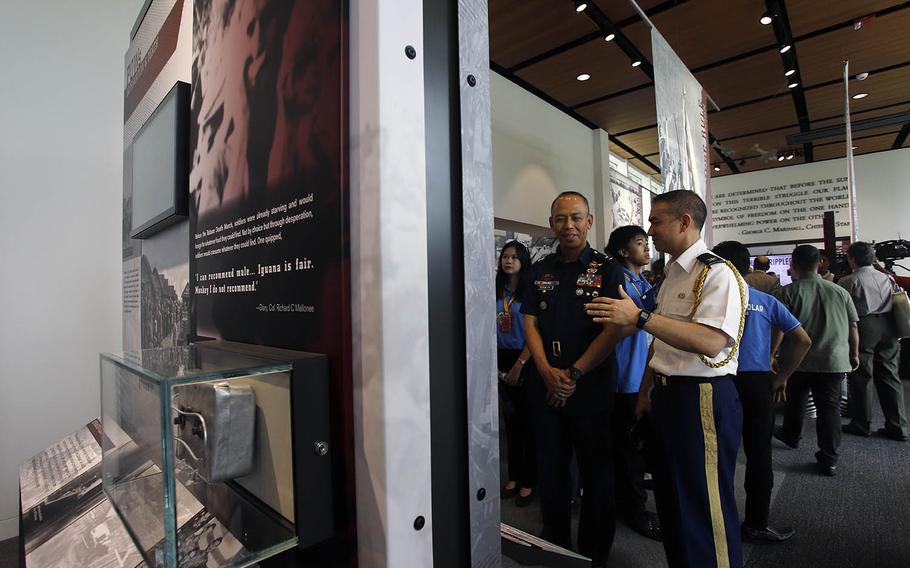 Guests check out a new visitor center that opened Sunday, Oct. 20, 2019, at the Manila American Cemetery, where more than 17,000 service members who lost their lives in World War II are interred. (American Battle Monuments Commission)

A new visitor center opened Sunday at the Manila American Cemetery, where more than 17,000 service members who lost their lives in World War II are interred.

“The Manila American Cemetery is the final and [hallowed] resting place for more than 17,000 interred service members and more than 36,000 who are honored on the Walls of the Missing,” the American Battle Monuments Commission said in a statement announcing the opening.

“The new Manila Visitor Center tells their story, and the compelling account [of] those who fought and sacrificed, both Americans and Filipinos, for the liberation of the Philippines and the Pacific,” the statement said.

Photographs provided by the commission show a modern building near service members’ graves. The building’s interior includes displays of artifacts and photographs.

It is the commission’s first visitor center in the Pacific, officials said.

The commission looks after the Cabanatuan American Memorial and Clark Veterans Cemetery in the Philippines. Other Pacific facilities overseen by the commission include the Saipan Memorial, the New Zealand Memorial, the Midway Monument, the Marker at Papua New Guinea, the Guadalcanal Monument in the Solomon Islands and the Korean War Monument at Busan, South Korea.

The Manila American Cemetery and Memorial occupies 152 acres and contains the largest number of graves of Americans who died serving their country in New Guinea and the Philippines during World War II, officials said.

The opening of the Manila visitors center marked the 75th anniversary of Gen. Douglas MacArthur’s return to the Philippines, officials said in their statement.

The Supreme Commander for the Allied Powers Southwest Pacific Area had left his headquarters on the island of Corregidor on March 11, 1942, following Japan’s invasion of Luzon.