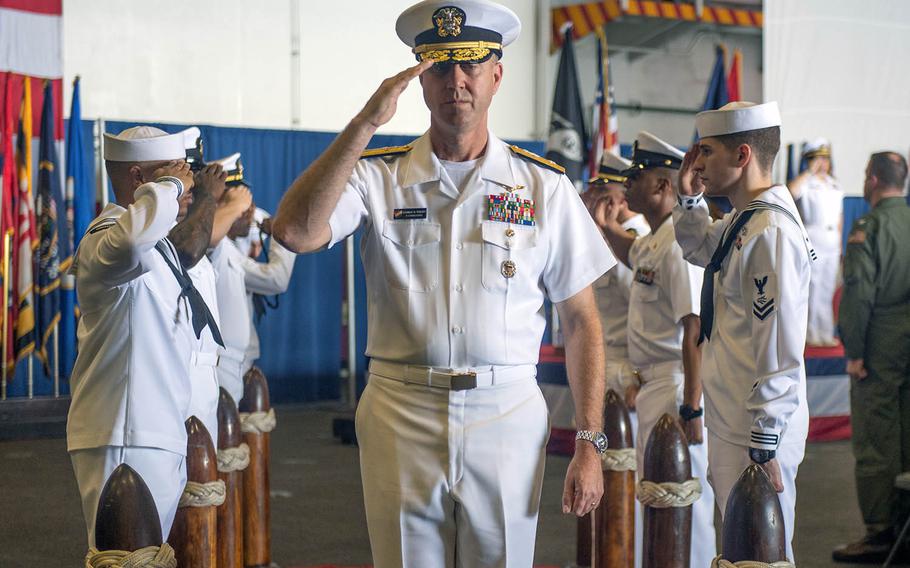 YOKOSUKA NAVAL BASE, Japan — Command of the Navy’s largest group of warships changed hands Sunday aboard the aircraft carrier USS Ronald Reagan in the South China Sea, according to the Navy.

Rear Adm. George M. Wikoff took charge of Task Force 70 from Rear Adm. Karl Thomas, who led the group, based in Yokosuka, through several tense operations and major multinational exercises in his 14 months at the helm.

Task Force 70 is the battle arm of 7th Fleet, the Navy’s largest numbered fleet. The 7th Fleet, based at Yokosuka, includes 70-80 ships, including the permanently deployed aircraft carrier USS Ronald Reagan, its air wing and carrier strike group; 140 aircraft and 40,000 sailors and Marines, according to the 7th Fleet website.

The task force commander also commands the Ronald Reagan strike group — or Carrier Strike Group 5 — and has operational control of any other carrier strike groups or independently deployed naval vessels operating in or passing through the 7th Fleet area of operations. In total, 7th Fleet is responsible for 48 million square miles of the Pacific and Indian Oceans.

Wikoff, a rear admiral and native of New Brunswick, N.J., is one grade lower than the fleet commander, Vice Admiral William R. Merz, who took his post Sept. 14.

Wikoff graduated from the Catholic University of America in 1990 with a Bachelor of Arts in financial management. He was commissioned through the George Washington University Naval ROTC program and earned a Master of Science in operational management from the University of Arkansas, according to his official biography. He is also a naval aviator with extensive command experience and service in Iraq and Afghanistan.

The task force under Thomas’ leadership participated in multinational exercises including Malabar, Keen Sword, Valiant Shield and Talisman Sabre, according to the Navy.

Ships from the task force have steamed through the Taiwan Strait six times and challenged Chinese claims to islands and reefs in the South and East China seas in freedom-of-navigation operations at least twice under Thomas’ tenure. Beijing routinely protests these moves.

The images shared by Twitter user @Duandang and published by the Japan Times show what looks like six ships sailing within the vicinity of the aircraft carrier. The Twitter post said the image was taken northeast of the Spratly Islands, a contested chain of islands over which China, Malaysia, Taiwan, the Philippines and Vietnam dispute sovereignty.

“The U.S. aircraft carrier group came to the South China Sea to flex muscles and escalate regional militarization. We are firmly opposed to that,” ministry spokesman Sr. Col. Ren Guoqiang said at a press conference Thursday, according to a transcript. “We urge the U.S. side to respect the security concerns of countries in the region and make positive contributions to the peace and stability in the South China Sea.”

Ren would not comment on whether the apparent battleships shown in the satellite images were Chinese but said, “The Chinese military will earnestly perform its duties and missions and firmly safeguard national sovereignty and security,” according to the transcript.

Comment from 7th Fleet officials was not available Monday.

China has been building and militarizing islands and reefs since the start of the decade. About a third of world trade passes through the South China Sea, which is rich in oil and fishing grounds, and the U.S. protests China’s internationally unrecognized claim to the waters.

The Ronald Reagan and its strike group regularly sail through the South China Sea. The carrier was passed through these waters in August en route to a port visit in Manila, the Philippines, before returning to Yokosuka for a brief break from deployment.

Thomas is leaving to become the assistant deputy chief of naval operations for operations, plans and strategy at the Pentagon. Wickoff comes to the task force from Washington, D.C., where he served as assistant director for global integration and current operations for J3, the operations department of the Joint Staff.

In the Navy press release, Wikoff said Thomas’ “leadership has strengthened the lethality of our forward-deployed naval forces, and I look forward to continuing the culture of excellence he inspired within the strike group.”