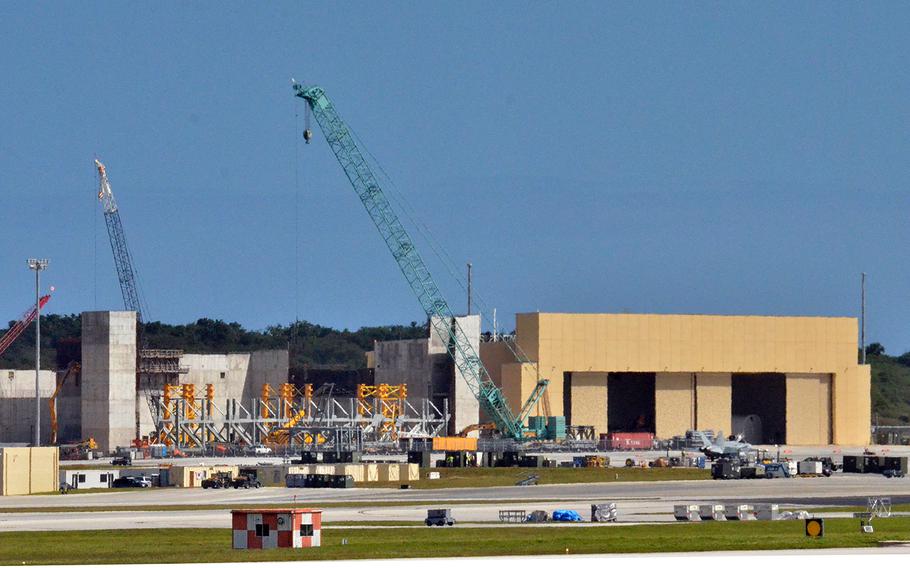 The north ramp at Andersen Air Force Base, Guam, is being turned into a facility equivalent to a Marine Corps air station. (Seth Robson/Stars and Stripes)

The north ramp at Andersen Air Force Base, Guam, is being turned into a facility equivalent to a Marine Corps air station. (Seth Robson/Stars and Stripes) 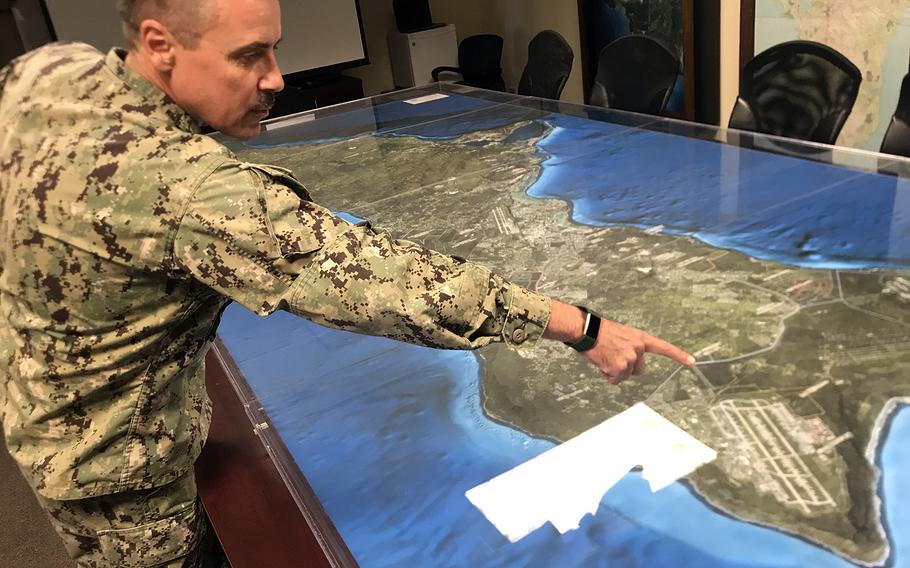 Navy Cmdr. Brian Foster, who is helping oversee construction for the Naval Facilities Engineering Command on Guam, points out some of the planned facilities on a tabletop map, Feb. 20, 2020. (Seth Robson/Stars and Stripes) New facilities for Marines, including shooting ranges, are under construction on Guam, Feb. 20, 2020. (Seth Robson/Stars and Stripes) Construction workers make progress on Camp Blaz, a new base expected to accommodate 5,000 Marines near the northern tip of Guam, in late February 2020. (Seth Robson/Stars and Stripes)

ANDERSEN AIR FORCE BASE, Guam — A new home for thousands of Marines is taking shape on land near Andersen Air Force Base that, until recently, was covered in a thick jungle full of snakes and littered with World War II-era bombs and bullets.

Dozens of workers swarmed over a construction site at Finegayan, near the northern tip of Guam late last month.

The facility they’re building, to be known as Marine Corps Base Camp Blaz, is named in honor of the late Marine Brig. Gen. Vicente “Ben” Tomas Garrido Blaz, a Guam native. The base is designed to accommodate 5,000 Marines under a plan to reduce America’s military footprint on the Japanese island of Okinawa over the next decade.

In 18 months, the workers have cleared snake-filled jungle that covered a small arsenal of unexploded munitions, including bombs as large as 500 pounds, grenades, rockets and bullets.

Heavy equipment is still moving earth across 400 acres that will become work and living areas for single Marines. But it’s possible to get an idea of what the base will look like with a road leading to its main gate and the shells of a few concrete buildings rising from the dirt.

The heart of Camp Blaz, where barracks will be built for unaccompanied Marines, is next door to Naval Computer and Telecommunications Station Guam, just west of Andersen. The top secret listening post includes an impressive array of white domes that look like giant golf balls.

During a recent tour of Camp Blaz, Navy Cmdr. Brian Foster, who is helping oversee the construction for the Naval Facilities Engineering Command, pointed out some of the planned facilities using a tabletop map.

The Navy last month awarded a contract to build two six-story barracks at the new base, he said, adding: “It’s more than the construction of Camp Blaz.”

The Marines will practice sharpshooting at several new ranges, including a “multipurpose” machine gun range being built along Guam’s northwestern coast. Troops will also train on the islands of Tinian and Farallon de Medinilla, Foster said.

An abandoned housing area, known as Andersen South, is being turned into an urban training compound.

“There are hundreds of vacant houses there. It’s already being used by the Marines for urban training,” he said.

The Navy plans to add taller buildings to allow Marines to train the way they’d fight in a major city, as well as a mock embassy, breach training facility and a convoy training course, Foster said.

Marine families will live on Andersen, where another 300 housing units will be built, he added.

The base will also host the Marines’ aviation element. Andersen’s North Ramp is being turned into a facility equivalent to a Marine Corps air station, Foster said.

One hangar has already been built and another is under construction. Workers have also completed a headquarters building and facilities for ground-support equipment and an armory, he said.

At Naval Base Guam, to the south, workers will build new embarkation and debarkation facilities for the Marines, including a headquarters, medical and dental facilities, equipment storage areas and a kennel for military working dogs involved in customs inspections, Foster said.

Only 1,300 Marines will be permanently stationed on Guam with another 3,700 coming to the island as a rotational force in the same way that a Marine Air Ground Task Force deploys to Australia’s Northern Territory to train each summer, he said.

The Japanese government is funding $3 billion worth of projects for the Marines’ relocation with the U.S. government spending another $5.7 billion, Foster said.

“What we will see in the months and years ahead is a steady increase in the number of these construction projects,” he said. “There will be about 50 in total, including projects that encompass multiple facilities.”

The arrival of the Marines will have a deep impact on the 32-mile-long island and its 170,000 inhabitants, Foster added.

“We are trying to limit impact on infrastructure,” he said.

That means improving roads, bridges and utilities such as water treatment, electricity and sewage systems to cater to the Marines.

“It’s a huge benefit to everybody who lives on the island,” he said.

“We have probably had that many service members here in the 1980s and during the Vietnam War,” he said. “It will be a real boost for our economy and put more money in people’s pockets.”

Improved infrastructure, such as widening an important road — Route 3A — from two lanes to four, is another benefit, Klitzkie said.

Not everyone agrees. Last year, more than 100 residents held a roadside protest south of the planned base to voice concerns about the construction’s impact on the environment and cultural sites, the Pacific Daily News reported July 11.

The Navy is trying to limit the impact of the projects on the island’s ecology. Workers are planting new forest on government land to replace trees cut down to make way for the new base and archaeologists are collecting any evidence of prehistoric habitation such as pottery shards discovered on construction sites for preservation, Foster said.

“We are doing construction at every one of these locations,” he said.

The work will pick up in 2023 and be heavy through the rest of the decade, he said.

So far only 1,500 foreign workers have visas, Turner said.

He showed the engineers a list of dozens of projects yet to be awarded, ranging from munitions storage facilities to barracks, parking lots, refueling facilities, ranges and wells.

The expansion means there are plenty of government jobs available on Guam, Turner said, noting that the engineering command has more than 100 vacancies in the islands and expects to advertise more than 100 more jobs as the construction work ramps up.