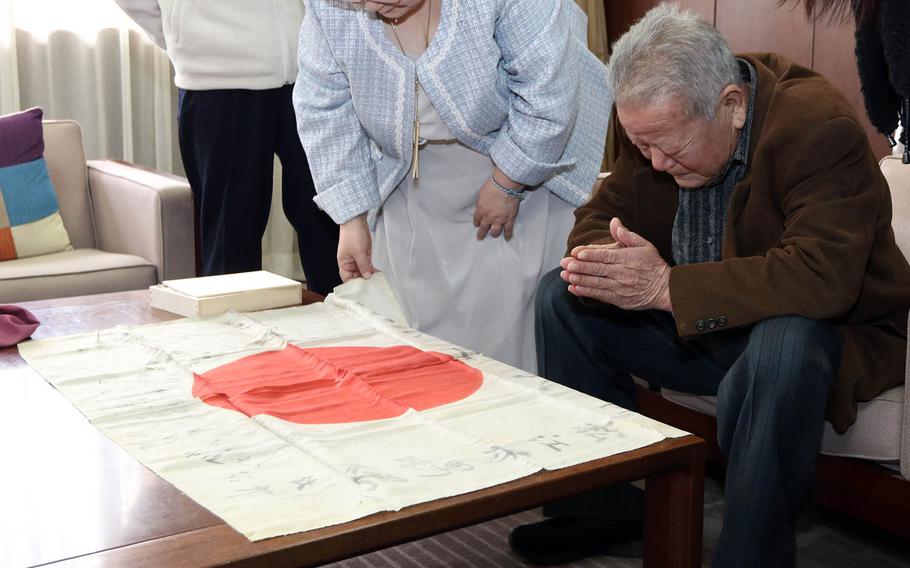 Jitsuo Matsue prays over a flag carried by his father, Hisao Matsue, during World War II, after it was returned to his family at the town hall in Kamigori, Japan, March 17, 2019. (Courtesy of Kamigori Town Hall)

Jitsuo Matsue prays over a flag carried by his father, Hisao Matsue, during World War II, after it was returned to his family at the town hall in Kamigori, Japan, March 17, 2019. (Courtesy of Kamigori Town Hall) 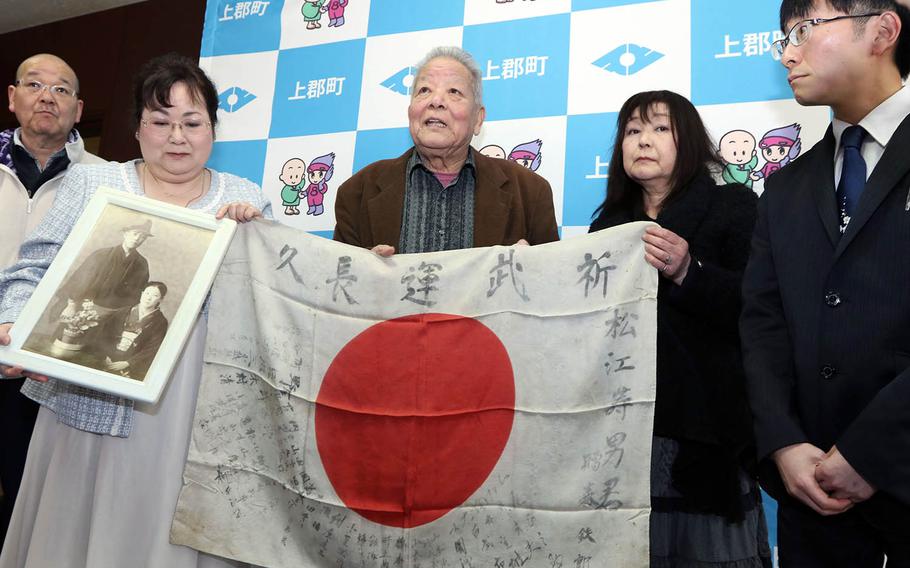 The family of Hisao Matsue holds the Japanese flag he carried during World War II after it was returned to them at the town hall in Kamigori, Japan, March 17, 2019. (Courtesy of Kamigori Town Hall)

TOKYO — A lost Japanese World War II flag is finally home after a search sparked by the family of the Navy pilot who brought it back from the Philippines in 1945.

The red and white flag was returned March 17 to relatives of Japanese sailor Hisao Matsue, who died at age 36 on the Philippine island of Luzon in 1945.

It was discovered in 2013 among possessions left by former Navy Cmdr. Clarence Miller, of Moline, Ill., who died in 1984 at age 77.

His family decided to look for its original owner after reading a story about the return of another WWII-era Japanese flag, Miller’s granddaughter Amy said in an email March 29.

In recent years, a number of veterans’ families have returned Japanese flags that were taken as war trophies during WWII.

Such flags were often signed by Japanese servicemembers’ families, neighbors, schoolmates and co-workers wishing for good fortune in war. The warriors would then fold the flag and carry it into battle.

“He never talked about the war, so we don’t know exactly where we got it, but he was a pilot and picked up and transported U.S. military, so we assume he was given it by a friend,” Amy Miller said of her grandfather.

The Japan War Bereaved Family Association and one of Miller’s former Japanese co-workers, Shingo Takashima, helped identify Matsue as the flag’s owner based on names written on it in kanji script.

The association tracked down Matsue’s son, Jitsuo, in the town of Kamigori in Hyogo prefecture, said Takashima, who attended the return ceremony.

“We were so relieved to finally have an answer, that there was living family we could return it to and glad that they were happy to have it back,” Amy Miller said.

Jitsuo Matsue’s only memory of his father is telling him not to go when he left for the war, daughter Hitomi Takahashi said in a phone interview.

“We thought he was happy since his shoulder was shaking when he saw the flag,” she said of her father during the ceremony. “He had nothing that belonged to his father. This is the only relic. For him, his father had finally returned.”