Cmdr. Micheal Wagner talks to reporters beside the guided-missile destroyer set to be commissioned as the USS John Finn at Pearl Harbor, Hawaii, Thursday, July 13, 2017. (Wyatt Olson/Stars and Stripes)

Cmdr. Micheal Wagner talks to reporters beside the guided-missile destroyer set to be commissioned as the USS John Finn at Pearl Harbor, Hawaii, Thursday, July 13, 2017. (Wyatt Olson/Stars and Stripes) 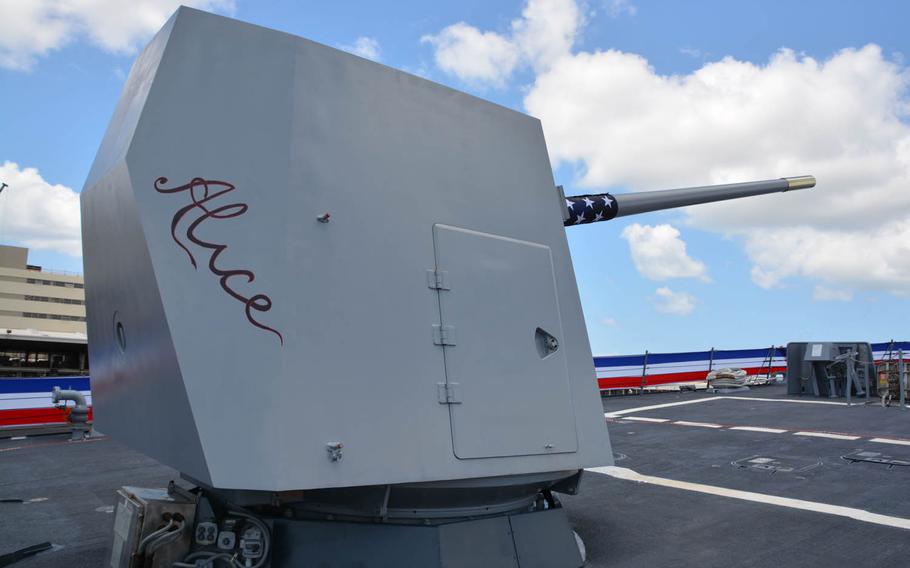 The Alice Gun, the 5-inch cannon on the bow of the USS John Finn, honors the wife of the destroyer's namesake, a Marine who survived the 1941 Pearl Harbor attack and was awarded the war's first Medal of Honor. (Wyatt Olson/Stars and Stripes) 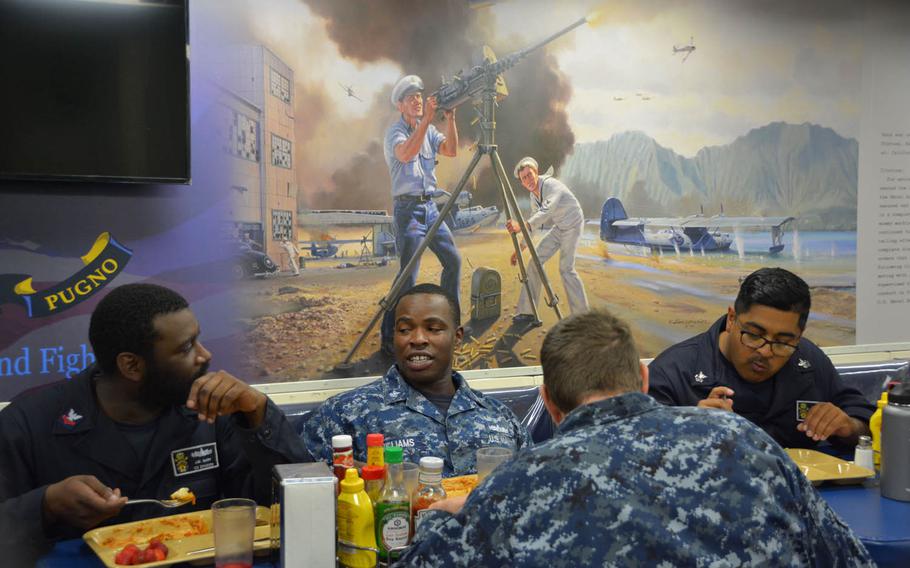 Enlisted sailors eat near a mural in the dining area of the USS John Finn that commemorates the ship's namesake for his actions during the 1941 Japanese surprise attack on Oahu, Thursday, July 13, 2017. (Wyatt Olson/Stars and Stripes) Workers unfurl bunting on the conning tower of the ship to be commissioned as the USS John Finn, Thursday, July 13, 2017. (Wyatt Olson/Stars and Stripes)

On the other side of the island, a fleet of aircraft laid waste to Battleship Row in Pearl Harbor during the Dec. 7, 1941, attack. On the windward side the island, planes ravaged Finn’s body with almost two dozen wounds.

A Marine Corps chief aviation ordnanceman, Finn was awarded the first Medal of Honor of World War II. He survived the attack and his wounds, living to the ripe age of 100 when he died in 2010.

On Saturday, the Navy will commission the USS John Finn, its latest Arleigh Burke-class guided-missile destroyer.

“It’s incredibly humbling to be here and be in charge of this great ship,” Cmdr. Micheal Wagner told reporters Thursday while standing on the dock beside the ship. “I mean, the namesake, John Finn, was such a great American. Anybody who’s ever met him – he was very humble. He didn’t think he was a hero, just thought that he was in the right place at the right time to do that.

“I think that fighting spirit is going to live in this ship,” Wagner said.

The ship will be homeported in San Diego, but given Finn’s immortal connection with Hawaii, officials decided it was fitting to commission it here.

The ship’s sponsor will be Laura Stavridis, the wife of retired Adm. James Stavridis, a former Supreme Allied Commander, Europe.

Its name was chosen by former Secretary of the Navy Ray Mabus.

Weighing just over 9,100 tons, the Finn was built by Huntington Ingalls Industries in Pascagoula, Miss. Carrying a crew of roughly 300, it is just over 500 feet long and driven by four turbines and two propellers for a top speed of about 35 mph.

This is the first missile destroyer to be built from the keel up with the Aegis Weapons System that combines air and missile defenses, he said.

“It can do integrated air and missile defense, meaning you can do air defense and ballistic missile defense at the same time,” he said. “That takes a lot of computing power, and this ship is built with that.”

Several other ships have been retrofitted with that capability, he said.

After the commissioning, the Finn will head for southern California for qualification trials during which its combat systems will be tested with live fire.

On the morning of the 1941 surprise attack, Finn was at his home about a mile from the Marine Corps aircraft hangars. He raced to the scene of the attack, taking over a 50-caliber machine gun manned by painter, telling him that he had more training in firing it.

Adm. Chester Nimitz personally presented him the Medal of Honor in September 1942 aboard the USS Enterprise while at Pearl Harbor.

Finn retired from the Navy in 1956 as a lieutenant.

He was the last living Medal of Honor recipient from the Pearl Harbor attack.

One wall in the enlisted dining area of the Finn is devoted to a mural depicting Finn’s wife, Alice, inspecting the Medal of Honor adorning the then-young sailor’s chest. Behind them are the mountains that stand in the center of Oahu.

Mrs. Finn, who died in 1998, holds another place of honor on the ship’s bow. The 5-inch cannon there is called the Alice Gun, and her oversized signature is scrawled across the turret.