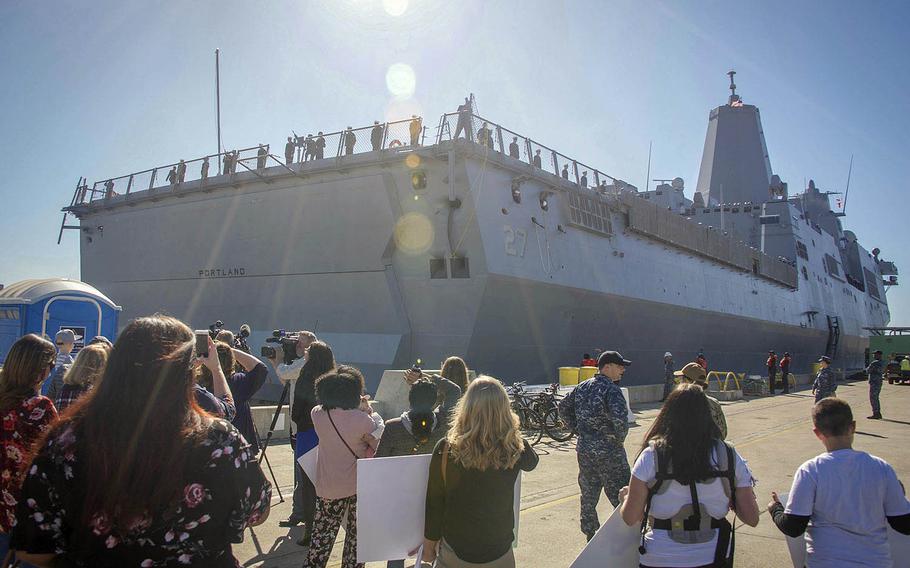 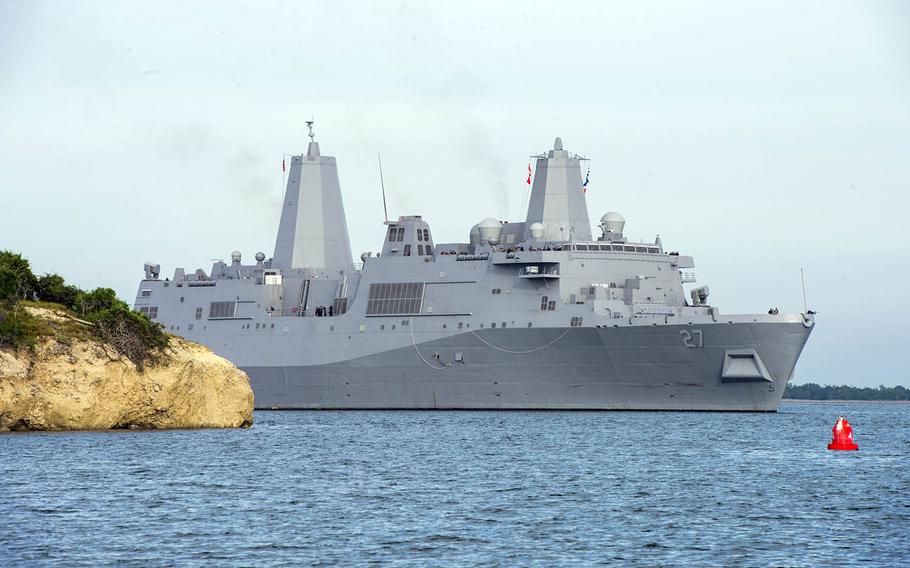 The Navy will bolster its amphibious force by adding a new ship to its ranks over the weekend.

The amphibious transport dock the USS Portland will be commissioned Saturday in Portland, Ore., in a ceremony attended by Deputy Secretary of Defense Patrick Shanahan and Bonnie Amos, the ship’s sponsor and wife of retired Marine Corps commandant Gen. James Amos.

The Portland — which will be homeported in San Diego — is the 11th San Antonio-class amphibious ship in the Navy’s inventory, and boasts the ability to embark more than 800 Marines and accommodate the MV-22 Osprey tilt-rotor aircraft. It can also launch and recover landing craft and amphibious vehicles.

“In summary, Navy and Marine Corps units completed training for certain amphibious operations priorities but not others due to several factors,” he said. “The most prevalent factor we found that hampered training completion was a lack of available amphibious ships on which to train. The Navy and Marine Corps have taken some steps to identify and address amphibious operations training shortfalls, but these efforts are incomplete.”

The number of amphibious transport docks has been declining since a peak in the 1980s when the Navy had 16 such vessels. The service expects to have 12 in its ranks by 2024, according to a Government Accountability Office report released in December.

The USS Portland was tentatively chosen to serve as the flagship for this summer’s Rim of the Pacific naval exercise in Hawaii, Capt. Brian Metcalf, program manager for landing platform dock amphibious warfare vessels, said in January at the Surface Navy Association’s annual symposium in Arlington, Va. However, the final decision will not be made until a RIMPAC planning meeting this month, Navy officials said.

The ship is slated this fall to be fitted with the next generation of the Navy’s laser weapons system for testing, according to USNI News. The previous iteration was tested in the Middle East aboard the USS Ponce.

Secretary of the Navy Richard Spencer said the new ship will be entering a world of “dynamic security challenges.”

“USS Portland enters service in a period of dynamic security challenges, and I am confident this ship and crew will conquer these and future challenges because of the strength and talent of the Sailors and Marines who will serve aboard this ship,” he said in the Pentagon statement. “I am certain that USS Portland will proudly represent both the Unites States and the people of Portland in maritime operations around the world for decades to come.”

The vessel is the third Navy ship to bear the name Portland. The first was a cruiser commissioned in 1933 and named after Portland, Maine. It fought in the Guadalcanal, Leyte Gulf, Corregidor and Okinawa campaigns of World War II.

The second USS Portland was a dock landing ship commissioned in 1970 and named after both cities in Maine and Oregon, and participated in a variety of missions in its more than three-decade career. These included the 1976 evacuation of American citizens from Lebanon, the 1983 multinational peacekeeping mission to Beirut, Lebanon, and deployment of Marines to Kuwait in support of Operation Iraqi Freedom.

The commission ceremony, which is set to begin at 10 a.m. Saturday, local time, can be watched online at http://navylive.dodlive.mil/.