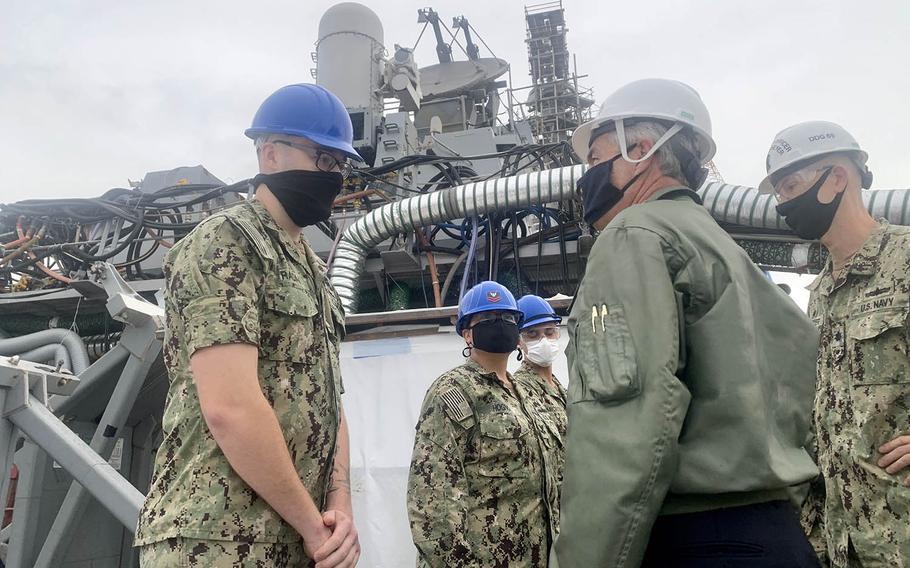 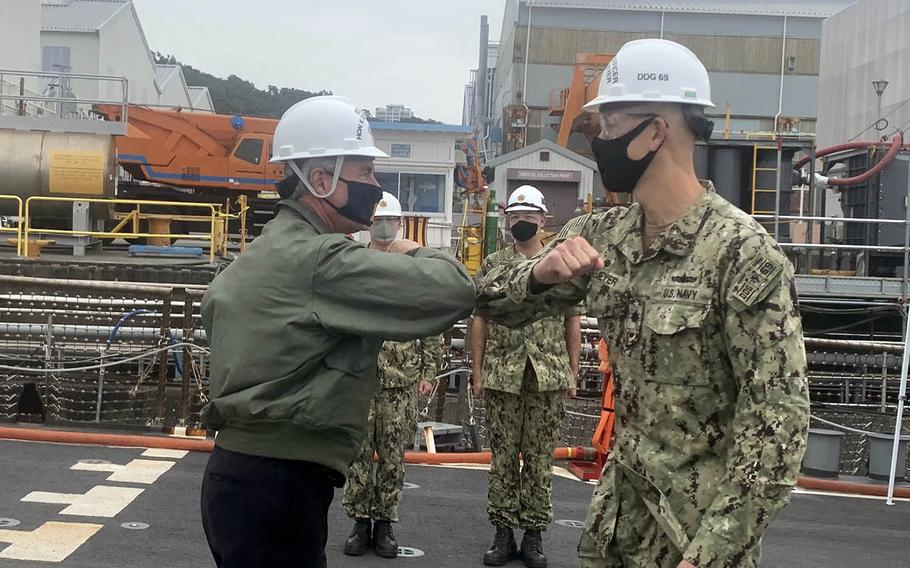 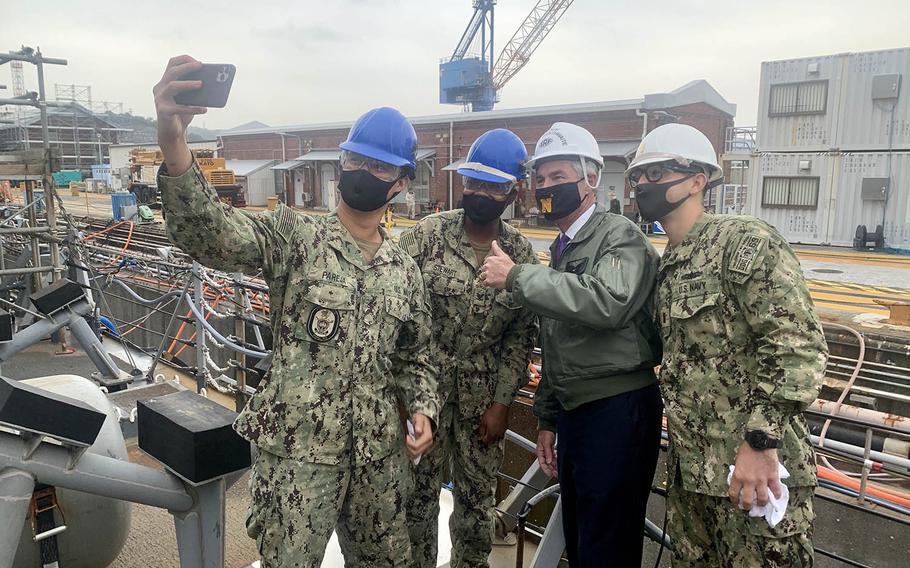 YOKOSUKA NAVAL BASE, Japan — The Navy’s top civilian leader on Thursday toured a guided-missile destroyer undergoing maintenance during his first-ever visit to the service’s largest overseas base.

Navy Secretary Kenneth Braithwaite met USS Milius sailors with a congenial, “Hi, I’m Ken,” aboard the ship that has been in dry dock since early May.

As the Navy pushes to grow its fleet, maintaining existing warships and extending their service lives are a continuing priority. Braithwaite told Milius sailors that while he understood their desire to be at sea, spending time training ashore and working on the ship are crucial to success.

“I know you’re in the ‘yards now but what you’re doing here will make you better prepared,” Braithwaite told crews in the destroyer’s bridge during his tour.

Congress in 2018 made law the Navy’s goal of a 355-ship fleet, now due by 2035. Last week, Defense Secretary Mark Esper announced a new modernization plan — dubbed “Battle Force 2045” — that boosted that goal to a mixture of 500 manned and unmanned ships within 25 years.

The Navy had 296 ships in service as of Oct. 6, according to the Naval Vessel Register.

While shipbuilding will be a top priority, Esper said during his speech Oct. 6, quick and efficient ship maintenance will also play a role.

“We cannot build and sustain our proposed fleet without the ability to service and repair a greater number of vessels in a more timely fashion,” the defense secretary said, according to a transcript of his speech.

While new ships are under construction, the targeted fleet size “cannot be reached if existing ships are not maintained to their full service-lives,” according to a Congressional Research Service report on Navy force structure and shipbuilding plans published Oct. 7.

In his speech, Esper called shipyard capacity and maintenance delays the Navy’s Achilles’ heel, necessary to overcome to “maintain a high level of readiness.”

“We will continue our efforts to revitalize and expand the Navy’s four shipyards while promoting partnerships with private shipyards across the country without pulling from the shipbuilding account,” he said, according to the transcript.

The Milius’ commanding officer, Cmdr. Rob Niemeyer, on Thursday said he spoke with Braithwaithe about the “deep-dive on maintenance and preservation” on the 24-year-old destroyer at the U.S. Naval Ship Repair Facility in Yokosuka.

“We work our ships out here in 7th Fleet like nowhere else,” Niemeyer said Thursday. “This maintenance period is a critical time for us to reset so that we are ready to get back in operation.”

Niemeyer said the “vision of this deeper-level maintenance period” is to ensure the ship can remain in service for years to come.

“It’s our job to make sure that the ship can exceed its expected service life and it’s our charge to make the ship younger,” he said. “We are stewards of the American taxpayer and American people who have entrusted this ship to us.”

The pressure to grow the Navy’s fleet intensifies as China recently became the world’s largest navy with more than 350 ships and growing. The Pentagon’s China report released Sept. 1 determined Beijing aims to have a “world-class” military on par with the United States by 2049.

The Defense Department considers China a strategic competitor, leading Esper to call the Indo-Pacific the military’s “priority theater.” Tensions over Beijing’s militarization of islands and reefs in the South China Sea have frayed relations between the two countries. The Navy regularly challenges Chinese claims through freedom-of-navigation exercises.

Braithwaithe declined on Thursday to further address the Navy’s expanded fleet goals, but in a statement after his tour emphasized the importance of “maintaining a competitive advantage in this complex global security environment.”

“For more than 75 years, the United States has maintained a continuous forward presence throughout the Pacific,” he said. “Today, we continue our efforts in this region as we work with our partners and allies to ensure peace and stability for a free and open Indo-Pacific.”

Yokosuka was Braithwaite’s first stop on his brief trip this week to the Indo-Pacific. After meeting with sailors Thursday morning, he said he planned to meet with Japanese Defense Minister Nobuo Kishi in Tokyo before visiting leaders in Singapore, Palau and Guam in the coming days.