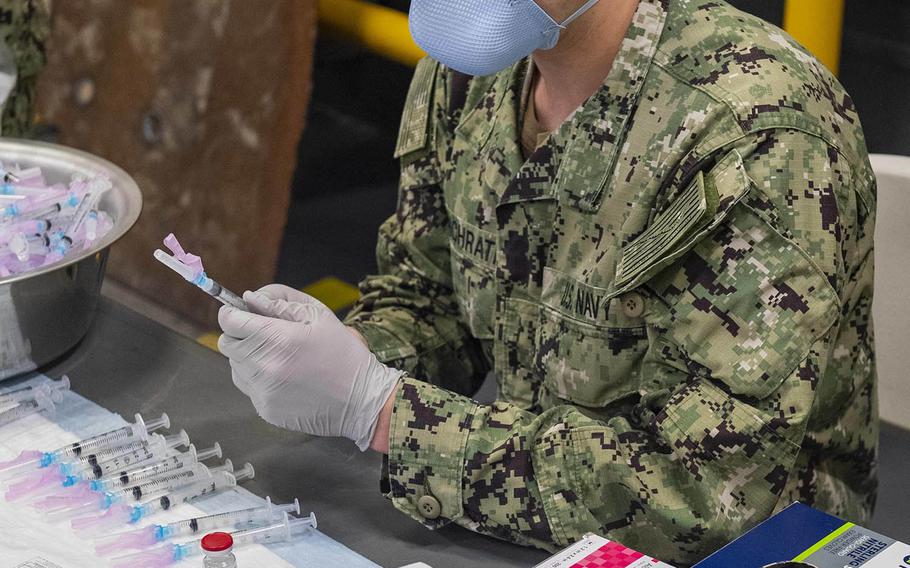 TOKYO — Hang in there — more coronavirus vaccines, including a new one-dose version, are bound for U.S. bases in Japan, a pair of Navy medical officers said this week.

The U.S. military in coming weeks expects further shipments of the Moderna vaccine, the two-shot series that first arrived Dec. 26 at bases in the country. It also expects shipments of a new vaccine developed by Johnson & Johnson, also called the Janssen vaccine after the pharmaceutical division of the company that developed it.

The Johnson & Johnson dose is 85% effective in preventing severe or critical cases of COVID-19 at least 28 days after vaccination, according the U.S. Food and Drug Administration. The FDA approved the drug for emergency use on Saturday. COVID-19 is the respiratory disease caused by the coronavirus.

Medical officers at Yokosuka Naval Base south of Tokyo and Sasebo Naval Base on the southern island of Kyushu bolstered their audiences with encouraging news Wednesday and Thursday during Facebook Live sessions, but they were short on details of when and how much vaccine they expect to arrive.

“I know it is frustrating. It is frustrating waiting and I am frustrated with you, and for you,” said Capt. Carolyn Rice, a physician and commander of Yokosuka Naval Hospital, on Thursday.

Ninety percent of those offered the vaccine at Yokosuka have accepted it, she said. That’s higher than the 70% of all military personnel offered the shots, so far, the Defense Department said recently.

The Moderna vaccine is one of three approved by the FDA for emergency use, which means the military cannot mandate its use. It must be taken voluntarily. The other is the Pfizer-BioNTech vaccine.

Bad weather and deliveries to sites that were designated after Yokosuka and other bases in Japan slowed the rollout of vaccine supplies the past three weeks, Rice said.

Everyone at Sasebo waiting on a second Moderna shot should have it by the end of March, Dohm said.

The clinic is inoculating everyone in phase 1a and 1b on the Defense Department priority list, or schema, he said. Phase 1a consists of health care workers, and emergency services and public safety personnel. Phase 1b are service members deployed or preparing to deploy, essential workers and some people 75 and older.

The remaining population, the bulk of those waiting for the vaccine, constitute phase two.

“Hopefully by the time April rolls around we’ll go into that phase two, or that healthy population,” Dohm said, “and some of our high-risk folks may be coming sooner than that, I don’t know.”

The Defense Health Agency set a goal of inoculating 80% of the 9 million people in the military health care system by July 4, Rice and Dohm said.

Other U.S. services in Japan in some cases are ahead of the Navy in the DOD schema, both said. The reason is the Army and Air Force are 1/20th of the Navy’s population in Japan, which is about 40,000 people, according to Dohm and Rice.

“Some of the other installations they’ve maybe been able to move into that phase two way before the Navy has,” Dohm said.

A representative for U.S. Forces Japan did not respond Thursday to a request from Stars and Stripes for further information.

“We do expect to get some of that vaccine here in the next month or so, maybe as soon as next week,” he said. “It may come, it may not. But we will have that as an option at some point in time.”