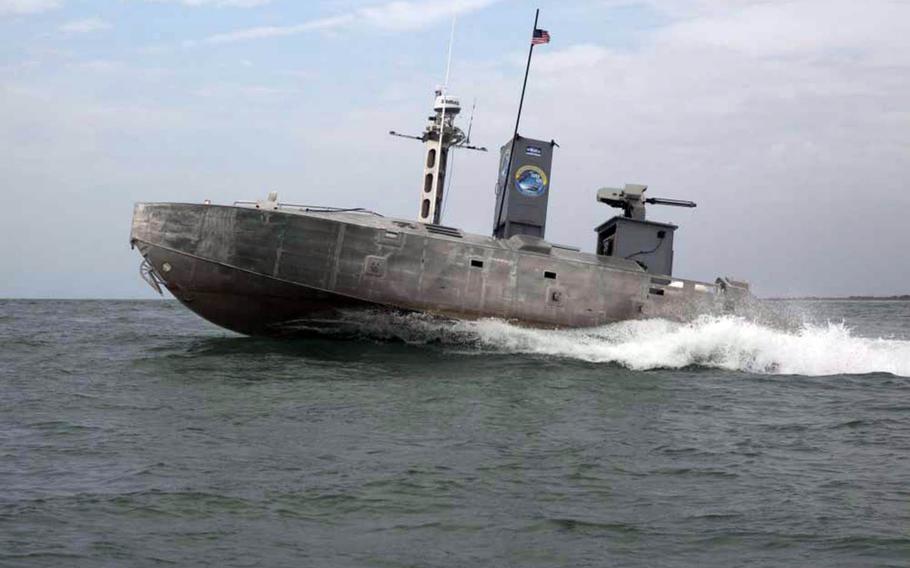 The Navy could swap out some traditional ships with crewless vessels as the service fast-tracks its goal of adding large unmanned vehicles to the fleet, according to a recent Congressional Research Service report.

The Navy aims to shift toward “a more distributed fleet architecture,” one with fewer guided-missile cruisers and destroyers, more frigates and littoral combat ships and “significant numbers” of large unmanned ships and submarines, according to the research service’s “Navy Large Unmanned Surface and Undersea Vehicles” report issued Sept. 8.

In its 2021 budget request to Congress, the Navy asked for nearly $580 million for research and development of large unmanned vessels and use accelerated acquisition strategies “to get them into service more quickly,” according to the report.

Large unmanned surface vessels, or USVs, would be about 200-300 feet long and capable of carrying various weaponry, “particularly anti-surface warfare and strike payloads, meaning principally anti-ship and land-attack missiles,” according to the report. The Navy aims to develop two prototypes next year, one in 2022 and procure a deployable large USV in 2023.

The medium USVs would be 45-190 feet long and used initially for “intelligence, surveillance and reconnaissance payloads and electronic warfare systems,” according to the report. The Navy in July awarded a $35 million contract to L3 Technologies Inc. to develop a prototype.

Staying ahead of China is one reason behind the Navy’s request for more unmanned vessels.

“The Navy’s desire to employ these accelerated acquisition strategies can be viewed as an expression of the urgency that the Navy attaches to fielding large UVs for meeting future military challenges from countries such as China,” the report said.

Washington and Beijing are at odds over China’s militarization of islands in the South China Sea. The U.S. military regularly patrols the region, often sending warships and military aircraft on freedom-of-navigation operations near the islands to challenge territorial claims, drawing the ire of Beijing.

At 350 ships, China this year became the world’s largest navy, according to a Sept. 1 Pentagon report to Congress on Chinese military developments. The U.S. Navy had approximately 293 as of early 2020.

The U.S. aims to have a fleet of “not fewer than 355 battle force ships, comprised of the optimal mix of platforms,” according to the 2018 National Defense Authorization Act. Congress did not establish a timeline for reaching that goal, but the Trump administration has said it wants this accomplished by 2028.

While unmanned vessels don’t currently count toward that 355-ship goal, including them in the tally could help ensure the Navy “has an adequate number of ships but is unable to properly crew, arm, operate, and maintain those ships,” according to the report.

“Navy officials state that while the 355-ship goal is a priority, they want to avoid creating a so-called hollow force,” the report said.

The Office of Management and Budget has directed the Navy to ask Congress to include “large unmanned UVs that operate essentially as unmanned ships” in its ship count once deployable, according to the report.