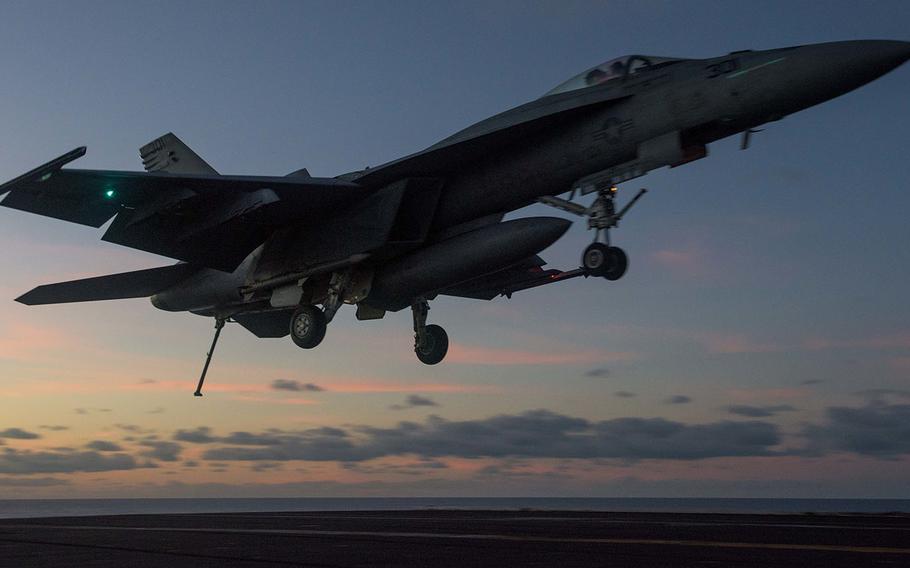 MARINE CORPS AIR STATION IWAKUNI, Japan — Navy pilots are honing carrier-landing skills ahead of their next deployment on the USS Ronald Reagan.

Carrier Air Wing 5, which is assigned to the Yokosuka, Japan-based aircraft carrier, kicked off training Thursday that aims to get the fixed-wing pilots to maximum proficiency for carrier operations.

“The most important aspect of this training is getting our pilots back in the mindset of operating off of a carrier over open ocean,” Lt. Cmdr. Matt Knight, a Task Force 70 spokesman, told Stars and Stripes in an email this week.

“The refresher training prior to deployment exercises the full spectrum of skills from the basics of carrier operations, to the more advanced aspects of landing on a carrier at sea,” Knight said.

Pilots will land day and night, with most of the action taking place on Iwo Jima, which is known by the Japanese as Iwo To, a Navy statement said.

After the land-based training, the pilots will conduct day and night landings on the Ronald Reagan, Knight said.

The training will wrap up on May 13.