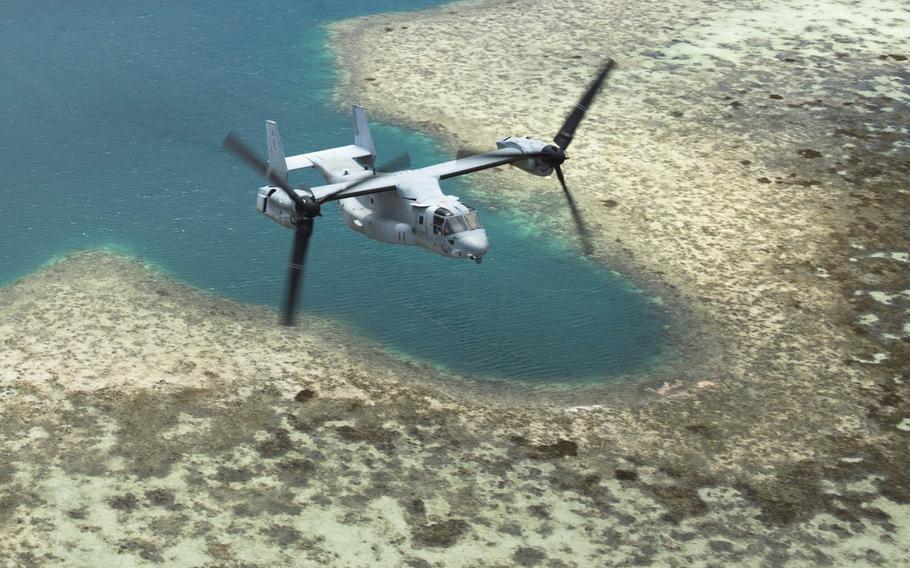 An MV-22 Osprey tiltrotor aircraft flies over the Northern Marianas Islands, Aug. 13, 2015. The Department of Navy has ordered further environmental study ahead of a proposed training facilities expansion on the U.S. commonwealth's Tinian and Pagan islands in the northern Pacific. (Courtesy of the U.S. Navy)

The Department of the Navy has ordered further environmental study after strong opposition to its proposed expansion of training facilities in the Commonwealth of the Northern Mariana Islands near Guam.

An avalanche of opposition from residents and local officials to the draft environmental impact statement on Tinian and Pagan islands could force the Navy to drastically downsize its plan — or even to look elsewhere.

The Navy announced the supplemental analysis Oct. 2, and it’s expected to be completed by early next year. It will take a closer look at the project’s possible impact on Tinian’s groundwater aquifer and on coral reefs near both islands.

The Navy is reviewing about 9,000 comments received on the draft statement, which was released in April, said Maj. Tim Patrick, a Guam spokesman for the project.

“While the Department of Navy hasn’t completed a review of all those 9,000 comments, they became aware of at least two areas that warranted supplemental analysis,” he said.

Northern Marianas government agencies and the U.S. Environmental Protection Agency recommended further study of impact on the aquifer and coral, he said.

“Rather than waiting months and months into the future, we’d prefer to be more proactive and start to look at some of the things that have garnered attention and begin conducting extra analysis on those things now,” he said.

The Navy wants to acquire the entire island of Pagan for live-fire training and to significantly upgrade training facilities on Tinian, where the U.S. holds leases to two-thirds of the island. Expanding live-fire ranges and training areas on Tinian and Pagan is necessary to increase joint military training capabilities, the Pentagon said.

The call for supplemental analysis does not change the Navy’s preferences for the project, though it’s possible that new information could lead to modifications.

The military expansion has met an onslaught of local opposition.

Last month, Tinian Mayor Joey Patrick San Nicolas sent a letter to the Navy outlining a host of objections to the project and alleged deficiencies in the environmental impact statement, asserting that the Department of Defense had failed to explore reasonable alternatives and to comply with the National Historic Preservation Act. He also said the analysis gave short shrift to the Endangered Species Act and the Marine Mammal Protection Act.

“Let us be clear: The people of Tinian oppose and will continue to oppose any plans to carry out the training described in the [EIS],” San Nicolas wrote. “We will do everything that we can — legally, politically and socially — to protect our families, our culture and our island.”

Earlier this month, Northern Marianas Gov. Eloy Inos submitted the commonwealth’s lengthy response to the draft statement, noting in a cover letter that the proposal “to take the entire island of Pagan for large-scale, live-fire training” would “radically and unilaterally alter the previously agreed activities limited to a portion of Tinian.”

“As proposed, these actions represent an existential threat to our tourism-driven economy, our fragile ecosystem, our cultural resources, and indeed our way of life,” the letter said.

Among the many objections submitted to the Navy by the governor’s office was the failure to explain how the increased military presence would affect the Northern Marianas’ burgeoning influx of tourists from China and Russia.

The governor’s office also said the conclusion that live-fire activities on Pagan would not interfere with ecotourism is “simply not credible.”

The Navy also faced strong local opposition in Guam in recent years over extensive plans to build facilities and firing ranges for Marines slated to relocate from Okinawa. That opposition was among the factors leading the Navy to scale back the original plan, with all construction now limited to land already owned by the federal government.