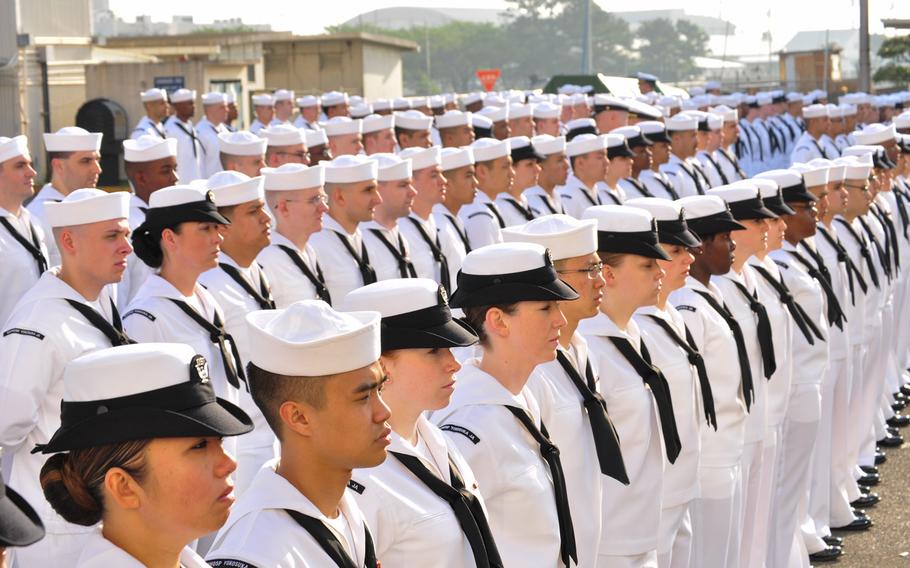 The Navy on Wednesday announced new incentives that include allowing first-term enlisted sailors to have their families with them overseas to entice longer sea duties in Japan, Guam and Spain.

Effective immediately, first-term sailors E3 and below can bring family members to overseas locations where dependents are authorized. There are about 3,800 sailors in those grades in Japan and about 400 in Guam, the Navy said.

The Navy’s forward-deployed fleet in the Pacific has been under a microscope since back-to-back collisions of destroyers last year left 17 sailors dead.

Reports by the U.S. Government Accountability Office and the Navy have documented numerous deficiencies in the forward-deployed fleet, including insufficient manning and training, delayed maintenance and general sailor fatigue from overwork.

The Navy is in the process of instituting reforms to address those problems.

Seaman Legree Hairston, an aviation ordnanceman on the USS Ronald Reagan, said accompanied tours for E3 sailors and below would bolster morale for those experiencing life abroad for the first time.

“I would find things easier – I wouldn’t be so stressed out,” said Hairston, who has been stationed in Yokosuka, Japan for just a few months. “I wouldn’t miss home so much.”

Another incentive announced Wednesday calls on sailors to extend their sea duty in Japan, Guam and Spain voluntarily to a minimum of four years. Those sailors will have any remaining sea time on their prescribed tour length waived and would be guaranteed shore duty for their next assigned tour.

Petty Officer 3rd Class Amaechi McMillan, a culinary specialist aboard the Ronald Reagan who’s set to transfer this summer, said he would have extended his tour in Japan in exchange for shore duty on his next rotation if he had the opportunity.

“It is beneficial to someone in my shoes because in my rate, you don’t get shore duty until [you have served] five years,” he said.

Additionally, sailors extending their tours by a year or more will be given preferential consideration for announced billets in the Career Management System/Interactive Detailing, a web-based system used to view and apply for jobs.

“If multiple preferential applications are made for the same advertised billet, the best qualified member will be selected,” the Navy said.

Seaman Apprentice Yunior Castano Perez, a hospital apprentice at Yokosuka Naval Base, Japan, said having a better chance of getting his desired duty station would convince him to double his current two-year tour.

“I would like to pick somewhere outside the U.S. to get to explore,” he said. “I want to see the world.”

Sailors who extend their tours for at least a year will still have the option to receive Sea Duty Incentive Pay, the Navy said. The armed forces-wide Overseas Tour Extension Incentive Program also remains an option for eligible sailors.

“Our goal is to reward those sailors who volunteer to extend to meet the demands from the fleet," said Rear Adm. John Meier, director of the Career Management Department for the Navy Personnel Command. "In addition to the incentives already in place, which remain options for sailors who meet extension criteria, these additional incentives should make it easier for sailors who make the decision to extend.”

For some sailors, the incentives may not be enough. Petty Officer 2nd Class Meagan Yarger is already on shore duty at the Naval Computer and Telecommunications Station Yokosuka. She said she is not happy overseas and would not extend her current three-year tour.

“I’ll still be leaving. I can’t talk to [Japanese-speaking] neighbors; I don’t like using yen,” she said. “The Navy is not for me.”

During a talk in January with sailors and family members at Yokosuka Naval Station in Japan, Vice Adm. Robert Burke, chief of naval personnel and deputy chief of naval operations, said tour lengths of four years could become mandatory.

Many overseas tours for military personnel are capped at two or three years and that has contributed to the forward fleet’s crisis.

“A sailor gets [to Japan and] they’re taking 14 to 18 months to learn their training and then maybe doing their job for a short months period of time before it’s time for them to move again,” Burke said. “That puts the commands in a state of continuously having to train up their people and not having a seasoned, experienced crew that can train up the new junior folks.”

Sailors interested in any of the incentives must request an extension 14 to 18 months before their projected rotation date, the Navy said.