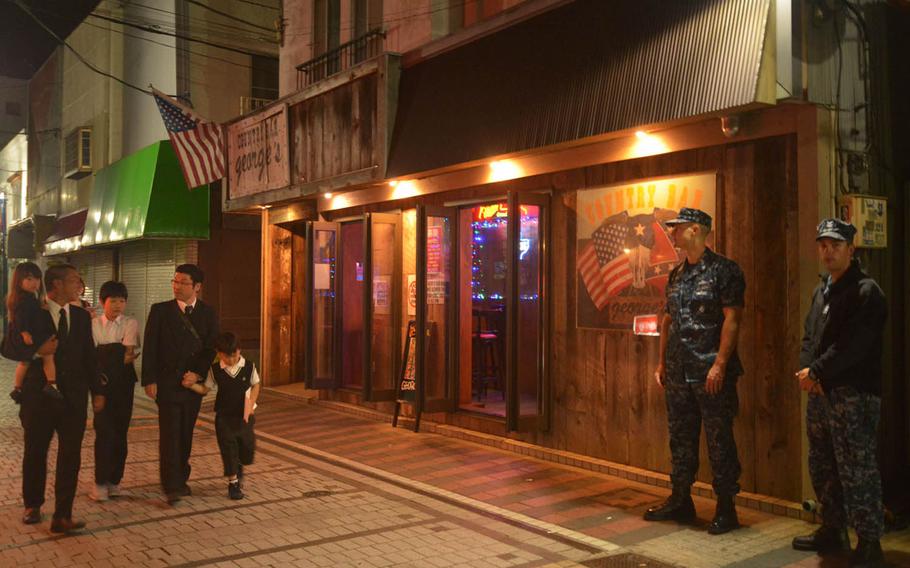 Michael Nelson, second from right, a Navy petty officer second class who works as an intelligence specialist with the 7th Fleet out of Yokosuka Naval Base, Japan, and Devon Hays, right, a petty officer second class assigned to the USS Blue Ridge, patrol Honch, a drinking district outside the base popular with servicemembers, Monday, June 6, 2016. A ban for sailors in Japan from nonessential off-base activities and drinking alcohol has been lifted, Navy officials announced Tuesday. (Tyler Hlavac/Stars and Stripes)

YOKOSUKA NAVAL BASE, Japan — Sailors in Japan are now allowed to drink alcoholic beverages off base until 10 p.m., as Navy officials Tuesday continued to gradually ease restrictions put in place after multiple arrests strained U.S.ties with one of its closest security allies.

The restrictions, which began June 6, will be rolled back in about two weeks to prior levels that allowed drinking off base until midnight, if sailors continue to exercise good judgment, Navy officials said.

“Over the past few weeks, the performance of sailors across Japan has been outstanding,” Rear Adm. Matthew Carter, commander of Naval Forces Japan, said in a statement. “They recognize that liberty is a mission, especially here in Japan.

They know that their performance in this mission area has a direct impact in preserving the vital strategic relationship with the Japanese, and preserving peace and stability in the Western Pacific.”

The Navy has asked civilians, family members and base contractors to “show solidarity” with sailors and refrain from drinking after 10 p.m., though they are not required to do so.

The incident came during a military-enacted period of mourning in honor of Rina Shimabukuro, 20, whose body was found in a forest on Okinawa. Kenneth Franklin Gadson, a U.S. civilian base worker, has been charged with illegally disposing of Shimabukuro’s body, and police have recommended murder and rape charges.

Mejia has been charged with dangerous driving resulting in injuries, which carries a maximum penalty of 15 years in prison, police said Monday. Mejia’s blood alcohol limit was 0.18, six times Japan’s legal limit, according to police.

The incidents fueled one of the largest protests in decades on Okinawa, an island of 1.4 million people where about half of all U.S. forces in Japan are stationed.

Navy officials said the Mejia incident was the tipping point of a behavioral “negative trend” in 2016. The Navy recorded 13 off-base incidents under Japanese jurisdiction in January and February, which put the service on track for a more than 50 percent rise over 2015.

For about four days, the Navy barred all non-essential travel off-base. Commanding officers, executive officers and command master chiefs conducted face-to-face training with each of the Navy’s roughly 18,600 sailors in Japan, emphasizing how bad behavior can complicate the service’s efforts to operate in the Asia-Pacific region.

Vice Adm. Joseph Aucoin, commander of the U.S. 7th Fleet, said in a statement Tuesday he was encouraged that sailors were responding to the Japan-wide training.

“We’re on a good start, a good trend, and I want this to continue,” Aucoin said. Sailors still weren’t allowed to drink any alcohol until June 17, when CNFJ and 7th Fleet officials allowed drinking on base and in sailors’ own homes.

Sailors in paygrades E-5 and below must still file a daily plan for non-essential activities off-base, or a plan for the weekend, with their department heads.

That requirement will also end if good behavior continues, giving way to policies left to the discretion of individual commands, Flanders said.

Many sailors felt the restrictions were imposed for good reason but were somewhat heavy-handed.

“I’m not a big drinker, but it did suck knowing that we are all adults and we weren’t trusted to drink off base,” said Petty Officer 1st Class Franz Malitig, a hospital corpsman with Yokosuka’s Naval Hospital. “That was their (CNFJ) way of sending us a message to stop what we we’re doing.”

“I understand why the ban was put into place, but banning the entirety of 7th Fleet seemed a little over the top,” said Petty Officer 3rd Class Evan Ermey, an information systems technician with the USS Blue Ridge. “I’m happy that they removed the ban and imagine now that everyone is going to be pretty happy and relaxed.”

Seaman Apprentice Isaiah Gilman of the USS Blue Ridge echoed the concern of many sailors that some might drink excessively now that the ban has been lifted, especially with the upcoming Fourth of July holiday.

Stars and Stripes staffer Tyler Hlavac contributed to this report.