N. Koreans fired 40 rounds at soldier as he defected to South, officials say 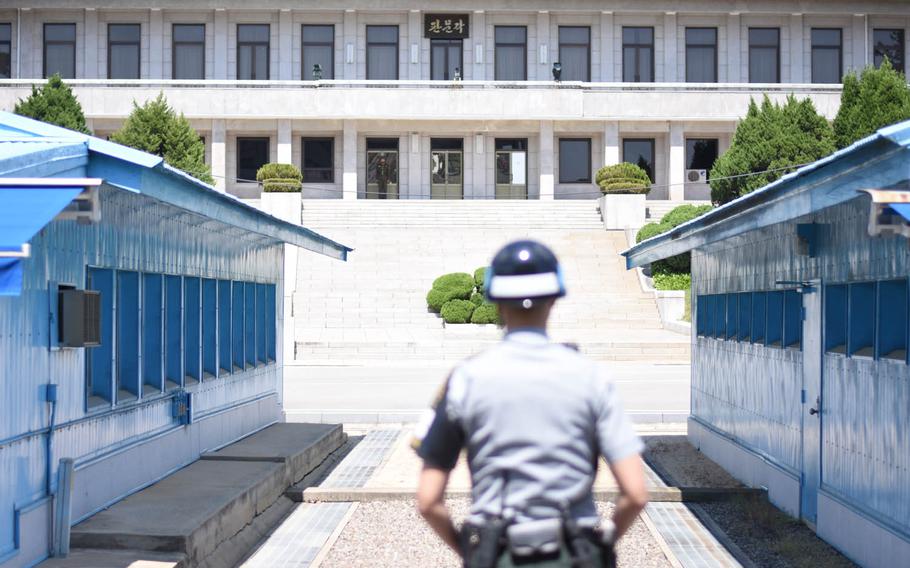 A South Korea soldier stands guard in May at the Joint Security Area of the Demilitarized Zone, which divides the two Koreas. (Aaron Kidd/Stars and Stripes)

SEOUL, South Korea — A North Korean soldier defected to the South by driving a military jeep to the line that divides the peninsula, then sprinting across it under a hail of gunfire from his former comrades, officials said Tuesday.

The stunning escape in a jointly secured area of the Demilitarized Zone happened at a time of high tensions over North Korea’s nuclear weapons program, raising fears the communist state could conduct a provocation after a two-month lull in missile-testing activity.

The soldier was airlifted to a hospital south of Seoul after he was found bleeding under a pile of leaves Monday in the truce village of Panmunjom, the only point in the DMZ where both sides come face to face. He was reportedly in critical condition.

It was the first shooting in the Joint Security Area since 1984, but U.S. and South Korean forces did not return fire.

More than 30,000 North Koreans have defected to the South since the end of the 1950-53 war, but it’s rare for soldiers to flee across the DMZ, much less the JSA.

North Korea has not commented on the shooting, but it usually responds angrily to defections and often accuses South Korea of kidnapping its citizens.

The defection came less than a week after President Donald Trump made his first official visit to South Korea amid soaring tensions over the growing nuclear and missile threat from the North.

The U.S.-led United Nations Command, which oversees the South Korean side of the JSA, said the defector drove the jeep near the de facto border line.

“He then exited the vehicle and continued fleeing south across the line as he was fired upon by other soldiers from North Korea,” it said in a statement. “The individual initially took cover near a building on the southern side of the JSA.”

U.S. and South Korean forces recovered him at about 4 p.m., then took him to Ajou University Medical Center south of Seoul, along with a UNC security escort and translator, it said.

Col. Roh Jae-cheon, a spokesman for South Korea’s Joint Chiefs of Staff, said the military first became aware of the situation around 3:31 p.m.

The soldier sped toward a guard post, but the vehicle’s wheels got stuck in a ditch, Roh told reporters. “We closely monitored the situation with a surveillance system,” he said.

The soldier was found under a pile of leaves, Roh said, adding he was in uniform but unarmed. No U.S. or South Korean troops were injured.

Separately, Suh Wook, a senior JCS official, told lawmakers that Seoul's military believes four North Korean soldiers fired about 40 shots toward the defector, who appeared to have been hit at least five times.

Lee Guk-jong, a doctor at the hospital, said the soldier suffered serious injuries and was in critical condition. The next 10 days will be crucial for his recovery, Lee was quoted as saying by the Yonhap News Agency.

South Korea’s military said it has strengthened its vigilance and readiness posture in case of a possible military provocation by the North.

The DMZ is a 2.5-mile wide, 150-mile-long buffer zone lined with barbed wire and dotted with landmines. The JSA provides the adversaries with a neutral zone and has been the site of past dialogue.

The 1953 armistice that ended the fighting but left the countries technically at war was signed in one of the blue buildings that straddle the Military Demarcation Line. It’s also a popular stop for tourists and dignitaries, including several U.S. presidents.

Trump tried to make a surprise visit to the DMZ last week, but his helicopter was forced to turn back to Seoul after heavy fog prevented it from landing at the frontier.

Violence has broken out in the area in the past. In 1984, a Soviet tourist sprinted across the demarcation line from North Korea in a bid to defect, prompting a gun battle that killed and wounded several soldiers from both sides.

The Unification Ministry said North Korean soldiers also defected across the JSA in 2007 and 1998, but military officials said no shooting occurred during those incidents.

Two American soldiers also were killed in the DMZ by ax-wielding North Korean soldiers in a 1976 brawl over an attempt to trim a poplar tree. That prompted Washington to send nuclear-capable B-52 bombers to intimidate the North before the adversaries pulled back from the brink of conflict.