N. Korean missile flew over Japan but may have been meant as message for Guam 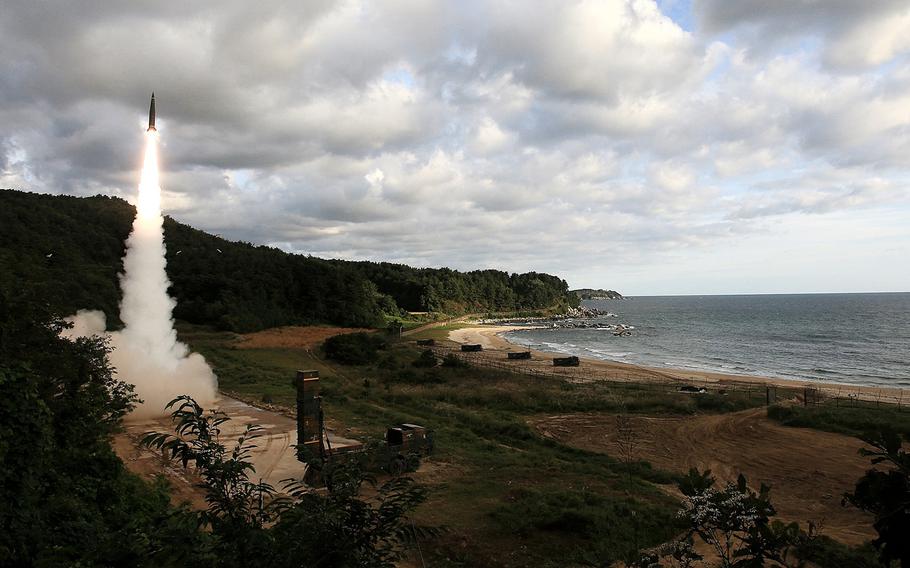 The South Korean army conducts a live-fire drill with a Hyunmoo-2 surface-to-surface missile system into the sea off the peninsula's east coast as a warning to North Korea after the communist state launched a missile over Japan, Friday, Sept. 15, 2017. ( Courtesy of the South Korean Army)

SEOUL, South Korea — North Korea defiantly fired a missile over Japan on Friday, achieving its longest such flight less than a week after the U.N. Security Council approved new sanctions aimed at punishing the communist state for its recent and most powerful nuclear test.

The launch, which followed a Sept. 3 nuclear test and weeks of heightened tensions, also appeared aimed at sending a message that North Korea could target the U.S. Pacific island territory of Guam as it has threatened to do.

The missile was fired from an area near the capital, Pyongyang, and flew over the Japanese island of Hokkaido before splashing into the Pacific Ocean about 1,242 miles east of Cape Erimo, according to U.S., South Korean and Japanese officials.

The missile reached a maximum altitude of 480 miles and traveled more than 2,300 miles, South Korea’s Joint Chiefs of Staff said.

It was the second time in less than three weeks that a North Korean missile flew over Hokkaido, prompting the Japanese government to warn citizens to take cover. No debris or damages from the missile were reported.

“North Korea trampled on the strong will for a peaceful solution and it is absolutely unacceptable that North Korea once again resorted to violent measures,” Prime Minister Shinzo Abe told reporters.

Abe also said his government was aware of the missile’s movement “from the moment it was launched and was ready for all possible measures.”

South Korea also was ready for it and conducted a nearly simultaneous missile test of its own, firing the projectiles into the sea off the peninsula’s east coast on orders from President Moon Jae-in.

The drill was conducted according to calculations about the distance to an airport in Sunan, the area where the North’s launch occurred about 155 miles away, the military said.

The military added it was maintaining “full readiness posture” against possible additional provocations from the North.

U.S. Pacific Command said an initial assessment indicated it was an intermediate-range ballistic missile that posed no threat to North America or Guam.

“Our commitment to the defense of our allies, including [South Korea] and Japan, in the face of these threats, remains ironclad. We remain prepared to defend ourselves and our allies from any attack or provocation,” PACOM spokesman Cmdr. Dave Benham said in a statement.

While it wasn’t aimed at Guam, analysts said the distance traveled by the missile showed it had the ability to reach the island, which is home to Andersen Air Force Base and a naval base and about 2,113 miles from Pyongyang.

North Korean leader Kim Jong Un said in August that he was putting on hold a military plan to fire missiles into the waters surrounding Guam, but he left open the possibility he could change his mind.

That came after President Donald Trump warned he would unleash “fire and fury” against the North if it continues to threaten the United States – the first in a string of bellicose statements as the two sides engaged in a war of words.

David Wright, a physicist with the Union of Concerned Scientists, said the missile flew at a standard trajectory, rather than at a steep angle that was done with previous tests to avoid Japanese territory.

“North Korea demonstrated that it could reach Guam with this missile, although the payload the missile was carrying is not known,” he wrote in a blog.

However, he said the missile likely had low accuracy and did not demonstrate an ability to destroy Andersen.

North Korea has test-fired 19 missiles so far this year, including two ICBMs in July, as it steps up the pace of its efforts to develop a nuclear-tipped missile that could reach the U.S. mainland.

It also has carried out six nuclear tests since 2006. The most recent blast on Sept. 3 was also the most powerful, causing landslides and water leakage on the mountain that covered the testing site.

Japan’s Chief Cabinet Secretary Yoshihide Suga told reporters that Friday’s missile flew over Japanese territory for about two minutes and was similar to the one fired on Aug. 29, although that missile flew a shorter distance at about 1,677 miles.

No missile interception was conducted, according to Japanese broadcaster NHK.

South Korea’s president, a liberal leader who took office promising peace but has increasingly been forced to take a hard line, condemned the missile test and said the military will beef up its defense capabilities to deal with the growing threat from the North.

"Dialogue is impossible in a situation like this," Moon said. "International sanctions and pressure will be tightened more so that North Korea will have no choice but to step forward on the path to genuine dialogue."

The U.N. Security Council scheduled an emergency meeting later Friday to discuss the launch at the request of Washington and Tokyo.

Secretary of State Rex Tillerson said the launch “represents the second time the people of Japan, a treaty ally of the United States, have been directly threatened in recent weeks.”

“These continued provocations only deepen North Korea’s diplomatic and economic isolation,” he said in a statement, calling on China and Russia to “take direct actions of their own.”

China and Russia signed onto the new sanctions that were adopted Monday — but only after the U.S. agreed to water down the resolution.

Washington had wanted a full oil embargo against the North, but the final version settled for a cap on oil imports — although the U.S. insisted the sanctions were still the "toughest-ever."

The resolution was passed after North Korea conducted its sixth and most powerful nuclear test on Sept. 3.