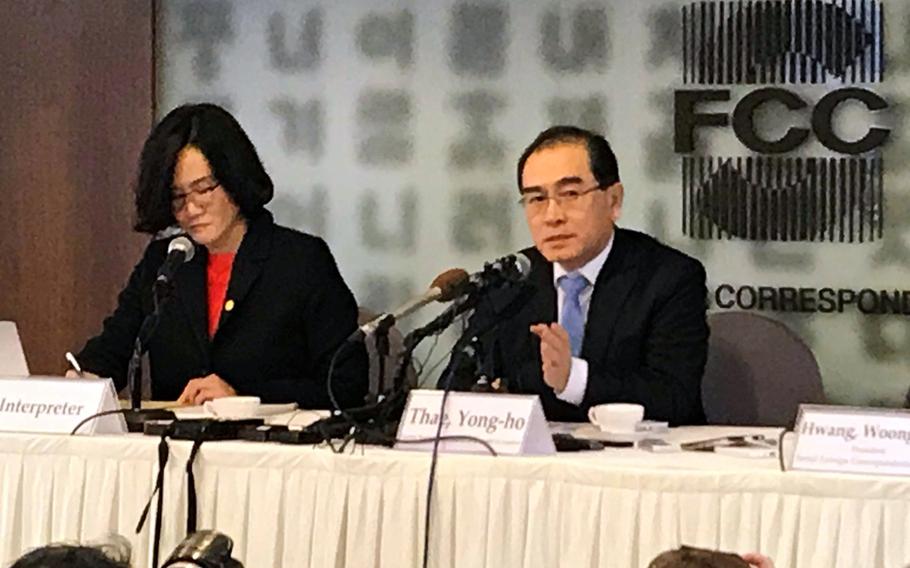 SEOUL, South Korea — North Korean leader Kim Jong Un will never give up nuclear weapons but may agree to reduce production facilities in exchange for sanctions relief during his upcoming summit with President Donald Trump, a prominent defector said Tuesday.

Thae Yong Ho, one of the most senior diplomats to flee the communist state, said Kim’s strategy is to persuade Trump to essentially accept North Korea as a de facto nuclear power.

“If you take out nuclear weapons, what else do they have, nothing,” he said at a news conference in Seoul, adding that the regime sees them as essential to its survival.

“They are trying to tip the extremely uneven scale when it comes to conventional weapons compared with the United States and South Korea,” he added. “No one in the world can persuade North Korea to give up its nuclear weapons.”

He said the bellicose rhetoric in the months before nuclear talks began early last year was part of that effort, but he insisted Pyongyang never intended to go to war.

North Korea will expect to see a partial easing of international sanctions during the Feb. 27-28 summit in Vietnam, Thae said.

In return, the North may agree to dismantle its Yongbyon nuclear material production facility and to destroy intercontinental ballistic missiles, he said.

The U.S. administration has insisted that it will maintain punishing economic sanctions until the final, fully verified denuclearization of the Korean Peninsula is achieved.

But it also is under tremendous pressure to achieve concrete results in Vietnam after widespread criticism that the first U.S.-North Korean summit in Singapore ended with only vague promises.

Thae warned that the second meeting between the two men in less than a year will be a failure if Trump does not persuade Kim to agree to complete denuclearization and return to key treaties that were abandoned when previous talks collapsed more than a decade ago.

“If the U.S. is really trying to achieve the complete denuclearization on the Korean Peninsula then it needs to first require the North Korean leader to get rid of nuclear weapons and to promise to return to the non-proliferation treaty and the International Atomic Energy Agency,” Thae said.

He said a promise to dismantle the North’s nuclear material production facility at Yongbyon would be a small prize, comparing it to “lifting sanctions without any concrete measures from North Korea.”

The Soviet-era plant was also at the center of past failed negotiations. Thae said the complex now has more than 390 facilities that would have to be inspected and verified, which means the process would almost certainly not be finished before the end of Trump’s first term.

He also said any pledge to dismantle ICBMs would be limited because the international community doesn’t have a complete tally of the weapons that could target the U.S. mainland.

A series of missile and nuclear tests, including the test-firing of ICBMs toward Japan, in 2017 raised fears that the divided peninsula was on the brink of a nuclear war.

Trump has frequently touted the suspension of those tests as a measure of success since his administration began new talks with the North Koreans last year.

But Thae said the moratorium was possible because the North Koreans already had made strong progress.

He also said that Yongbyon and the main nuclear testing facility at Punggye-ri were on the table because they had already served their purpose.

“They’ve already come very close to their end of life,” he said.

Thae was a senior diplomat at North Korea’s embassy in London when he defected to South Korea in 2016. Since then, he has been very vocal in his criticism of the regime.

But he reversed his call for Jo Song Gil, an old colleague who went missing from North Korea’s embassy in Italy in November, to defect to South Korea.

Thae said Tuesday that he had confirmed via a contact in North Korea that Jo’s daughter had been repatriated and was in the government’s custody.

Italian media have reported that Jo has sought asylum in the United States.

“I was lucky enough to bring all my family out safely to South Korea, but now that I found out for a fact that his daughter is in North Korea, then I cannot demand or plead with Cho to come to South Korea,” he said.