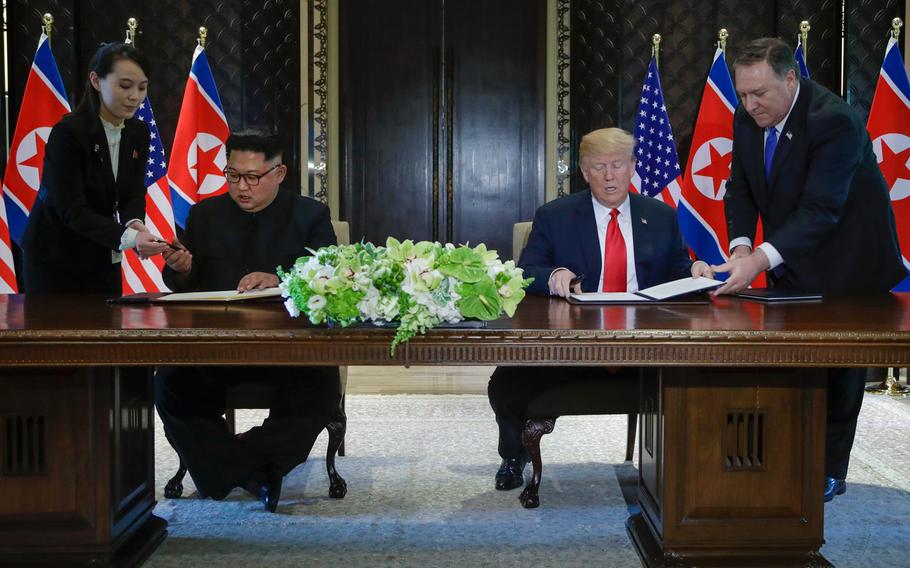 SINGAPORE — President Donald Trump and North Korean leader Kim Jong Un signed a document Tuesday and Kim promised “to leave the past behind” as they wrapped up an unprecedented summit aimed at staving off the threat of nuclear war.

Trump didn’t give details about what was signed but described it as a “pretty comprehensive document” and said the meeting had gone “far better than anybody had predicted.”

He promised to say more at a press conference later Tuesday, adding that he would “absolutely” invite Kim to the White House. Kim, who until April had not left his country since taking power after his father died of a heart attack in 2011, called the document historic.

“We had a historic meeting and decided to leave the past behind,” he declared. “The world will see a major change.”

The lofty promises capped a day of carefully choreographed meetings starting with a handshake in front of a row of alternating American and North Korean flags at the Capella Hotel on Singapore’s Sentosa Island.

The world was watching as they smiled for the cameras, then sat down to make brief remarks before going into a some 40-minute private meeting, with only translators present. Trump, who is seeking to persuade Kim to abandon his nuclear weapons program, called it “my honor” as he became the first sitting U.S. president to sit down with a North Korean leader.

“I feel really great. We’re going to have a great discussion and I think … it will be tremendously successful,” he said. “We will have a terrific relationship. I have no doubt.”

Kim referred to the decades of hostility that preceded the landmark meeting. The two countries remain technically at war after the 1950-53 Korean War ended in an armistice instead of a peace treaty.

“It was not easy to get here,” he said. “There were obstacles, but we overcame them to be here.”

The leaders were later joined by their senior advisers for bilateral talks, with Secretary of State Mike Pompeo and National Security Adviser John Bolton sitting to the left of Trump.

Then then had a working lunch, with beef short ribs, sour crispy pork and braised codfish on the menu. The two men emerged from the hotel before heading to what Trump described as “a signing.”

“We had a really fantastic meeting. A lot of progress,” the president told photographers waiting outside. “I think better than anybody could have expected. Top of the line.”

Trump is hoping to make a legacy-defining deal that some say could earn him a Nobel Peace Prize. He has said he would size up Kim “within the first minute” of their meeting.

But he also has called the summit the start of a process, lowering expectations for a breakthrough and suggesting the meeting would lay the framework for further negotiations.

The White House declared Monday that the talks “have moved more quickly than expected” and said Trump planned to depart later Tuesday, earlier than had been expected.

“At the conclusion of the summit, President Trump will participate in a media availability before departing tomorrow at approximately 8 p.m. for the United States,” the White House said.

Kim also was expected to fly back to Pyongyang after the talks.

South Korean President Moon Jae-in, who has played matchmaker in recent months and held his own summit with Kim in April, delayed a weekly Cabinet meeting to watch the historic handshake.

“The North Korea-U.S. summit has now just begun,” he said, according to a transcript from his office. “Probably, all the attention of our people is on Singapore.”

“I, too, could hardly sleep last night,” he added. “I join all the people in ardently aspiring for the success of the summit to bring complete denuclearization and peace to us.”

Moon, the son of North Korean war refugees, took office last year promising to seek engagement with the North only to be stymied by rising tensions amid a steady drumbeat of North Korean missile tests and saber rattling by Pyongyang and Washington.

The stakes are high, although Trump himself sought to lower expectations for a breakthrough nuclear deal, stressing the meeting was the start of a process that would set the stage for further negotiations.

Pompeo laid out some of the U.S. cards on Monday, saying the administration was sticking to its demand for the complete, verifiable and irreversible denuclearization of the North.

He added that the administration is prepared to provide North Korea with unprecedented security assurances and will ensure that denuclearization “is not something that ends badly for them.”

But experts have expressed doubt that Pyongyang would abandon its hard-won nuclear gains after demonstrating rapid progress in their program with a series of missile and nuclear tests last year.

The Trump administration seeks the complete, verifiable and irreversible dismantling of the North’s nuclear weapons program.

Pyongyang wants a step-by-step approach that would include rewards such as relaxed economic sanctions and security assurances along the way.

Pompeo acknowledged that the North has a track record for making lofty promises in past negotiations only to renege, sometimes years later.

The United States will move to tighten the punishing measures if diplomacy fails, he added.

Pompeo declined to comment on a question about the approximately 28,500 U.S. servicemembers based in South Korea.

Kim, believed to be 34, is the third leader in a family dynasty that has ruled the communist state since it was founded in 1948.

The sight of Kim and Trump smiling and shaking hands was unthinkable just months ago when the two leaders traded personal insults and threats of nuclear war.

Critics say the U.S. administration already has given Kim concessions starting with the summit as the North Koreans have long sought a sit-down with a sitting U.S. president.

Kim, who until this process started had not left his country since assuming power after his father died in 2011, also has emerged as a statesman on the global stage.

He took an evening stroll along the Singapore waterfront on Monday, even stopping to take a selfie with the prime minister of the wealthy city-state.