N. Korea warns US it will face the ‘greatest pain’ after new sanctions adopted 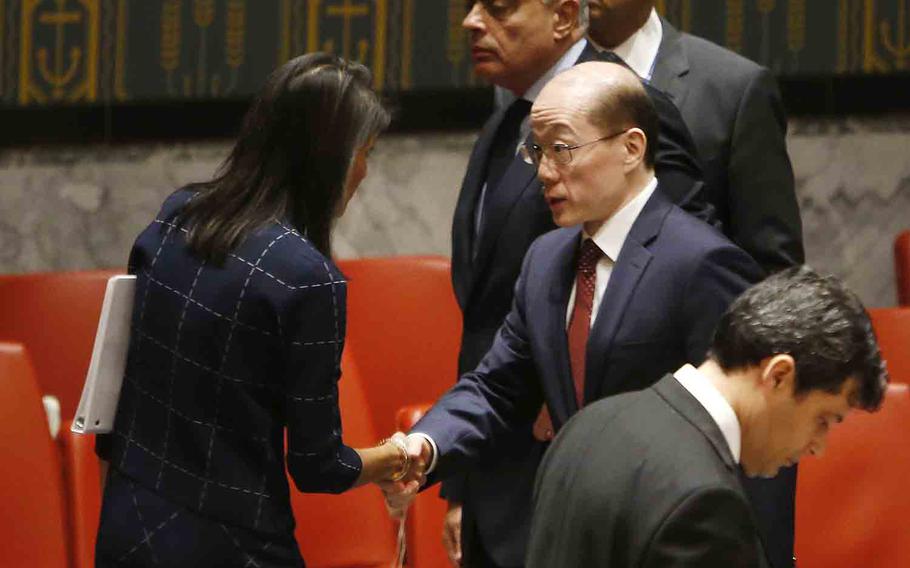 U.S. Ambassador to the United Nations Nikki Haley speaks to China's U.N. Ambassador Liu Jieyi after a vote to adopt a new sanctions resolution against North Korea during a meeting of the U.N. Security Council at U.N. headquarters, Monday, Sept. 11, 2017. (Jason DeCrow/AP)

SEOUL, South Korea — North Korea warned the United States it will face the “greatest pain” after the U.N. Security Council unanimously adopted new sanctions to punish it for conducting a sixth nuclear test.

The resolution approved Monday caps crude oil imports and bans textile exports but fell short of Washington’s hopes for a complete oil embargo due to resistance by veto-holders China and Russia.

But even the watered-down measures were expected to hurt Pyongyang’s sources of foreign revenue and fuel.

Han was quoted as accusing the U.S. administration of being “fired up for political, economic, and military confrontation,” and of being “obsessed with the wild game of reversing (North Korea’s) development of nuclear force which has already reached the completion phase.”

“The forthcoming measures by (North Korea) will make the U.S. suffer the greatest pain it ever experienced in its history,” he said without elaborating.

The communist state issued a similar warning on Monday before the vote was held, ratcheting up already-high tensions over its efforts to develop a nuclear-tipped weapon that could reach the U.S. mainland.

North Korea has made significant progress in its missile and nuclear testing program despite eight previous rounds of sanctions that have been imposed since 2006 when it conducted its first nuclear test.

The U.S. ambassador to the United Nations Nikki Haley said the latest resolution contained “by far the strongest measures ever imposed” and promised “this will cut deep.”

The resolution caps North Korea’s imports of crude oil at the level of the last year and limits the import of refined petroleum products to 2 million barrels a year.

It also bans all textile exports and prohibits any country from authorizing new work permits for North Korean workers – hitting at two major sources of foreign currency for the isolated regime.

“This resolution also puts an end to the regime making money from the 93,000 North Korean citizens it sends overseas to work and heavily taxes,” Haley said. She added the measures would “eventually starve the regime of an additional $500 million or more in annual revenues.”

“The only way for it to get out of diplomatic isolation and economic pressure is to come back to the dialogue table for complete, irreversible and verifiable nuclear dismantlement."

North Korea conducted its sixth and most powerful nuclear test on Sept. 3, building on a series of missile tests over the summer that prompted stern warnings from President Donald Trump and raised fears of a new war.