N. Korea fires most powerful missile yet, claims US mainland now in its sights 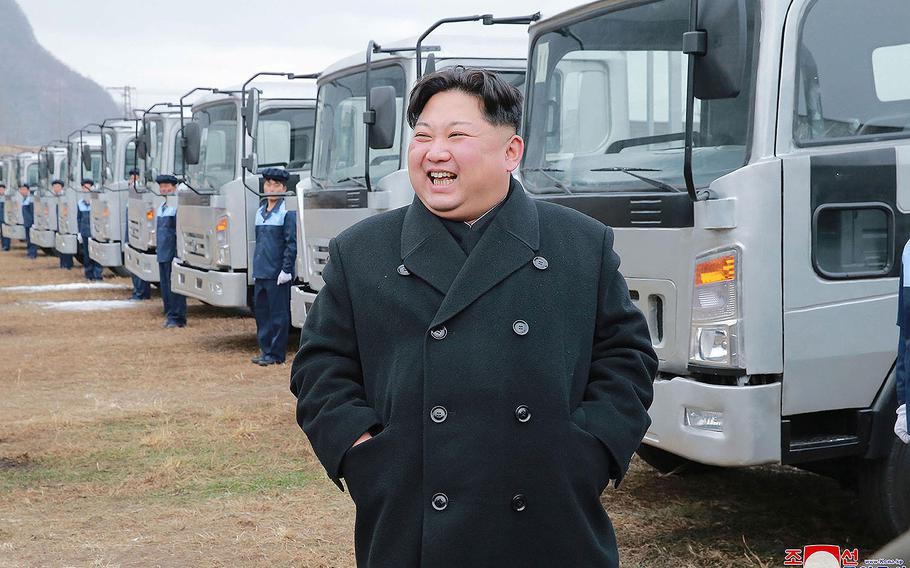 SEOUL, South Korea — North Korea declared Wednesday that it has achieved its long-sought goal of becoming a nuclear power after firing a powerful new missile it said could hit any point in the United States, dealing a new challenge to President Donald Trump.

The launch shattered more than two months of relative calm and came just over a week after Trump put the North back on a list of state sponsors of terrorism. The U.S., South Korea, Japan and the United Nations chief strongly condemned the provocation and urged the North to halt its weapons program.

In recent months, Trump has threatened to unleash “fire and fury” and to “totally destroy” the communist state if needed to defend the homeland or its allies. His tone was more muted after Wednesday’s test.

“I will only tell you that we will take care of it,” the president told reporters at the White House, where he was holding a budget meeting with Republican congressional leaders. “It is a situation that we will handle.”

The intercontinental ballistic missile, which was fired at a steep angle from an area north of Pyongyang, flew for more than 50 minutes. It traveled nearly 600 miles and reached an altitude of up to 2,800 miles before crashing into the sea off the coast of Japan, military officials said.

North Korea gave roughly the same distances, which were farther than ICBMs launched on July 4 and July 28.

“It went higher, frankly, than any previous shot they've taken," Defense Secretary Jim Mattis said at a White House meeting with Trump. “The bottom line is it is a continued effort to build a ballistic missile threat that endangers world peace, regional peace and certainly the United States.”

It was the first missile test since Sept. 15 and sent a clear message of defiance against Trump’s campaign to isolate the regime by punishing it with tough economic sanctions and pressuring its main ally, China, to withdraw its support.

She read a government statement claiming the new Hwasong-15 had improved on capabilities demonstrated by two ICBMs launched in July and could be armed with a “super-large heavy nuclear warhead” that could strike the “whole U.S. mainland.”

She also said North Korean leader Kim Jong Un, whom Trump has mocked as “little rocket man,” had observed the launch and “declared with pride that now we have finally realized the great historic cause of completing the state nuclear force, the cause of building a rocket power.”

The North also reiterated its insistence that its aim is to defend its sovereignty and territorial integrity from “U.S. imperialists.”

Unlike past years when Pyongyang was usually believed to be exaggerating its claims of advances, experts agreed it has made surprisingly swift progress toward its goal of developing a nuclear-capable missile that could target the U.S. mainland.

The communist state already is believed to have the ability to strike South Korea and U.S. bases elsewhere in the region with an arsenal of conventional weapons and tens of thousands of soldiers massed near the heavily fortified border that divides the peninsula.

David Wright, an arms-control expert with the Union of Concerned Scientists, said the results from Wednesday’s test suggested that the missile would have a range of more than 8,100 miles if fired on a standard trajectory.

“Such a missile would have more than enough range to reach Washington, D.C., and in fact any part of the continental United States,” he said in a statement.

However, he said it was likely the North Koreans used a mock warhead that was lighter than the real thing to increase the range.

“If true, that means it would be incapable of carrying a nuclear warhead to this long distance, since such a warhead would be much heavier,” he said.

Kim Tae-woo, a military studies professor at South Korea’s Konyang University, said the North Koreans appear to have mastered the technology needed to attack the U.S., but he doesn’t believe they will do so.

“This is kind of a game, brinkmanship diplomacy. That doesn’t mean that North Korea is ready to go to war against a superpower,” he said in a telephone interview. “North Korea in fact wants to acquire a lot of concessions from the U.S.”

The adversaries have been locked in a standoff since the North Koreans began pursuing nuclear weapons after the 1950-53 Korean War ended in an armistice instead of a peace treaty.

Washington insists it will never accept the North as a nuclear power while Pyongyang maintains its nuclear program is not up for negotiation.

However, U.S. officials have suggested the idea of direct talks with North Korea if it showed restraint. Secretary of State Rex Tillerson strongly condemned the launch but said in a statement that “diplomatic options remain viable and open, for now.”

Key U.S. ally South Korea responded by firing from a land-based missile battery off the peninsula’s east coast along with strikes from a fighter jet and a navy destroyer minutes after the North Korean missile took flight.

“This training shows that our military is watching North Korea’s military trends 24 hours a day and … can strike precisely anytime on the ground, at sea and in the air in case of provocations,” the military said on its Facebook page.

South Korean President Moon Jae-in, meanwhile, warned the government won’t tolerate such provocations and urged the North to return to dialogue as he convened an emergency National Security Council meeting.

He also told officials to try to prevent any negative effect on the Olympics, which begin on Feb. 9 in the South Korean resort area of Pyeongchang, just 50 miles south of the border. The International Olympic Committee has promised the games will be safe amid concern that security fears may hurt attendance.

Moon, who has pursued a policy of engagement with the North and vowed never to allow another war on the divided peninsula, also expressed concern that the growing threat from the North may cause Trump to strike militarily.

“If North Korea completes a ballistic missile that could travel from one continent to another, the situation could spiral out of control,” he said, according to a transcript provided by his office.

U.S. and Japanese officials had been expecting another test since radio signals indicated the North Koreans were preparing for a launch, but the timing just a few hours after midnight local time took many surprise.

Japan tracked the missile but didn’t try to destroy it or initiate a public-warning system because there was no imminent threat to the population or territory, said Chief Cabinet Secretary Yoshihide Suga. He added that no damage to ships or airplanes had been reported.

North Korea had accelerated its nuclear weapons program, launching about 20 missiles earlier this year, including one it said could have reached the United States.

On Sept. 3, the North detonated what was widely believed to be a hydrogen bomb and has threatened to conduct a test over the Pacific.

But it suspended those tests in September after a missile flew over Japan’s Hokkaido Island on Sept. 15.