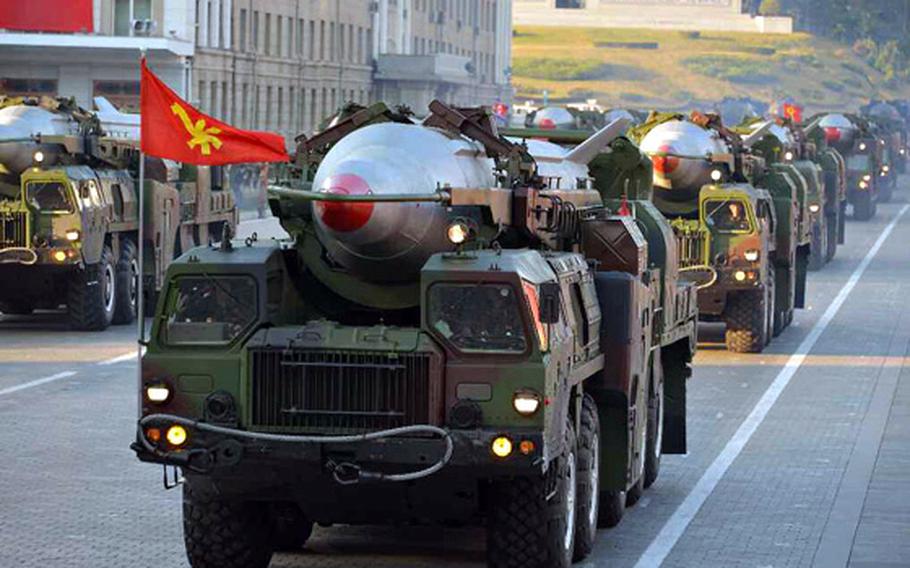 SEOUL, South Korea – North Korea fired a ballistic missile that flew about 620 miles high on Wednesday, officials said, a major step in the reclusive nation’s bid to develop a weapon that can reach U.S. bases in the Pacific.

The test marked significant technical progress after the failure of five previous efforts to launch a midrange Musudan missile over the past two months, including one earlier Wednesday. That missile broke up in the air after flying about 93 miles, the South Korean news agency Yonhap reported, citing unidentified military sources.

South Korea’s Joint Chiefs of Staff said the first missile was fired at 5:58 a.m. from the Wonsan rocket facility on North Korea’s east coast and was presumed to have failed. The second was fired at 8:05 and traveled 250 miles, the military said.

It declined to provide more details or deem the test a success or failure pending further analysis. Most previous missiles have exploded in midair or crashed shortly after being fired.

Japan’s Defense Ministry said a radar analysis showed that the second missile reached an altitude of at least 620 miles, according to The Associated Press. South Korean officials did not immediately confirm that.

Jeffrey Lewis, of the Middlebury Institute of International Studies at Monterey, Calif., said the altitude would be significant because it means the missile would have flown to its full range if fired on a normal trajectory.

“If true, then North Korea successfully tested the propulsion system,” he said in an email. “It’s clear that North Korea’s rocketeers are under enormous pressure to demonstrate the Musudan.”

The missile tests came amid heightened tensions over the North’s refusal to give up its nuclear ambitions, despite international condemnation and harsh U.N. sanctions imposed after a fourth atomic test in January.

The U.S. Strategic Command in Hawaii said that its systems detected and tracked the two suspected missiles, which fell into the Sea of Japan.

“We urge North Korea to refrain from provocative actions that aggravate tensions and instead focus on fulfilling its international obligations and commitments,” it said.

“The situation on the Korean peninsula is very complex and sensitive,” she was quoted as saying by Yonhap.

The Musudan is an intermediate-range ballistic missile that is believed to be able to reach Japan and the U.S. territory of Guam.

One was displayed during a military parade in 2010 in the North Korean capital of Pyongyang, but it had never been flight-tested before three attempts in April and one on May 31. Experts say it is unusual to have so many attempts in a relatively short period of time, but say the North Koreans appear to be learning from mistakes and making technical progress.

Maj. Gen. Chang Ryong Choi, commander of South Korea’s 1st Marine Division, said the North may be seeking a bargaining chip for potential talks on its nuclear program in the future.

“I believe it’s more of a threat because the fact that they’re conducting a number of experiments gives them opportunities for a success,” he said in an interview at the division headquarters in the southeastern city of Pohang.

North Korean leader Kim Jong Un has vowed to persist with his nuclear weapons program after the North staged its fourth atomic test in January. He also has called for military talks with the South, but Seoul has called the overtures insincere and insists it will not engage until North Korea abandons its nuclear program.

The U.S.-based Institute for Science and International Security estimated recently that North Korea has as many as 21 nuclear weapons in its arsenal. But Pyongyang has yet to develop a missile that can deliver the warheads to its stated goal of the U.S. mainland.