N. Korea could thrive like Vietnam if it gives up its nukes, Trump says This photo from the Korean Central News Agency shows North Korean leader Kim Jong Un meeting with his advisers at a hotel in Hanoi, Vietnam, Tuesday, Feb. 26, 2019, on the eve of his two-day summit with President Donald Trump. (Courtesy of KCNA)

This photo from the Korean Central News Agency shows North Korean leader Kim Jong Un meeting with his advisers at a hotel in Hanoi, Vietnam, Tuesday, Feb. 26, 2019, on the eve of his two-day summit with President Donald Trump. (Courtesy of KCNA) A motorcyclist waves American and North Korean flags on a street in Hanoi, Vietnam, Wednesday, Feb. 27, 2019. (Kim Gamel/Stars and Stripes) 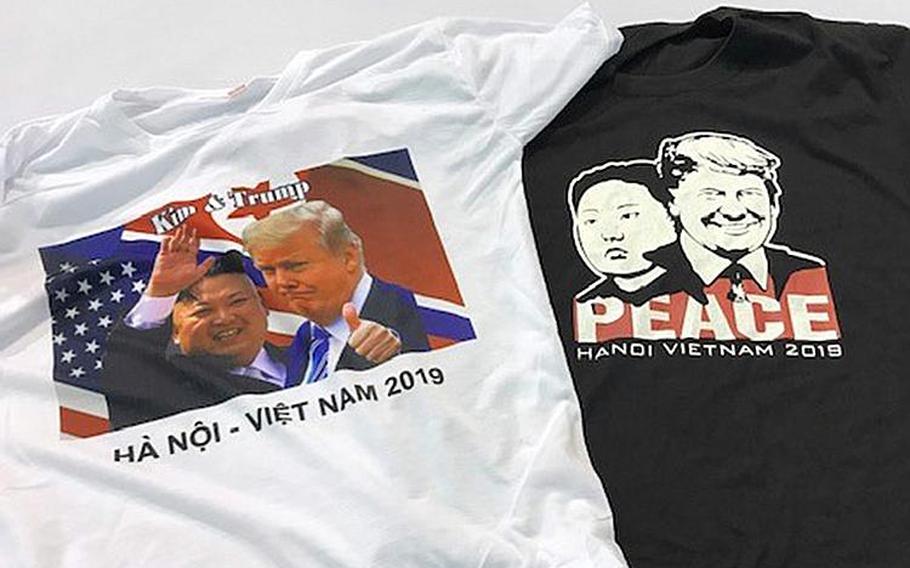 HANOI, Vietnam — North Korea could thrive like Vietnam if it agrees to give up its nuclear weapons, President Donald Trump said Wednesday hours before he is due to meet with Kim Jong Un for their second summit in less than a year.

The president has frequently touted economic prosperity as an incentive for the North to denuclearize, dangling the possibility of sanctions relief and foreign investment in exchange for denuclearization.

He noted Wednesday that summit host Vietnam, a communist country that has successfully implemented economic reforms while maintaining a tight grip on society, could be a model for success.

“Vietnam is thriving like few places on Earth. North Korea would be the same, and very quickly, if it would denuclearize,” Trump tweeted before beginning a morning of meetings with Vietnamese officials.

“The potential is AWESOME, a great opportunity, like almost none other in history, for my friend Kim Jong Un. We will know fairly soon - Very Interesting!” he added.

Trump and Kim arrived in Hanoi on Tuesday after long journeys, including a 20-hour plane ride for the president and a 65-hour trip in an armored train and limousine for Kim.

They were scheduled to begin the two-day summit with a private one-on-one meeting followed by what’s being called a “social dinner” that includes their delegations.

The two leaders were then expected to hold more in-depth talks on Thursday, likely to be followed by a press conference.

Trump and Kim first met on June 12 in Singapore, an unprecedented summit between the countries, which have been enemies since the 1950-53 Korean War.

But talks over how to implement that agreement stalled, raising skepticism over the North’s willingness to relinquish its hard-won nukes.

Trump is under pressure to achieve concrete commitments from Kim, who has promised to dismantle his country’s main nuclear material production facility at Yongbyon in exchange for “corresponding measures” from the United States.

The president hasn’t revealed what he may put on the table at the Hanoi summit, but officials and experts say a possible concession could be an agreement to open liaison offices between the two countries, which don’t have diplomatic relations.

Trump also may agree to a declaration symbolically ending the war, which concluded with an armistice instead of a peace treaty.

The president also may press for more progress in recovering the remains of war dead as that effort also has slowed after a high-profile return of 55 boxes of bones believed to be of American soldiers.

The U.S. administration has insisted it won’t relax sanctions until it sees fully verified denuclearization, but some officials suggested that Washington could agree to further exemptions that would allow inter-Korean economic projects to move forward.

North Korea observers expressed concern that Trump may give away too much without requiring Pyongyang to agree to the long-sought U.S. goal of verifiable denuclearization.

Olivia Enos, a policy analyst at the Heritage Foundation’s Asian studies center, said she was most concerned about the possibility of a peace declaration and offering economic investment in exchange for the Yongbyon dismantlement.

“I think these both lead to an undermining of the pressure strategy, which has not achieved maximum pressure, not even close,” Enos said in an interview.

She said the peace declaration would be “coming at the wrong time” and could further chip away at the U.S.-South Korean alliance, which already has been hit by differences over cost-sharing and the approach to dealing with the North.

“I think a peace declaration, while certainly not the same as a peace treaty, kicks the can down the road in a direction where we’re potentially removing troops from the peninsula,” Enos said.

Trump also should seize the opportunity to address human-rights abuses by North Korea, which so far have not been part of the talks between the two countries, Enos said.

Trump is eager for a diplomatic success to offset political turmoil at home. He has praised North Korea for steps already taken, including the cessation of nuclear and missile tests that had raised fears of a new conflict on the divided peninsula.

The Vietnamese capital, meanwhile, was enjoying the attention brought by the summit. Men and women on the ubiquitous motorcycles that fill the streets pulled over to stores to buy North Korean and American flags.

Storekeepers did a brisk business peddling summit T-shirts emblazoned with photos of Trump and Kim together.

The Southeast Asian nation emerged from two decades of war, which ended in 1975, to become an economic success story.

But North Korea was not likely to see it as a model, according to Victor Cha of the Washington, D.C.-based Center for Strategic and International Studies.

“Good point but not likely to resonate,” Cha tweeted in response to Trump. “North Korea does not like to be compared with a ‘small’ Southeast Asian country.”

Vietnam has a population of nearly 100 million, four times that of North Korea, but Pyongyang considers itself more “developed,” Cha wrote.