N. Korea could have working ICBM by early next decade 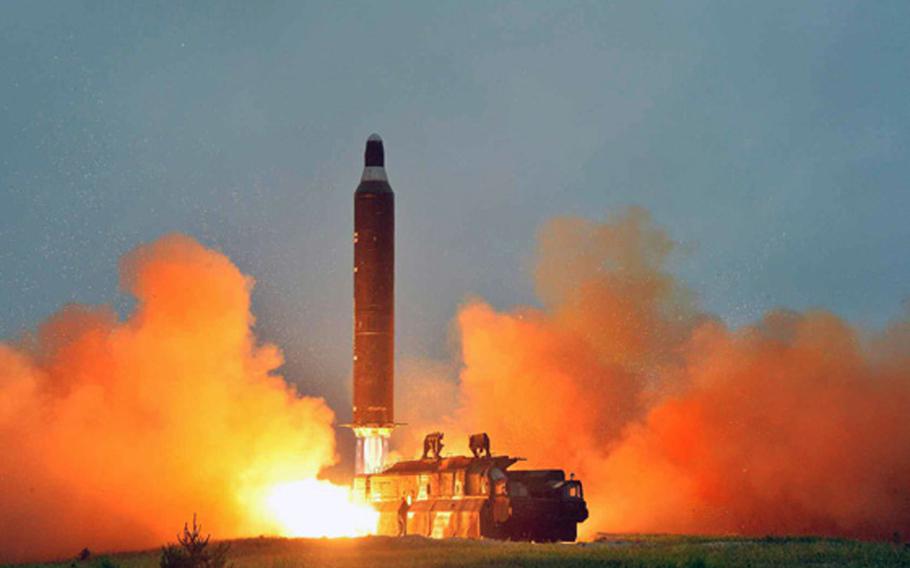 SEOUL, South Korea — North Korea’s missile launch was a “partial success” that suggests the provocative country could have a road-mobile ICBM capable of reaching the U.S. mainland by early next decade, a U.S. think tank says.

After failing in four previous tries, the North fired back-to-back Musudan missiles in just over two hours Wednesday. The first was considered another failure, but the second flew 620 to 880 miles high before falling into the Sea of Japan.

The actual distance traveled — 250 miles — was well short of its potential range that would put it within range of Japan and U.S. bases in the region. Experts said the missile was fired at a high angle to avoid provoking Japan, but the ability to achieve that altitude shows that the North Koreans are making technical progress.

The U.S.-Korea Institute at Johns Hopkins University, in its 38north.org blog, called the test a “partial success.” But it noted that six tests since mid-April despite repeated failures suggest the Musudan is not the North’s long-term focus.

“This isn’t so much an engineering program so much as an exercise in tossing a coin or rolling a die until it comes up with the result they like,” analyst John Schilling wrote in Thursday’s post.

However, he said, it was the first time the Musudan’s engine, which is shared by North Korea’s intercontinental ballistic missiles, was flight tested. Previous tests either crashed or exploded prematurely.

“This partial success increases the likelihood that North Korea’s KN-08 and KN-14 road-mobile intercontinental ballistic missiles (ICBMs) will reach operational status early in the next decade,” he said. “We still don’t expect them to have those missiles operational before 2020, but early flight testing by that date is increasingly likely,” he added.

The tests raised already-high tensions over the North’s refusal to give up its nuclear ambitions, despite international condemnation and harsh U.N. sanctions imposed after a fourth atomic test in January. In response, the U.S. and South Korea have begun discussing the deployment of an advanced missile defense system known as THAAD.

Han also said Seoul is bracing for another “provocation” by North Korea and was expediting the development of its own air and missile defense system.

"We do not rule out the possibility of an additional nuclear test by North Korea," he was quoted as saying by the Yonhap news agency.

The U.N. Security Council strongly condemned the launches and called on member states to redouble efforts to fully implement the sanctions.

North Korean leader Kim Jong Un personally observed the launch and boasted about the missile’s range. “We have the sure capability to attack in an overall and practical way the Americans in the Pacific operation theatre,” he said.

The top North Korean official for U.S. relations has told The Associated Press that his country is now a nuclear threat to be reckoned with, and Washington can expect more nuclear tests and missile launches like the ones earlier this week as long as it attempts to force his government's collapse through a policy of pressure and punishment.

Han Song Ryol, head of the department of U.S. affairs at North Korea's Foreign Ministry, blamed the current situation on the United States, saying it needs to stop its military threats, sanctions and economic pressure.

"Without doing so, it's like they are telling us to reconcile while they are putting a gun to our forehead," he said.