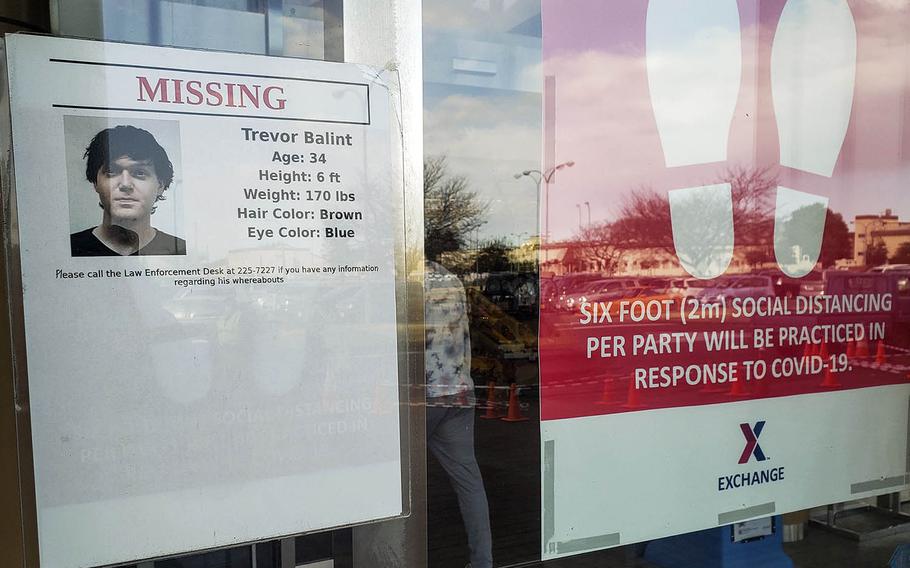 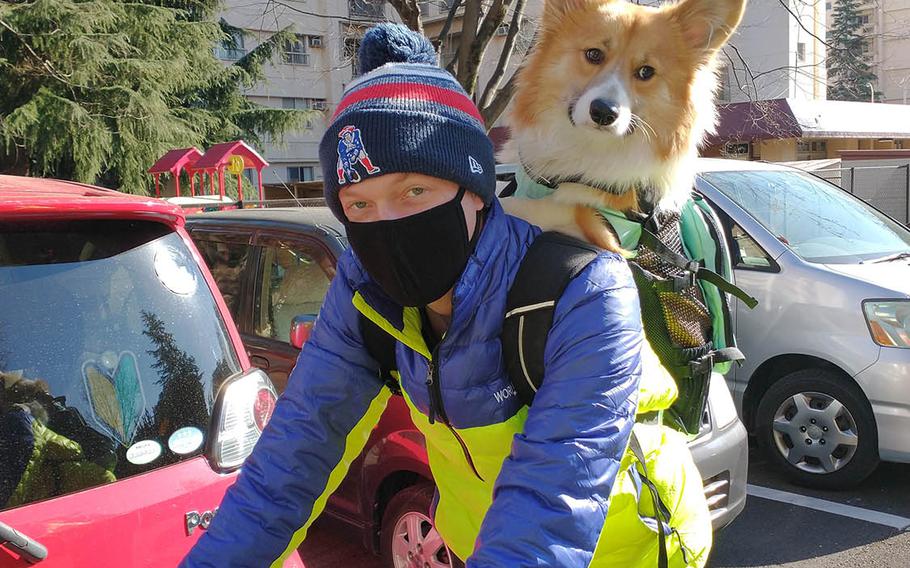 Trevor Balint, 34, poses for a photo with his corgi, Mr. Waffles, in this undated photo taken at Yokota Air Base, Japan. Balint was reported missing Feb. 1, 2021. (Britni Balint) Trevor and Britni Balint pose together in an undated photo. Trevor, 34, was reported missing from Yokota Air Base, Japan. Feb. 1, 2021. (Britni Balint)

YOKOTA AIR BASE, Japan — The wife of a former substitute teacher who vanished a week ago from the home of U.S. Forces Japan in western Tokyo is appealing to the military community for help with the search.

Trevor Balint, 34, the spouse of a civilian Defense Department computer programmer, was reported missing Feb. 1. He is 6 feet tall, 170 pounds, with blue eyes and brown hair.

Balint worked as a Department of Defense Education Activity substitute teacher until Nov. 18, DODEA-Pacific spokeswoman Miranda Ferguson confirmed in an email Tuesday. Ferguson, who initially described Balint as an active DODEA substitute, wrote that his employment ended at his request. Balint taught high school chemistry and physics, according to his LinkedIn profile.

Investigators searched parts of the base last week but haven’t reported new leads. On Saturday, his wife, Britni Balint, posted a plea for help on the Yokota Spouses & Families Facebook group.

“Please continue to help search for Trevor — including reporting any sightings you may have had in the hours leading up to his disappearance — anything since the morning of Sunday January 31st,” she wrote.

Britni, 31, said she’s posted dozens of fliers with her missing husband’s photograph around Yokota and in nearby areas and appealed, in her Facebook post, for help hanging more. A Facebook group about the search for Trevor has also been created.

Air Force investigators have removed Trevor’s possessions, including his laptops, from the couple’s home, which they share with two cats and a corgi, Britni told Stars and Stripes Sunday while walking through Yokota’s east side housing area.

That day, she visited some of the locations that Trevor is thought to have gone in the hours leading up to his disappearance.

On Jan. 31, the couple drank wine in their on-base tower apartment and played a card game called Escape Room with a friend in the U.S. over a video link, Britni said. Trevor was in good spirits, making plans to watch a movie and play more games, she said.

“Nothing about his behavior seemed unusual,” she said.

That evening, Trevor told his wife he was going out at around 8 p.m. to search for a neighbor’s lost cat, which he’d earlier spotted near the base movie theater.

Gate guards report Trevor coming onto the base through its east gate at 9:09 p.m. while carrying a bag from a convenience store and talking on his cellphone, Britni said.

“We have been unable to track who he was talking to – it is nobody in our joint network, which really is the only network that I knew he had,” she said.

Britni said she last saw Trevor when he returned home at 1:30 a.m. Feb. 1 without his jacket.

The couple slept in separate bedrooms and Britni, who went to work the next morning, didn’t realize her husband was missing until she finished work and saw a message from somebody who had found his wallet near a vacant townhome on base, Britni said.

“All the messages I’d sent to Trevor were still marked unread at this point,” she said. “I returned home to find the front door unlocked, but Trevor was not home.”

When Britni went to the vacant home near where the wallet was found, she discovered his jacket, shoes, mask, cellphone, keys and some empty cans of Chuhai – a Japanese alcoholic drink, she said.

Somebody appeared to have reset Trevor’s phone, Britni said.

“At this point, it was Monday evening and it was again starting to get dark and cold. I had no idea where he could possibly be, especially without any of his belongings. I called Security Forces to get assistance,” she said.

Britni said she made a report to the Japanese police on Tuesday, Feb. 2.

A Japanese police spokesman in Fussa city, which borders Yokota’s western side, said local officers brought a dog to search inside the base Feb. 3. Japanese police have no information on where Trevor might have gone, or that he left the base, so they haven’t checked security cameras in the city, he said.

The couple doesn’t have close friends in Japan, Britni said.

“The Yokota community has been very supportive, and I appreciate all of the thoughts and prayers and offers of assistance,” she said.

The couple has been together since high school. They married in 2012 and lived in England while Britni worked at RAF Menwith Hill from October 2016 until June 2019, when they moved to Japan.

Trevor’s mother, Kathy Balint, 57, of Hubbard, Ohio, said she last spoke to her son around Christmas and has contacted the U.S. Embassy in Tokyo seeking help.

“The embassy told me that because they reside on the [Air Force base] that there is not much/anything they can do, it's a military matter,” she said.

Britni’s mother, Denise Simion Mott, 56, of Brookfield, Ohio, said she is seeking an emergency visa to come to Japan to support her daughter.

Trevor holds a Ph.D. in physics from George Washington University as well as a bachelor's in mathematics from Youngstown State University and worked as a data scientist after graduation, Britni said.

“I do not believe he would just jet off to get away or anything of the sort,” she said. “He is a very smart person and would know that others are looking for him and are worried.”