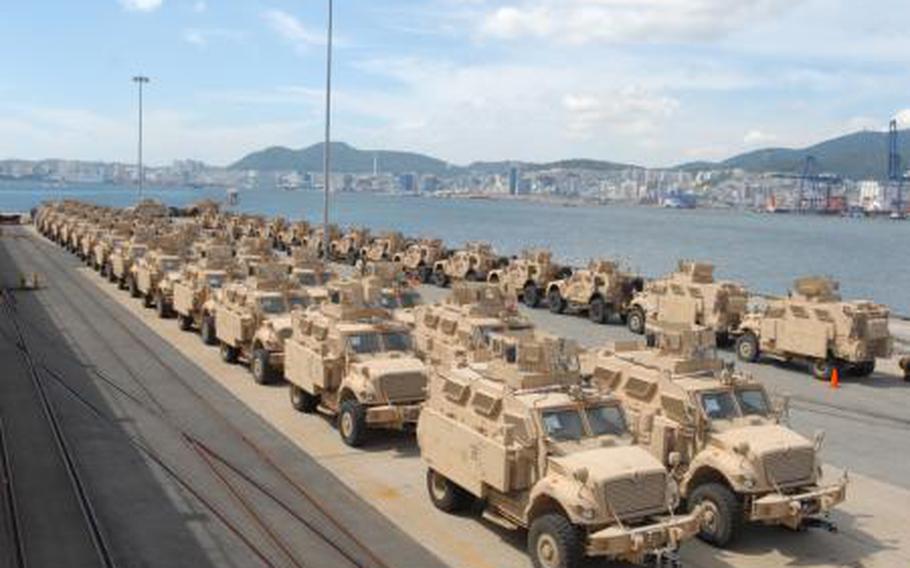 SEOUL — The U.S. Army has decided not to utilize Mine Resistant Ambush Protected vehicles on the Korean peninsula.

Last summer, more than 80 MRAPs – the iconic vehicle of the wars in Iraq and Afghanistan – were brought to South Korea to see how they might be used by American troops here.

However, it was determined that the vehicles were “not suitable for maneuver battalions to use” in Korea, according to a 2nd Infantry Division statement. “There are no plans to add the MRAP vehicle to our fleet in the foreseeable future,” the statement said.

The vehicles have been returned to the Army fleet management system for use in more suitable regions, 2ID said.

With its V-shaped hull, the MRAP was designed to force the blasts from roadside bombs, or landmines, away from the occupied spaces in the vehicles. With death tolls rising in Iraq in 2007, the Pentagon stepped up production of the vehicles, delivering more than 1,500 of them to soldiers. By 2008, soldiers were driving more than 10,000 MRAPs on patrols in Iraq and Afghanistan.

But with the war winding down in Afghanistan, it’s unclear where the MRAPs could best utilized if not in Korea.

Instead, the Army has added a new mine-resistant vehicle to its Korea fleet – the Assault Breacher Vehicle.

“The 2ID remains at the tip of the spear on the Korean peninsula, outfitted with the best soldiers and equipped with the most modern and lethal weapons that exist in the world today,” according to the 2ID statement.

The 70-ton ABV, nicknamed “The Shredder,” is designed to clear paths for troops to advance through minefields or areas where improvised explosive devices might be buried.

ABVs first got extensive use in Afghanistan in 2010 when the U.S. Marines brought them in to help deal with the IEDs, a popular weapon of the Taliban there.

“The Assault Breacher Vehicle is a tracked, combat-(engineered) vehicle designed to provide the capability for deliberate and in-stride breaching of mine fields and complex obstacles for the 1st Heavy Brigade Combat Team,” a 2ID release said.

The 2ID staged a field demonstration of the ABV for the media Wednesday at Rodriguez Range, about 15 miles south of the DMZ. Six so far have been brought to South Korea.

Last summer, the arrival of the MRAPs in South Korea caught the attention of North Korean military leaders, who said there was little question why they were brought to a peninsula, where estimates on the number of land mines buried along the 160-mile long, 2.5-mile-wide DMZ range from the tens of thousands into the millions.

“These vehicles capable of protecting troops aboard from mines or explosives are aimed at safely crossing the Military Demarcation Line before mounting an all-out attack on (the North) once they kick off a war against it,” read a report in the government-controlled Rodong Sinmun newspaper. “(The) forward deployment of such … military hardware is an anachronistic action of disturbing peace and stability in the region.”

Asked if the MRAPs were brought in with the North and DMZ in mind, a 2ID spokesman said at that time only that U.S. military officials wanted to determine whether the MRAPs would enhance their ability, “to preserve peace and deter aggression on the Korean peninsula.”

So far, there has been no North Korean response to the ABVs’ arrival.