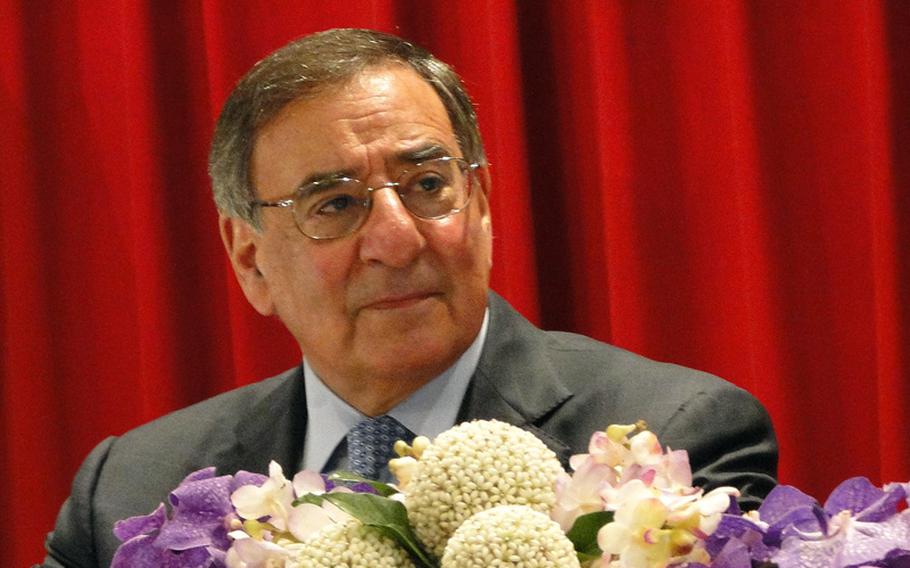 Buy Photo
Secretary of Defense Leon Panetta at press conference at the the Thailand defense ministry on Nov. 15, 2012. (Jennifer Hlad/Stars and Stripes)

BANGKOK &ndash; As more suggestive details trickle out about the private lives of some of America&rsquo;s most respected generals, Defense Secretary Leon Panetta has ordered the Pentagon&rsquo;s top brass to figure out how to keep their officers ethically in line.

The military has recently endured a rising storm of scandals among current and former high-ranking officers, ranging from alleged expense account abuse to adultery to accusations of rape and sexual abuse. Such behavior hurts not only the military but the country, Panetta said.

&ldquo;[W]hen lapses occur, they have the potential to erode public confidence in our leadership and in our system for the enforcement of our high ethical standards,&rdquo; Panetta wrote in a Wednesday memo to Joint Chiefs Chairman Gen. Martin Dempsey. &ldquo;Worse, they can be detrimental to the execution of our mission to defend the American people.&rdquo;

The FBI forwarded the emails -- thousands of pages of correspondence and documents -- to the Pentagon Inspector General. Investigators are combing through them for evidence of any legal wrongdoing, including adultery and potential release of classified information.

NPR reported Thursday, without citing sources, that Kelley may have received classified or other information she wasn&rsquo;t cleared to see from Allen, that investigators worried about a cavalier attitude toward classified information and that more high-ranking officers may be pulled into the scandal.

But so far, there has been no indication of leaks, a defense official speaking on the condition of anonymity said Thursday.

The same official said the Pentagon stands behind its characterization of the emails as &ldquo;inappropriate and flirtatious,&rdquo; but that there was no indication Allen had engaged in an illegal adulterous affair with Kelley.

But other government officials have gone further, telling the New York Times that some emails were &ldquo;sexually explicit.&rdquo; And Fox News has reported that the emails were said to be the &ldquo;equivalent of phone sex over email.&rdquo;

On Tuesday, the Associated Press reported that Allen was warned in an anonymous email in May that Kelley was trouble, and he should put off a meeting he had planned with her in Washington. The FBI would later trace that email to Broadwell, the AP reported, setting off the string of events that led to Petraeus&rsquo; fall and Allen&rsquo;s public shaming.

Allen denies engaging in an affair with Kelley, and a White House spokesman said Tuesday that President Barack Obama had &ldquo;faith&rdquo; in Allen and continued to support him as commander in Afghanistan.

But Allen&rsquo;s confirmation hearing to become the head of U.S. European Command, scheduled for Thursday, has been indefinitely delayed, and Senate Armed Services Committee officials said the change of command would not take place in February as expected.

The revelations about Petraeus and Allen come on the heels of recent reports of senior military officers getting in trouble for ethical lapses or worse.

This week, Army Gen. William &ldquo;Kip&rdquo; Ward, the former leader of U.S. Africa Command, was demoted to the rank of three-star general and asked to pay back tens of thousands of dollars of government money that the DOD Investigator General said Ward improperly spent on personal travel and other expenses.

Army Brig. Gen. Jeffrey Sinclair, former deputy commander for support of the 82nd Airborne Division, is in the midst of an Article 32 hearing about allegations he forced subordinate officers to have sex with him. And at least 20 Navy officers have been relieved of command this year for misconduct.

Still, Panetta said at a Thursday news conference while visiting the Thai capital that recent scandals should not taint the public&rsquo;s perception of America&rsquo;s top commanders.

Asked if Allen&rsquo;s email exchange with Kelley was sexually explicit, Panetta declined to characterize the communication, saying he does not want to affect the investigation.

&ldquo;I have tremendous confidence in Gen. Allen, certainly his ability and his leadership, and I don&rsquo;t think anybody should jump to any conclusions about where any of this will lead,&rdquo; Panetta said.

Although Panetta sent the memo asking Dempsey to work with the Joint Chiefs to review moral and ethical standards among military leaders this week, Pentagon spokesman George Little said the initiative began months before Petraeus&rsquo; resignation from the CIA.

&ldquo;Beyond mere compliance with the rules, I also expect senior officers and civilian executives to exercise sound judgment in their stewardship of government resources and in their personal conduct,&rdquo; Panetta wrote. &ldquo;An action may be legally permissible but neither advisable nor wise.&rdquo;

Panetta has asked Dempsey for recommendations and findings in the next few weeks so he can send an interim report to President Barack Obama by Dec. 1.