More drums dug up near Kadena schools amid pollution scare 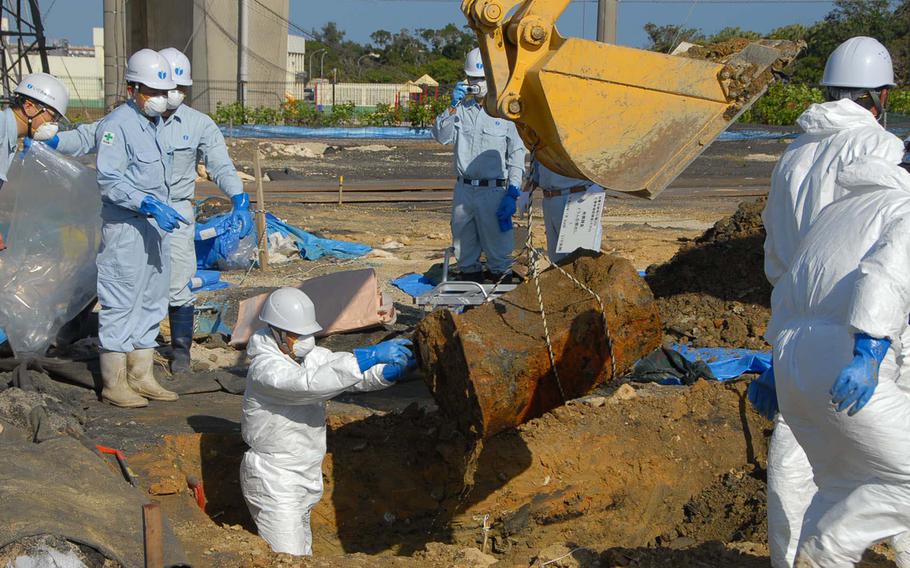 The Amelia Earhart Intermediate School playground is visible in the background, Jan. 28, 2014, as the Japan Ministry of Defense excavated a local soccer field where dioxin and herbicide was recently discovered. (Travis J. Tritten/Stars and Stripes) Inside a plastic-draped tent, Japan Ministry of Defense workers examine a badly rusted drum unearthed Jan. 28, 2014, from a soccer field near Kadena Air Base schools where 22 dioxin- and herbicide-laced barrels were found last year. (Travis J. Tritten/Stars and Stripes) 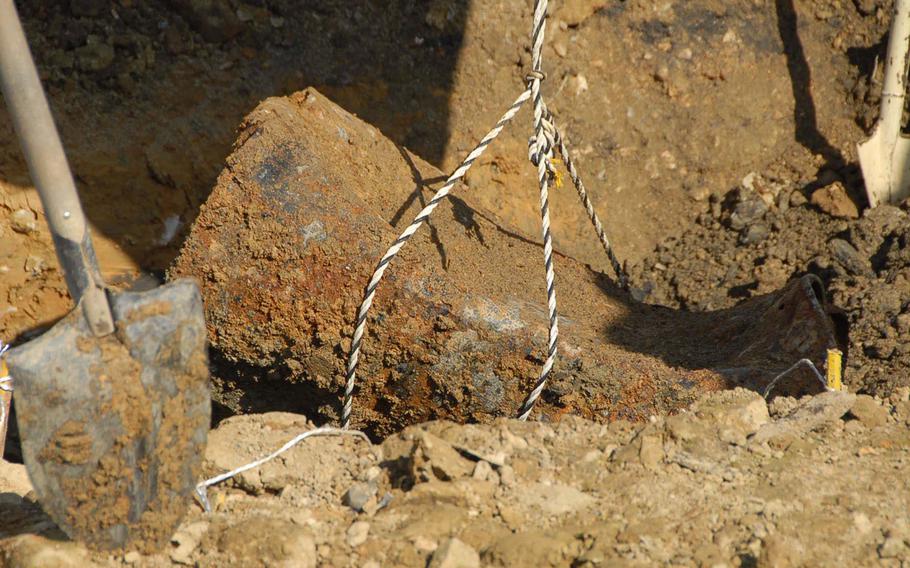 A drum is pulled from the ground with a rope Jan. 28, 2014, as the Japan Ministry of Defense continues to excavate a soccer field next to Kadena Air Base schools where 22 dioxin- and herbicide-laced barrels were found last summer. (Travis J. Tritten/Stars and Stripes)

OKINAWA CITY, Okinawa — The Japan Ministry of Defense on Tuesday began unearthing at least 11 more containers from a soccer field adjacent to Kadena Air Base schools where 22 buried dioxin- and herbicide-tainted drums were discovered last summer.

The ministry will test to determine whether the additional drums also contain traces of pollutants.

Ministry officials also said they hope to confirm the origin of the herbicide of the original drums following public speculation that it could be proof of Agent Orange, an infamous Vietnam-era tactical defoliant the United States has repeatedly said was never present on Okinawa.

The ministry, as well as Okinawa City and the prefectural government, have said the off-base area poses no health risks and that pollutants found on the drums have not spread to the soccer field or surrounding soil and water. The Air Force said Saturday that air and soil tests at the base schools found no pollution danger.

Still, the discovery of dioxin in the drums already unearthed within sight of Amelia Earhart Intermediate School and its playground shocked hundreds of military parents. The 18th Wing announced Tuesday evening at a public town hall meeting that it will commission a new round of soil testing at the school that will be performed by an independent lab in the United States.

During the morning, Japanese workers in white hazmat suits dug in the stripped soccer field and pulled badly rusted, crushed barrels from the ground. The recovery team carefully bagged and moved the containers to an enclosed tent to examine them and collect soil samples.

The ministry said it plans to finish up tests on the newly unearthed drums and a survey of the soccer field by March.

The 22 empty Dow Chemical Co. barrels already recovered were found to contain traces of dioxin, a common pollutant linked to cancer, reproductive and developmental problems, immune system damage and hormone imbalances. Testing also found the herbicide 2,4,5-trichlorophenoxyacetic acid, which was an ingredient in a variety of U.S. commercial defoliants but was discontinued in 1985 because of concerns over dioxin contamination, according to the U.S. Centers for Disease Control and Prevention.

The soccer field land was used by the Air Force until 1986, when it was returned to Okinawa control. The ministry said a beverage bottle, car tire and other materials recovered along with the Dow Chemical drums were dated and traced to the 1980s.

Standard Department of Defense practice until 1988 was to bury spent chemical drums, though the Air Force said it has no records of disposal in that area.

DOD consultant and Agent Orange expert Alvin Young said last year that the 30-gallon Dow drums likely contained maintenance shop and hospital waste and that the dioxin had been created by burnt plastics. Dow, which was a producer of Agent Orange, said it did not use that type of drum for the military defoliant but was unsure what was in the recovered barrels.

The presence of herbicide and dioxin has sparked suspicions that the barrels might have contained Agent Orange, which used the 2,4,5-T herbicide as an ingredient and was known to be contaminated with dioxin.

The military discontinued use of Agent Orange in the early 1970s. Exposure has been blamed for a wide range of serious ailments among veterans. The Department ofVeterans Affairs recognized a wide variety of illnesses associated with Agent Orangeand has granted medical benefits to those who served in Vietnam and Thailand.

Some veterans who served on Okinawa during the Vietnam War have claimed they witnessed the use and burial of Agent Orange on the island. But they have been mostly unable to convince the VA to approve medical claims for exposure.

The United States has said the defoliant was never stored, shipped through or used on Okinawa. A study commissioned by the DOD last year backed the claim.