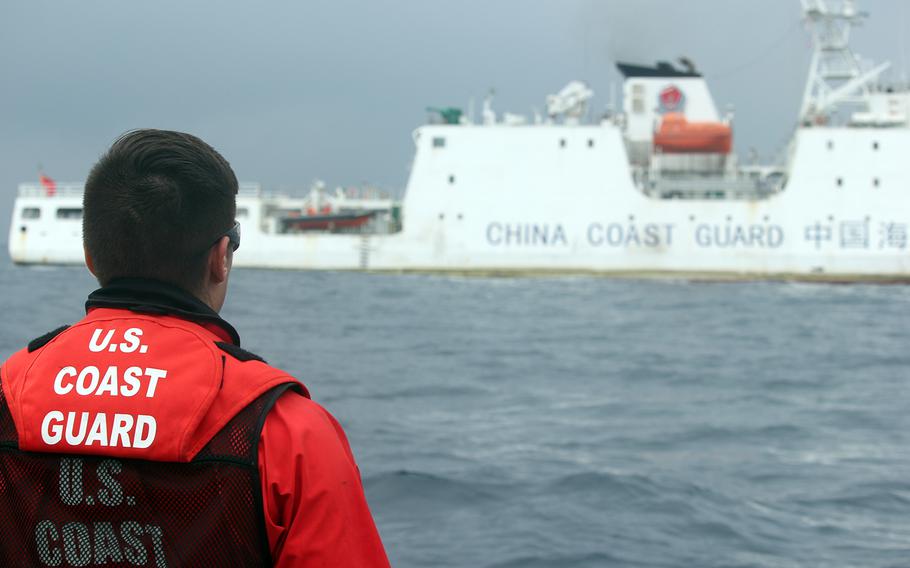 CAMP FOSTER, Okinawa — A group of Chinese vessels entered Japanese territorial waters near the Senkakus – a group of uninhabited islands west of Okinawa in the East China Sea – on Monday, according to the Japanese coast guard.

“Four China Coast Guard vessels entered the territorial waters at about 4 p.m. on Monday and exited by 4:16 p.m.,” a spokesman for Japan’s 11th Regional Coast Guard in Naha told Stars and Stripes on Tuesday morning. The rules of his job do not allow him to be named.

“The Japan Coast Guard warned the vessels to exit the waters and will continue warning them not to enter,” he said.

China Coast Guard vessels were spotted in the Japanese contiguous zone for 64 days straight from April 12 to June 14. The contiguous zone extends past a nation’s territorial waters and up to 24 nautical miles.

“Since the Senkaku Islands became Japanese land in 2012, this is the longest record” for Chinese incursions, the spokesman said.

On June 11, a Chinese aircraft carrier sailed between two islands in Okinawa prefecture, according to Japanese officials.

The carrier Liaoning was part of a six-ship flotilla that passed between the main island of Okinawa and Miyako Island as it made its way from the East China Sea to the open ocean, a spokesman for Japan’s Joint Staff told Stars and Stripes last month.

Japanese officials have been increasingly concerned about Chinese encroachment as Beijing modernizes its military and becomes more assertive in the region.

The number of jets Japan scrambled to intercept Chinese aircraft approaching its airspace rose 27.6 percent to 638 times in fiscal year 2018, according to the nation’s Ministry of Defense.