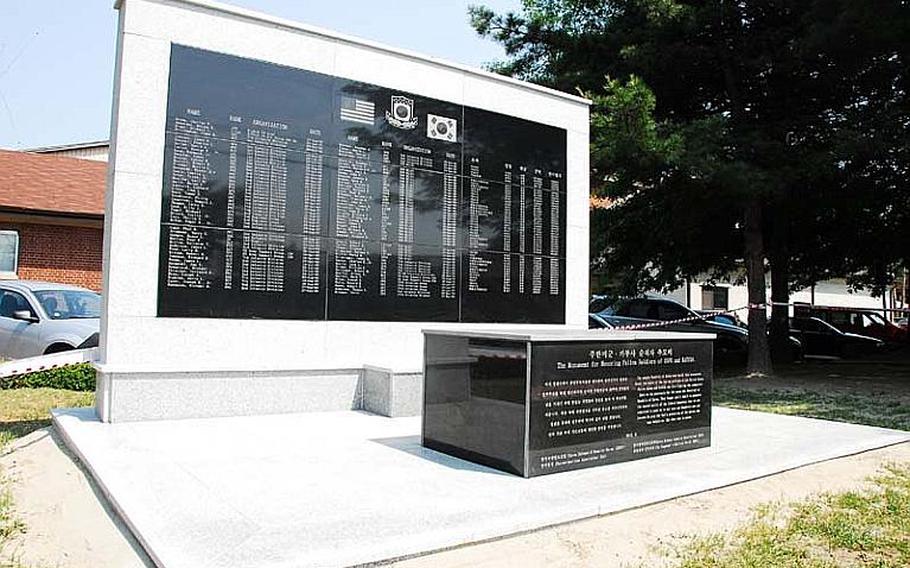 A monument to 130 U.S. and South Korean troops who have been killed in South Korea since the end of the Korean War will be dedicated on June 8, 2012. The monument is located at U.S. Army Garrison Yongsan near the 8th Army Headquarters building. (Ashley Rowland/Stars and Stripes)

SEOUL &mdash; More than 40,000 U.S. servicemembers died or went missing in action during three brutal years of fighting in the Korean War.

A dedication ceremony for a monument at U.S. Army Garrison Yongsan honoring them will be held at 10 a.m. Friday.

&ldquo;There are so many people who died during the Korean War, and lots of monuments to commemorate them all across the country,&rdquo; said Son Min Seok, an official with the Korea Defense and Security Forum, one of four South Korean groups that funded the monument. &ldquo;But there is no monument to remember those who died after the armistice agreement.&rdquo;

The names of approximately 90 U.S. troops and 40 South Korean troops &mdash; all KATUSAs, or Korean Augmentees to the U.S. Army &mdash; are engraved on the monument, along with the message that the South Korean people &ldquo;honor the souls of the fallen soldiers ... who died fighting the communists here on the peninsula for the peace and democracy of Republic of Korea.&rdquo;

The deaths are a reminder of the potential for conflict on the Korean peninsula, where tensions remain high between the North and South. An armistice was signed that ended hostilities, but no peace treaty was drafted and both countries remain technically at war.

Among those listed on the monument are Pfc. Richard Rimer, who was shot multiple times on Oct. 3, 1962, while standing guard at the Demilitarized Zone; and Sgt. 1st Class Thomas L. Anderson, who tripped a mine when his three-man patrol accidentally entered a North Korean sector of the DMZ on Dec. 6, 1979.

The most recent death was that of Chief Warrant Officer 2 David Hilemon, whose helicopter strayed into North Korean airspace and was shot down on Dec. 17, 1994. Many listed on the monument died together, such as the 31 crewmembers of a U.S. Navy reconnaissance aircraft that was shot down on April 15, 1969, over the Sea of Japan by two North Korean MiG fighters.

The monument cost 60 million won, or approximately $51,000, and was also funded by the Korea Defense Industry Association, Yu Yongweon&rsquo;s Military World and the Korean-American Association.

An official with the Korea Defense Industry Association, which paid most of the cost, said he personally believes that the troops have been wrongly forgotten.

&ldquo;Our country didn&rsquo;t do enough to commemorate the people who sacrificed themselves and died in the line of duty for our nation,&rdquo; said the official, speaking on the condition of anonymity. &ldquo;I feel it&rsquo;s important that we need to remember those who nobly sacrificed themselves.&rdquo;