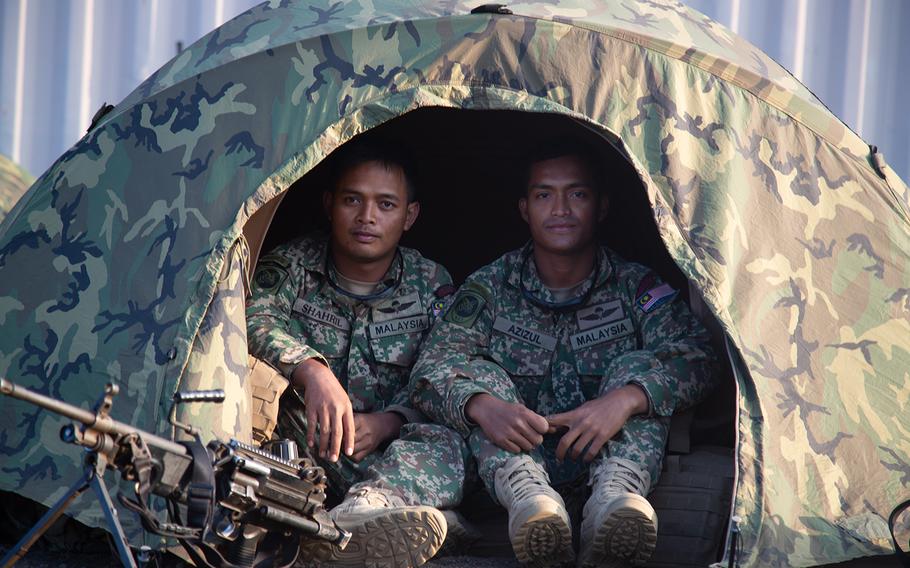 Buy Photo
A pair of Malaysian Marines pose in their tent at Pohakuloa Training Area, Hawaii during the Rim of the Pacific exercise, July 15, 2018. (Marcus Fichtl/Stars and Stripes)

Buy Photo
A pair of Malaysian Marines pose in their tent at Pohakuloa Training Area, Hawaii during the Rim of the Pacific exercise, July 15, 2018. (Marcus Fichtl/Stars and Stripes) 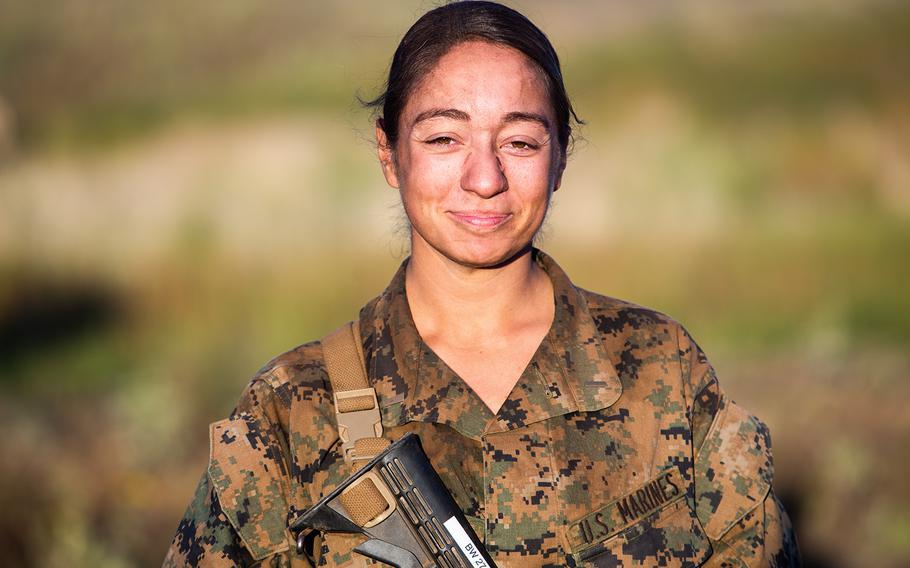 A Marine artillery officer poses at Pohakuloa Training Area, Hawaii during the Rim of the Pacific exercise, July 18, 2018. (Marcus Fichtl/Stars and stripes) Buy Photo
Sailors play UNO aboard the USS Carl Vinson off the coast of Hawaii during the Rim of the Pacific exercise, July 21, 2018. (Marcus Fichtl/Stars and Stripes) Buy Photo
An F/A-18E Super Hornet prepares to take off from the deck of the USS Carl Vinson off the coast of Hawaii during the Rim of the Pacific exercise, July 21, 2018. (Marcus Fichtl/Stars and Stripes) Buy Photo
A sailor makes a phone call aboard the USS Carl Vinson off the coast of Hawaii during the Rim pf the Pacific exercise, July 21, 2018. (Marcus Fichtl/Stars and Stripes) 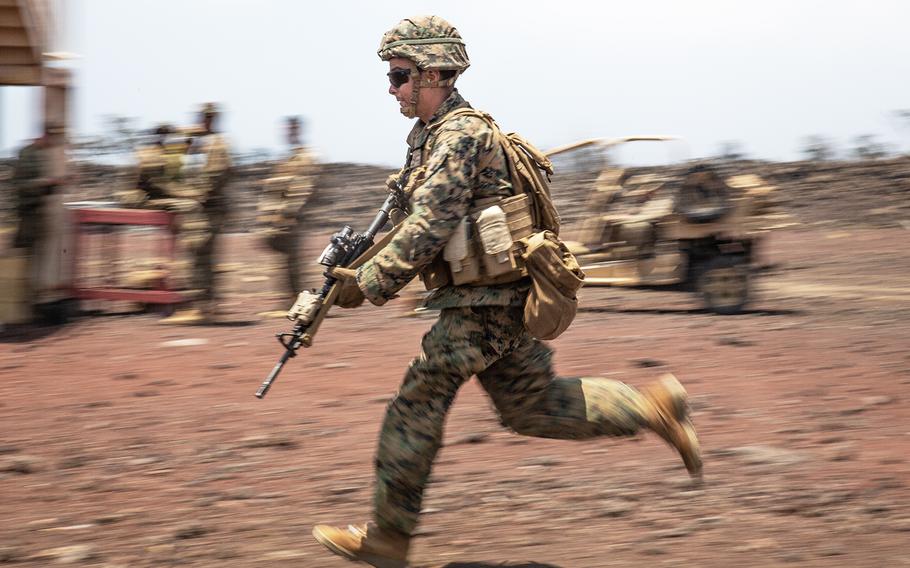 Buy Photo
A Marine runs across a range at Pohakuloa Training Area, Hawaii during the Rim of the Pacific exercise, July 18, 2018. (Marcus Fichtl/Stars and Stripes) 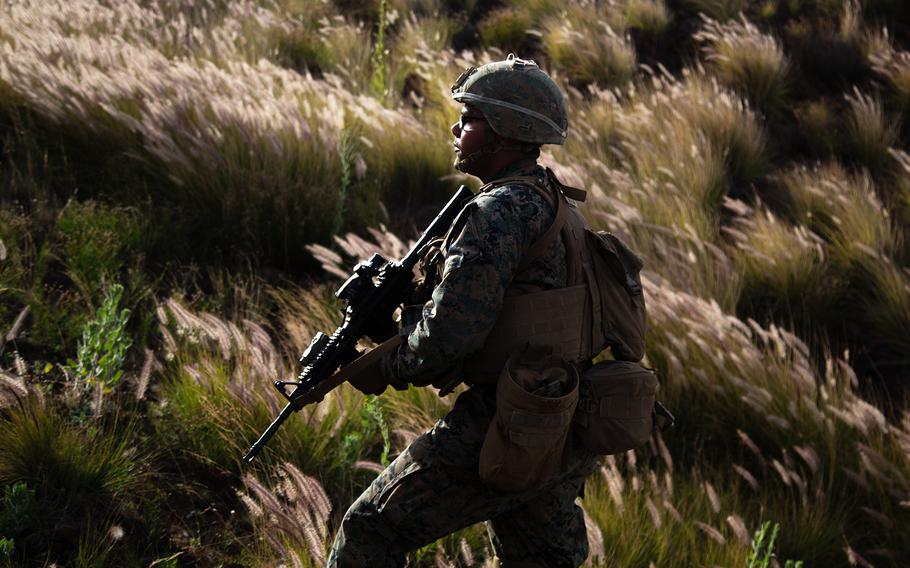 Buy Photo
A Marine patrols a range at Pohakuloa Training Area, Hawaii during the Rim of the Pacific exercise, July 13, 2018. (Marcus Fichtl/Stars and Stripes) 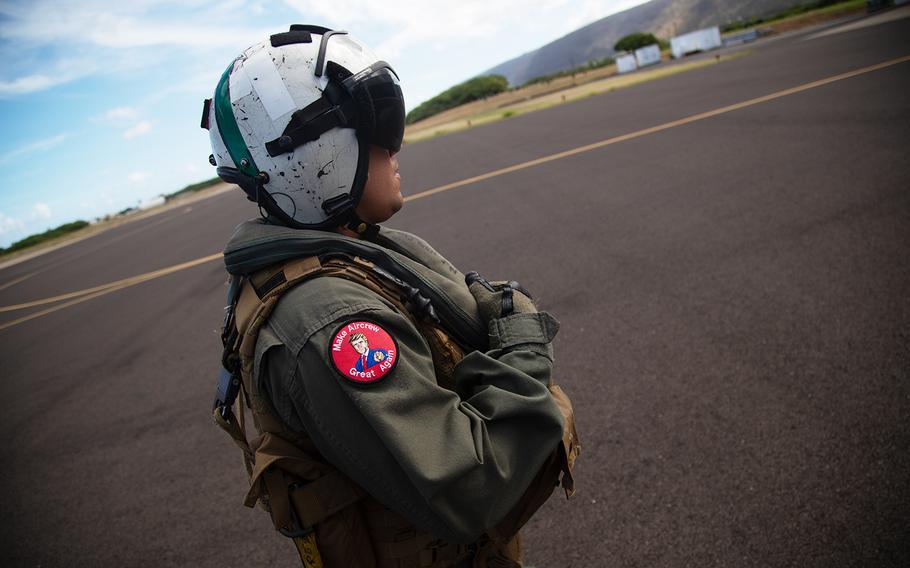 FORT SHAFTER, Hawaii — The monthlong Rim of the Pacific naval exercise, which concluded Thursday, reflected an emphasis on traditional warfighting drills as America refocuses its strategy on military competition with China and Russia.

“The U.S. has been working to incorporate into RIMPAC more substantial anti-submarine warfare, surface warfare and amphibious warfare operations, and this year they were able to do that,” said Bryan Clark, a senior fellow at the Washington, D.C.-based think tank Center for Strategic and Budgetary Assessments.

“RIMPAC this year was very much in line with the [Trump] administration’s focus on great power competition,” said Clark, a former Navy officer who helped the service develop new operational strategies.

In unveiling the Pentagon’s updated National Defense Policy in January, Defense Secretary James Mattis said, “We will continue to prosecute the campaign against terrorists that we are engaged in today, but great power competition, not terrorism, is now the primary focus of U.S. national security.”

The shift was manifested in RIMPAC by the Pentagon’s announcement in May that China’s invitation to participate in the exercise had been rescinded because of its militarization of islets in the South China Sea. Instead, navy personnel from Israel, Sri Lanka, Brazil and Vietnam were invited to attend for the first time.

“In the new geopolitical chess game, Vietnam — along with Indonesia and India — has emerged a key swing state that’s being courted by the United States given its strategic location along the vital sea-lanes and a 1,000-year long history of resisting China’s southward territorial expansion,” said Mohan Malik, a China expert at the Asia-Pacific Center for Security Studies in Honolulu.

“The significance of the RIMPAC disinvite to China and invite to Vietnam clearly signals that China’s ongoing militarization of the artificial islands is unacceptable and that Washington is no longer a mute or neutral bystander in the region.”

China’s ships had not been involved in warfighting drills in previous exercises, participating instead in disaster relief and medical response activities.

The drills This year’s RIMPAC included two separate ship-sinking exercises. Firing at the stripped-down USS Racine — a tank-landing ship — on July 12 were planes, helicopters, missiles and rockets operated by the Army and Air Force and the Japanese Self-Defense Force.

The test was commanded by the Army’s Multi-Domain Task Force set up for RIMPAC, and it was the first time the Army had fired a naval strike missile at a ship at sea.

He said the successful firing will now lead to the reintroduction of the Harpoon system on the submarine fleet to expand its lethality and capabilities.

“Today’s highly capable navies and adversary countries — the competitive countries that we are in power competition — have extremely good surface ships with very capable missile systems themselves,” Caudle said.

Overall, RIMPAC was a chance for the 25 participating nations to test out their vessels and crews amid a larger fleet.

The Royal Australian Navy brought the HMAS Adelaide, one of its two new, ultra-modern amphibious-landing ships.

“We’re on a trajectory to grow our amphibious capabilities,” RAN Commodore Ivan Ingham, who was in charge of that nation’s forces at the exercise, told Stars and Stripes in July.

“To put it simply, we’ve spent a number of years making sure that the platform is fit for purpose and capable of entering into service,” he said.

For the past couple years, the RAN has been integrating the two ships with the nation’s land forces and aircraft, he added.

That meant bringing U.S. Marines, aircraft and vehicles aboard the Adelaide for a number of amphibious assaults.

Some glitches The month was not without its problems.

“We had some weather systems and other realities, such as the second [target ship] being sunk earlier than expected, that impacted our ability to complete all our training according to the plan, but that is also the great part about RIMPAC,” said Royal Canadian Navy Rear Adm. Bob Auchterlonie, who served as deputy commander of the exercise’s combined task force.

“We adjusted plans and drafted new ones in order to ensure each nation got the training value they expected from RIMPAC 2018,” he said.

Mechanical problems sidelined two U.S. amphibious-assault ships, including the USS Bonhomme Richard, which had been set to lead a series of amphibious assaults, USNI News reported Wednesday. The ship “spent the second half of the exercise tied to a pier in Pearl Harbor,” the report said.

The USS Boxer never even made it to the portion of RIMPAC being held in Southern California.

It had been set to host Mexican, Canadian, U.S. and Brazilian forces for an amphibious landing exercise, and Brazil canceled participation in RIMPAC as a result, USNI reported.

Stars and Stripes correspondent Marcus Fichtl contributed to this report.