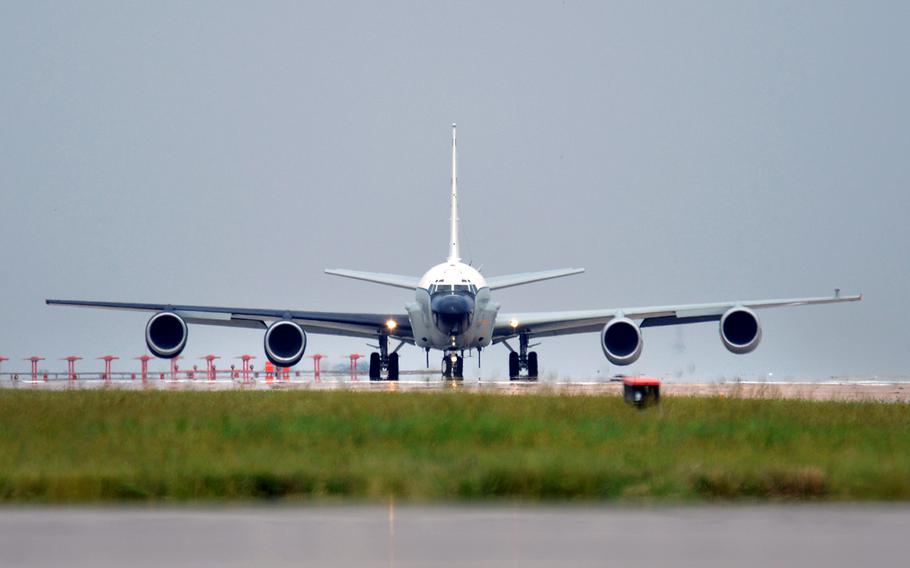 An RC-135S Cobra Ball prepares for takeoff at Offutt Air Force Base, Neb., in 2015. The Air Force has just three Cobra Balls in its inventory. (Josh Plueger/U.S. Air Force)

CAMP FOSTER, Okinawa — A U.S. reconnaissance aircraft that specializes in surveilling and collecting data on ballistic missiles has arrived on Okinawa amid fears that North Korea may be planning to resume test launches.

An Air Force RC-135S Cobra Ball landed at Kadena Air Base on Saturday evening, according to Satoru Kuba, an Okinawan who monitors military aircraft traffic for Japan’s Fuji Television. The 135-foot-long, Cold War-era aircraft was parked in a hangar and was still at Kadena as of Tuesday.

North Korea has rebuilt a launch site at Sohae that it had partially dismantled as part of disarmament steps last year, according to recent satellite images. However, the Cobra Ball’s deployment could also be related to flooding at Offutt Air Force Base, Neb., where the Air Force’s three Cobra Ball aircraft are permanently based.

All Cobra Balls are operated by the Air Force’s 55th Wing and manned by crews from the 45th Reconnaissance and 97th Intelligence squadrons, according to an Air Force website.

Kuba said the aircraft stopped in Europe, the Middle East, Diego Garcia and Indonesia before arriving in Japan. He said the rest of the 55th Wing deployed to MacDill Air Force Base, Fla.

Kadena officials declined to comment on the deployment due to operational security, according to an email signed Tuesday afternoon by the Media Section of 18th Wing Public Affairs. The message said the Cobra Ball is also operated by the 82nd Reconnaissance Squadron, a tenant unit of the base.

Masashi Katsuren, a spokesman for Japan’s Okinawa Defense Bureau, which represents the Ministry of Defense on Okinawa, told Stars and Stripes that the bureau had not been informed of the aircraft’s presence.

The Cobra Ball’s deployment to Okinawa comes on the heels of a second summit between President Donald Trump and North Korean leader Kim Jong Un in Hanoi, Vietnam, in February. Negotiations collapsed abruptly with Trump saying that the North had demanded too much in the way of sanctions relief.

Reuters reported last week that Trump had given Kim a list of demands that included handing over nuclear weapons and bomb fuel to the United States.

North Korea later warned that it was considering ending talks over its nuclear program and canceling a moratorium on missile testing. Secretary of State Mike Pompeo said last month that the Trump administration expected Kim to keep his word not to do so.

The Cobra Ball flies missions on behalf of the Joint Chiefs of Staff and is equipped with “a sophisticated array of optical and electronic sensors, recording media, and communications equipment,” the Air Force website said.

“The RC-135S … is a national asset uniquely suited to provide America’s leaders and defense community with vital information that cannot be obtained by any other source,” it said. “This data is critical to arms treaty compliance verification, and development of U.S. strategic defense and theater missile defense concepts.”