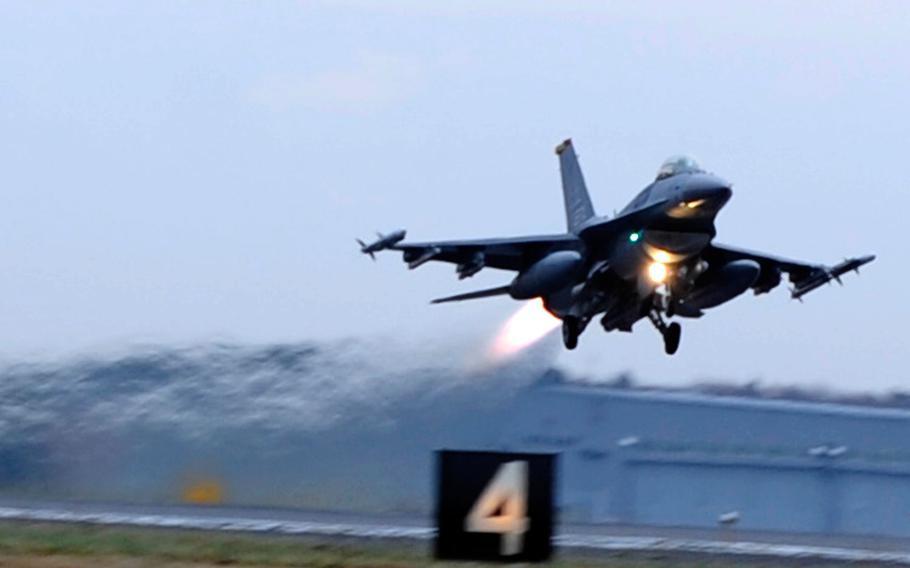 In this file photo from Dec. 7, 2011, an F-16 Fighting Falcon with the 35th Fighter Wing takes off during a readiness inspection at Misawa Air Base, Japan. (Beatrice Brown/U.S. Air Force)

YOKOTA AIR BASE, Japan — Two U.S. Air Force F-16 fighter jets made an emergency landing at a Japanese airport Wednesday, according to officials from Misawa Air Base.

The planes landed at Aomori Airport just after 12.30 p.m. after oil started leaking from one of their engines, a 35th Fighter Wing news release said.

“An oil system malfunction required the pilot to jettison the aircraft’s empty fuel tanks into the Sea of Japan,” the news release said.

The Mainichi Shimbun newspaper reported that four commercial flights were delayed 30 minutes because of the emergency landing.

It was the third such incident in three weeks involving U.S. military aircraft in North Asia.

Two Marine Corps jets were forced to land on Taiwan on March 31 after one of the aircraft experienced a mechanical issue.

The F/A-18C aircraft were flying from Japan to Singapore to participate in a bilateral air exercise when one of the planes ran into trouble, forcing it to land at Tainan Airport, Taiwan.

A week later, two Kunsan Air Base jets made an emergency landing at a South Korean commercial airport after one experienced a sudden engine malfunction.

A maintenance crew is traveling to Aomori to inspect the aircraft, and both F-16s will return to Misawa when the problem has been resolved. This incident is currently under investigation, officials said.