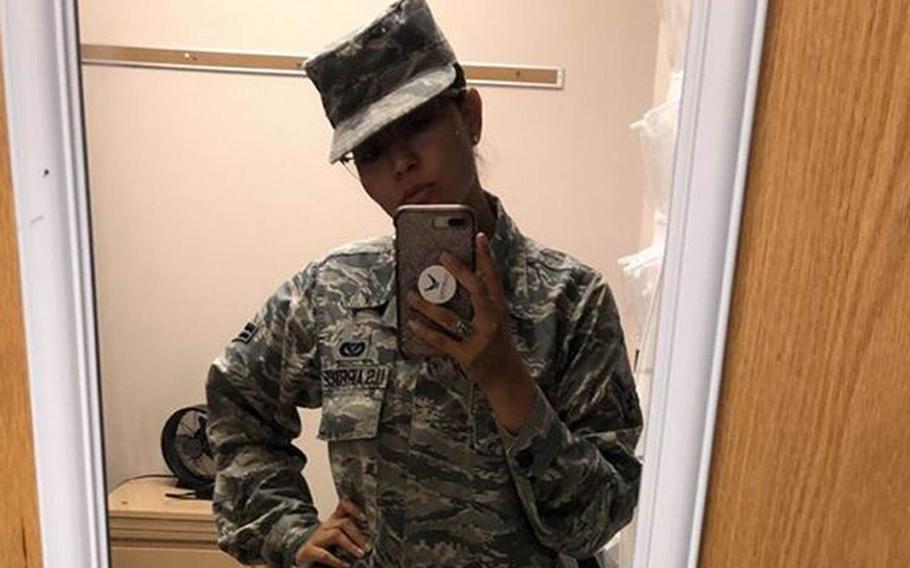 TOKYO — The chief master sergeant of the Air Force has reached out to a female airman in Japan who said on Instagram that she experienced sexual harassment and retaliation.

Airman 1st Class Sarah Figueroa posted her claims Oct. 14 along with a photograph of herself in uniform that tagged President Donald Trump, Sen. Marco Rubio, R-Fla., and numerous media outlets.

“My name is Sarah Figueroa and i am a victim of sexual harassment in the air force,” she wrote. The post claims she was sexually harassed by a coworker at Misawa Air Base, an installation in northeast Japan that’s home to the 35th Fighter Wing and about 5,700 U.S. personnel.

“Since i reported this, i’ve faced retaliation in ways you wouldn’t believe. The retaliation has even reached a point of ‘mistakes’ being made for my career development,” she wrote without providing details.

“Last week, i was followed (while driving) by the airman who sexually harassed and i feared for my life,” she continued.

Figueroa said she reported the incident to military police and her chain of command but that her commander said it was coincidence that her alleged harasser drove behind her on a small installation.

The Instagram post attracted numerous comments, including one from Chief Master Sgt. of the Air Force JoAnne Bass, who asked Figueroa to contact her via email.

“The CMSAF deeply cares about the safety and well-being of all Airmen, and her interest in Airman 1st Class Figueroa’s situation is no exception,” a Pacific Air Forces spokesperson, Sgt. Renae Rittman, wrote Thursday in an email to Stars and Stripes.

Figueroa told Stars and Stripes that she wanted to talk Oct. 16 via an Instagram message but did not respond to subsequent emails and messages.

In follow-up Instagram posts, Figueroa said she wasn’t trying to defame the Air Force or the military.

“For now I will be taking some personal time and will be staying off social media for a while,” she wrote. “It isn’t easy to have my life on display but this needed to be done, not only for myself but for the countless others that are in this same or worse situation.”

Pacific Air Forces has been looking into Figueroa’s posts, the public affairs office wrote in an Oct. 16 email to Stars and Stripes.

“We take allegations like this seriously and are dedicated to the safety and well-being of all of our Airmen,” the message said. “An investigation into those claims was done by the Airman’s chain of command. Equal Opportunity office was made aware and provided subject matter expertise on the matter.”