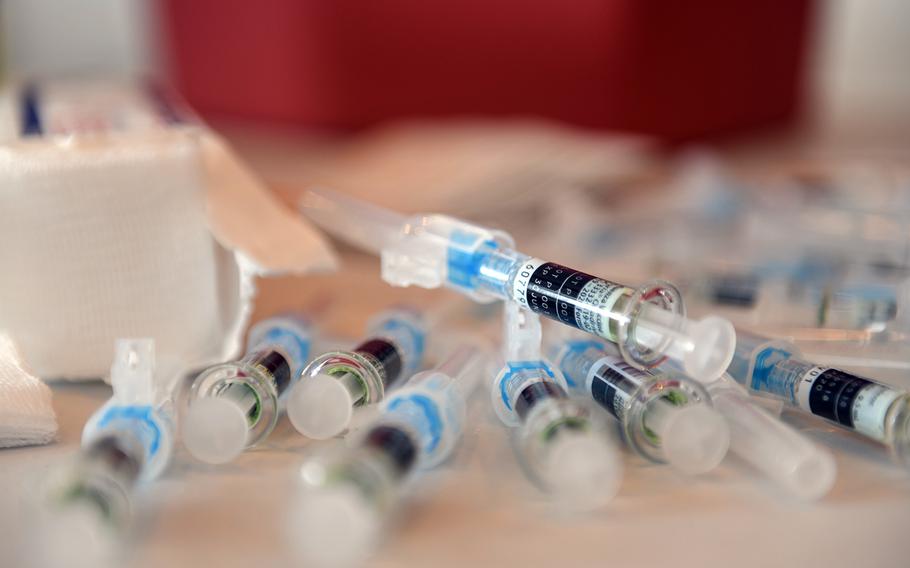 Adult vaccines were halted last week, according to an Oct. 23 Facebook post by the wing’s medical group.

“Pediatric flu shots are still available (ages 6 to 36 months),” the message said. “There is no estimated availability at this time, however, an update will be made once the new supply has arrived.”

Yokota spokeswoman Kaori Matsukasa confirmed in an email Wednesday that a broken-down fridge was responsible.

Air Force officials did not provide the number or value of doses rendered unusable at Yokota, which is home to about 11,500 service members, civilians and family members.

Safety is a top priority for the 374th Airlift Wing, Matsukasa added.

“The influenza vaccine is a temperature sensitive medical product … that must stay between 2-8 degrees Celsius,” she said. “Although there are currently no vaccinations for persons above the age of 36 months, the 374th Medical Group responded quickly and the reorder of the vaccination should arrive within the next few weeks.”

Officials will notify the Yokota community when new vaccine arrives, she said.

Flu season began Sept. 26 in metropolitan Tokyo, 11 weeks earlier than last year, according to a recent report by the Mainichi Shimbun. Japanese citizens were advised to take precautions since the number of flu cases usually peaks five to 10 weeks after flu season sets in, the newspaper reported.

The Centers for Disease Control and Prevention states on its website that everyone 6 months or older should get a flu vaccine every season, with rare exception.

“Flu vaccination has important benefits. It can reduce flu illnesses, doctors’ visits, and missed work and school due to flu, as well as prevent flu-related hospitalizations,” the website says. “Flu vaccine also has been shown to be life-saving in children.”

People should get vaccinated before flu viruses start to spread since it takes about two weeks after vaccination for antibodies to develop in the body and provide protection, the agency advises.

“Make plans to get vaccinated early in fall, before flu season begins. CDC recommends that people get a flu vaccine by the end of October, if possible. Getting vaccinated later, however, can still be beneficial and vaccination should continue to be offered throughout the flu season, even into January or later.”